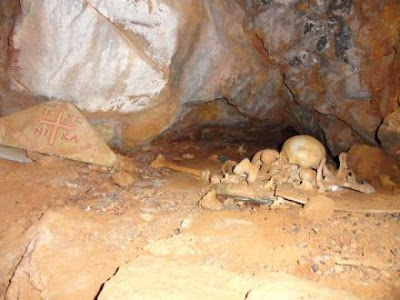 Winter. Few visitors at the Athonite Monastery. Arriving at the gate, we are greeted by the Chief Host (Archontaris) who offers to us the standard Athonite treat, raki and a loukoumi. He notifies us, to our great surprise, that in a few hours there will begin a great Athonite Vigil in the Katholikon of the Monastery. A gift from God, we said, and we thought to go rest for the all-night Service.

"Where will you go now?" was heard from the voice of the Monk as he went down below to the gardens for his active service (diakonia) as well as to feed the animals, who made known their hunger by their loud shouts.

"We have nowhere else to go, Elder: either to the Library or to our Cells for a little rest."

"Come with me so you will not leave here and get lost," shouted the Monk.

"May it be blessed," we said and immediately followed him.

We passed through the garden with its lettuce, its eggplants and its huge pumpkins which we saw for the first time, and the hospitable Monk brought us up to the garden shed, in a makeshift balcony, one would say, about 70 to 80 centimeters wide, which faces the Aegean. He began to bring out the treats at his disposal - coffee, cookies, sesame seed candy, dried bread - while at the same time he guided us through the unknown region.

Suddenly, below the wooden balcony, there appeared a ragamuffin Monk, of great age, smiling kindly, holding a sack made of hair on his shoulders. We thought the ascetics perhaps heard about the Sacred Vigil and arrived to participate.

"Elder," said the Monk to him, "wait two minutes to see our guests and that we may treat you. Come up near to us and rest. The first time uphill is difficult."

"May it be blessed," said the unknown to us Monk and like lightning he was found to be beside us.

"I am leaving to go feed the animals. They cannot wait any longer. Shut the door and go up by yourselves," said the Chief Host Monk, and he left.

For a little while silence prevailed, neither he spoke to us nor we to him. Then we realized the great difference. Out in the world, at this time in the early afternoon there is bustle, noise, commitments, jobs, stress, and continuous running. Here in the Athonite State it is a time of silence, a mystical preparation for the Mystery of Life, the Divine Liturgy. All have begun earlier, preparing quietly in complete silence, stillness, inner gladness, and mystical prayer of the heart in order to live the Mystery, to experience the event, to partake in actuality the Despotic strangeness of the immortal Table, to become an eternal diner at the table of Christ, and from there passing into new worlds to be worthy to live the Mystery in the future life.

It was then that we took advantage of the opportunity to ask of the Elder a word from his experience. "What do you want me to say? What ever I tell you will be a loss of time. I have no gifts and I do not deserve your attention. You tell me however. What is going on out there in the world?"

"The world is filled with problems, Elder" replied a child in our company. "Everyone runs around anxious, and no one is interested in the future of our young people and our country."

"Don't worry, there is a God, the end has not come. Not even the invisible Elders have been saved. This place is full of them." And he showed above us Old Man Athos.

"What did you say, Elder? Who are these invisible ones? If you want, explain this to us, we are interested in it. Have you ever seen one of them?"

At this point our anxiousness peaked, staring at the Elder motionless, as if we were not breathing at all. We wondered how such a burning and topical issue came up naturally for discussion, of which few of us had heard of.

"Do not fear. God will resurrect our nation. He is testing us because we forgot Him. Despising God, living far from Him, we have built false earthly paradises and forgot the Heavenly one. But the Saints have not been lost, nor the naked ones, the invisible Fathers of Athos. This place is full of them. When they are lost, then be afraid, because then will come the end of the world."

"Who are they, Elder? Where do they live? Do they exist even today?"

"My child, they are the invisible ascetics, the naked Athonites, the mystical Elders, who live in this garden of our Panagia, Mount Athos."

"How many are there, Elder?"

"There are plenty. Some say nine, others seven, others ten, and yet others twelve. They abide in the more isolated areas of Athos and are invisible to our eyes. They appear here and there to whomever they want, usually monks who have purified their hearts, but sometimes they make their presence felt to blessed pilgrims who live a clean Christian life.

Elder Arsenios the Cave-dweller would say in his stories that these invisible and silent anchorites live with strict asceticism and their work is unceasing prayer, that is, to pray with the heart for the whole world and for all people who are in danger.


They have received a special gift from the Lord, which is why they are able to live under snowy Athos without shelter, without clothes, while being invisible to the eyes of people. It is unimaginably difficult for people in the world to believe, yet in the last two hundred years they are increasingly being revealed. I have met in my monastic life spiritual people and Venerable Elders, who encountered before them these invisible soldiers of our Lord.

God has allowed even today, from these steep cliffs for such ascetics to emerge, true anchorites, who live in impassible Athonite places, primitive, simple and meager, and they survive by a miracle from God. Indeed, here at the Holy Mountain there is a tradition that when one of them reposes in the Lord, they are replenished by other virtuous, ascetic, Athonite Monks.

It is said that these naked hermits will be the ones who perform the last Liturgy on the peak of Athos, and after the Divine Liturgy, following the 'Through the prayers of our Holy Fathers...', the end of the world will come, that is, the Second Coming of Christ. In fact, the same will not taste death, but they will be changed, be transformed, and they will be altered even more by the Grace of God."

"Elder, where are these hermits today and where were they seen the last time? Did Fr. Paisios ever see them?" we asked.

"Look, how would I know. However, Fr. Paisios did not want us to talk about these ascetics, because they do not want such glories, as he would say to us. They are the truly smart ones, supplicating God and saying to Him: 'My God, do not give us glory on this earth, but keep it for the next life, that we may be glorified with You, there. Do not make us known here, but in Heaven.' Further, Fr. Paisios would say confidentially to pilgrims who visited him, clerics and monks, that there are seven invisible naked ascetic Fathers, who live on Athos, around which they move and rotate, and when one dies, God replaces him with a God-bearing Charismatic and Spirit-bearing Monk.

The old Elders, who were made worthy to encounter them several times, before they reposed in the Lord, they would narrate to the younger ones this encounter, how they saw them, suddenly saw them, what they felt, etc.

Come, let us go now. You have work ahead of you," said the Elder as he said his good-byes and took the path of ascent.

Indeed, we glorified the Holy God who sent us this unknown man near to us, to whom the Grace of God definitely visited and whom we met in the garden of the Monastery. He opened to us his heart, and benefited us especially by telling us such important things about the naked ascetics, emphasizing to us that our Church is revealing and daily showing us Saints, new citizens of the Kingdom of God.

We went up to the Monastery and the Vigil began, this time all of us understanding how in the wintry night we had next to us helpers and supporters in the blessed Fathers of the Sacred Monastery in which we kept vigil. Those blessed people who were motivated by Divine eros to dedicate their life to God, our visible protectors and non-deluded guides towards the Kingdom of Heaven. And surely, not too far off, others were vigilantly praying, our invisible intercessors, the ones naked to our eyes but brilliantly dressed with the uncreated Grace of our Holy God. They who with their prayers uphold the entire world. Those mystical Elders who experience prayer as a burning in the heart and chant unceasingly the ode of the Beloved with their crystalline voice, which come from inside the steep cliffs of the heavenly-neighboring Athos.

Source: From the periodical of the Sacred Metropolis of Larissa and Tirnavou titled To Talanton (November-December 2012). Translated by John Sanidopoulos.

Click:
Hardest of the Hardcore - The story of John the Romanian
St Anthony's orthodox monastery in Arizona
Patriarchal Stavropegic Monastery of St John the Baptist - Essex

The Impossibility of Aloneness: When Christ Found Me in the Himalayas
Two Deaths
Through The Eastern Gate - From Tibetan Buddhism to Orthodox Christianity
OUR TALENT OF FREEDOM & SOME PITFALLS

A Deer Lost in Paradise
LIVE, BEYOND THE LIMITS!


LOVERS OF TRUTH: THE LIFE OF HIEROMONK SERAPHIM ROSE
Lover of Truth: St John, The Wonderworker of San Francisco
Elder Cleopa Ilie
OUR TALENT OF FREEDOM & SOME PITFALLS