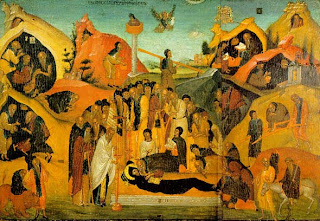 The repose of St. Ephrem the Syrian in the “ultra-desert” society
TO ΙΔΙΟ, ΕΛΛΗΝΙΚΑ
As of the 4th century A.D., the desert lands of Egypt saw the beginning of the longest-living anarchic society of all time: that of the Christian anachorites. These were people who had chosen to live there, in order to find the tranquility that was necessary for their praying. Comparatively speaking: when we want to listen very attentively to some very subtle music, we usually shut doors and windows and isolate ourselves in our quietest corner (according to fr. Sophrony of Essex).The same applies when you want to hear the voice of God – you isolate yourself in the quietest place you can find. You don’t do it out of spite or aversion to the world, or to your body or to the joys of life etc.. This has been made clear innumerable times in the history of Christianity; quite simply, the quietest place on earth that enables one to hear is the desert.
This amazing “ultra-desert” society -as it was called- albeit host to several monasteries (which were organized societies complete with a hierarchy), was basically an “anarchic” society overall, because it did not possess any authoritative structure whatsoever, except for the informal (but most essential) relationship between teacher and pupil, i.e. that of a “Geron” (Elder) and a “subject” (pupil). Every new addition to the denizens of the desert would be initiated through this form of relationship to the spiritual sciences, for example to humility and discernment (the ability to evaluate spiritual experiences). This form of relationship was liberal: you had to be absolutely obedient to your Elder (to trust him with your very life, in order to release yourself from your dependence on your personal desires), but you could also leave him to go to another Elder, or even to live without an Elder. No-one would force you to do anything.
In this society -which was replete with more love than our secular, conventional societies- many lost the path; however, thousands did attain sainthood. The “Gerontikon” (a collection of narrations about the desert Elders) mentions how saint Jacob of Panepho, when asked by a certain wavering monk to what spiritual heights a denizen of the ultra-desert can reach, the saint lifted up his arms in prayer and flames sprang from his fingertips. “If you want to, make your whole become a fire” he replied.
Naturally the ultra-desert society was not cut off from the worldwide Church, nor was it hostile towards the other expressions of Christian living. Even more so, it did not deny priesthood and the holy sacraments, which were given to us by God to help us in our union with Him as well as between us. This is why monasteries and anachorites coexisted harmoniously, while some anachorites even ended up as Bishops and Fathers of the Church, without regarding that this conflicted with “their special way” of approaching God. Anachorites would visit (or have among them) priests canonically ordained by a Bishop; they would officiate and they would partake of the Body and the Precious Blood of Christ. But in the ancient and the Orthodox Church, priesthood was not an “institution of power”; it was seen as a gift of the Holy Spirit, and the priest was not some kind of “representative of God”, but was the bearer of that gift (and of the responsibility) of performing the Divine Liturgy, of confessional and the other fundamental ecclesiastic practices and of bringing the immaculate sacraments to other Christians. As a person, that same priest could well be subject (as a pupil) to a holy teacher, who could quite easily not be a priest.
The fact that even the most “spiritually advanced” anachorites received Holy Communion is evident in cases like saint Maria the Egyptian, who, although withdrawn into the depths of the Palestinian desert for decades and herself a major teacher of holiness, God nevertheless sent her saint Zosimas to give her Holy Communion, prior to her repose (foto). 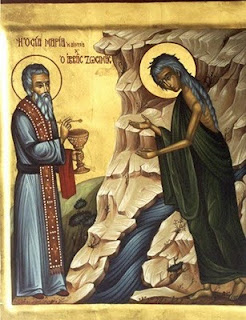 Is the ultra-desert now extinct?
I would say that this society was preserved intact up until the Muslim conquest of northern Africa, although I cannot say for certain that it has ceased to exist altogether. What is important is that soon afterwards, other, similar “ultra-desert” societies sprang up in the desert of Palestine, on the Athos peninsula, in the forests of Russia, but also in the forests of France, the islands around Britain and in many other parts of Europe, at a time when all of Europe knew of only one Christianity: the Orthodox one.
It should be noted that for every anarchic society to survive successfully, a spiritual cultivation of very high standards is imperative for its members. This was the cultivation that the Christian anachorites strove to attain: the spiritual cultivation, whose first stage consisted of the catharsis (cleansing) of the heart and whose last stage (of a lengthy and arduous course) was their union with the Triadic God through Christ (theosis-deification), which relates to the loving union with all the creations of the world. This last point also reveals that the ultra-desert society was not a “strange” kind, or one that was “mortality-oriented”, even though all its denizens were celibate. They were indeed celibate, but they were not barren: their spiritual state surpassed marriage, because marriage begins as a union with one person, whereas they strove (and succeeded, depending on the degree of their spiritual progress) for a union with everyone and everything. A monk is one who is “apart from everyone and united with everyone” (ο πάντων κεχωρισμένος και πάσι συνηρμοσμένος), according to the 4th century ascetic author, Evagrios of Pontus. Of course the word “monk” implied people of both sexes.
One more clarification: anachorites did not live entirely isolated from others, except only those who had reached the highest stage of spiritual progress (sanctity) and were able to be perfectly united with everyone without even seeing anyone (even a dedicated scientist can live entirely isolated, because he desires to apply himself without distractions to his science). These great teachers (who identified with their fellow-man to such a degree that they would even feel the other’s joy or pain as though it were their own), had even surpassed certain natural human needs: sleep, food, warmth… Actually, they were so replete with the Grace of the Triadic God (by having surrendered their whole being into His hands) that they were already savoring the heights of Paradise and therefore those needs had been overcome on their own. Their strict ascetic labours (fasting, night-vigils, sleeping on the ground, etc.) had also contributed to this union with God but these labours did not achieve that status automatically, as “there can be extreme ascesis of a suspicious nature” (to recall the words of the great Mother of the desert, saint Syncletike). The ascetic struggle in ancient –and Orthodox– Christianity aspires to the unconditional opening of our heart to God. It is not a “spiritual and physical exercise” that will activate “powers within us”, thus making us “conscientious and strong”, as is the case in the religions of central and eastern Asia.
As a rule, these hermits used to live in clusters of huts, with a short distance between them (enough for a marginal human association that would allow them to exercise that spiritual love in practice); this proximity of their abodes was also a solace in the loneliness of the desert and a guard against temptations – especially the biggest temptation of all: the illusion of having attained holiness, which in the language of the desert is called “delusion”. This is why we find so many wise dialogues between anachorites in their bios, but also so many instances of a warm and profound behaviour. The desert is not an absolute isolation. 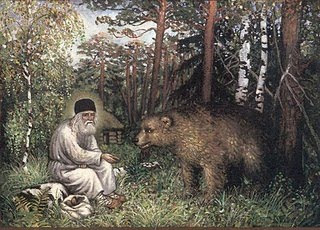 St. Seraphim of Sarov (Russia)
Secular anarchy and the desert
Modern-day, rebel thinkers who have removed God from their hearts without ever having discovered Him have instead discovered anarchism; and yet, they never learnt of the existence of this anarchic society, despite the fact that during the time they were struggling or writing about it in their own various ways, at least the Russian and the Athonite ultra-deserts were already flourishing. The latter (the Holy Mountain Athos) continues to prosper to this day, albeit confronting the various difficulties and adventures of human history.
Saints have been produced and continue to be produced, even in bustling cities, unobtrusively and humbly, in the way that befits our humble God (which is nothing like the bogey-man that others acknowledge, known as ‘morality’). Most certainly, every saint – man or woman – regardless whether they live in a condominium or a wooden shack, possibly even raising ten children, also has a piece of desert in his/her heart. They need it, in order to withdraw there and to hearken to the subtlest music in the world: prayer.
Αναρτήθηκε από ΝΕΚΡΟΣ ΓΙΑ ΤΟΝ ΚΟΣΜΟ στις 7:37 π.μ.