And Elisha died, and they buried him. And the bands of the Moabites invaded the land at the coming in of the year. And it came to pass, as they were burying a man, that, behold, they spied a band of men; and they cast the man into the sepulchre of Elisha: and when the man was let down, and touched the bones of Elisha, he revived, and stood up on his feet. (2 Kings 13:20-21 or 4 Kingdoms 13:20-21).

Every year at the end of October, America engages with a holiday that is quite strange. It has vague connections with earlier British customs and a host of modern myths about the origins of holidays. It is the cultural festival of Halloween (from the older English, “All Hallows’ Eve” or today’s All Saints’ Day). The celebration has little or nothing to do with modern Christianity (indeed a number of conservative Christian groups condemn it). It has become a festival of candy (children go house to house and are given candy at each home). But it also is a holiday that celebrates much of the modern fascination with the macabre. Children dress up in costume. Many are to be found in the guise of innocent Disney characters and the like. However, there is a long-running practice in which children are also disguised as demons, witches, zombies, etc. Television in America concentrates on the genre of “horrow movies” for weeks ahead of the candy festival and for some time following (of course there are entire cable channels in America dedicated to horrow films).

All of this strikes me as odd. It cannot be said that “horror” has modern roots in religion. America, though fascinated with vampires, zombies and the like, has, on the other hand, very little acquaintance with death (not the idea of death, but actual dead people). The American funeral industry has consistently moved away from dead bodies, embalming, viewing – all of the older trappings of death. Instead, cremation has become far more common (if not dominant in some parts of our culture). No one need see those they love in the covering of death. The funeral industry has done much to shield people from the unpleasantness of death. Here in my home in Tennessee – a local mortuary has begun to run television commercials for cremation – encouraging its practice in an area where conservative Protestants are less comfortable with such customs. When I have spoken on this topic before groups of people, I have often asked the question, “How many of you have seen a baby be born?” and “How many of you have actually witnessed a person’s death?” I am still surprised when the answer comes out to be but a small minority. There are two things people have to do: be born and die. However, it appears that a majority of modern populations have seen neither (women obviously have an advantage over men in witnessing the birth of a child).

Strangely, the same modern population has turned macabre treatments of death into an entertainment industry. The advent of highly sophisticated “special-effects” in movies have only made this industry more extreme. Older films of the horror-variety are primarily suggestive in their depictions. Current films are pornographic by comparison.

This may seem a strange introduction to a post about the veneration of saints’ relics – but it seems to me to be quite germane. For the context of modern Christianity is a world in which the stuff of death has been clinically hidden from sight – while the imagination of death has been rendered into entertainment. To suggest that there is a place for bones and bodies within the religious context simply begs the horrific revulsion of our culture. To tell the non-Orthodox that Orthodox funerals include an action called “the Last Kiss,” in which the faithful offer a reverential kiss to the body of the departed, is to suggest, for many, the unimaginable. With that, we turn to the subject of relics.

The cornerstone teaching of Apostolic Christianity, is that God became man and dwelt among us. He was fully man, flesh and bone, with a human soul. He suffered death and crucifixion. His death was real in every human sense of the word. He descended into Hades, and freed us from our bondage to sin and death. In His resurrection we are raised from the dead. He carried us with Him into the bosom of the Father.

But in that He accomplished all of this as man, as well as God, there is no “bodiless” Jesus. Christ, dead on the Cross, is no different than the two thieves dead on their crosses, or dead men and women everywhere. The women disciples who went to the tomb early on the first day of the week, did not go looking for a resurrection. They went looking for a dead body, to refresh the hurriedly wrapped and buried body of that Friday before sunset. It is in that mundane action, which would have been done for any loved one who had been so hurriedly buried, that they encountered the risen Lord. They were doing something which modern culture would pay someone else to do, but would generally be horrified were it to be asked of them.

With this image in mind, I can turn our attention to the place of relics in the Orthodox Church. From earliest times, the bodies of the saints have been recognized as a source of miracles and the power of God. You need only read the short passage from the book of Kings quoted above to know what even the Old Testament recognized as true. Contact with the bones of Elisha raised a man from the dead.


From the earliest days, disciples reverently gathered the remains of martyrs (among other objects), and preserved them carefully. They quickly (and as surely as the bones of Elisha) became objects of honor and devotion. This is perfectly natural and human, and illustrates proper piety and devotion in the light of Holy Scripture. Relics are never worshipped (such a practice is contrary to the canons of the Church). However, they are given the honor that is due them.


During extreme times of the Reformation or of the Puritan revolutions, bodies of the saints in many Western Churches, were removed from Churches and burned (not given a Christian burial, but burned like heretics). This was iconoclasm at its worst.

To this day, Orthodox Christians continue to give honor and reverence to the bodies and bones of true saints of God (sometimes including their garments or other effects). This is true not only for saints of ancient times, but for saints of modern times.

There are those who have inherited the skepticism of our culture and question relics. They assume that anything that can be questioned may (even should) be questioned. They repeat myths (like there being enough relics of the “true cross” to build a ship). This is actually a lie. There are not even enough relics of the true cross to reconstitute a single cross. But ignorance becomes more believable with repetition. 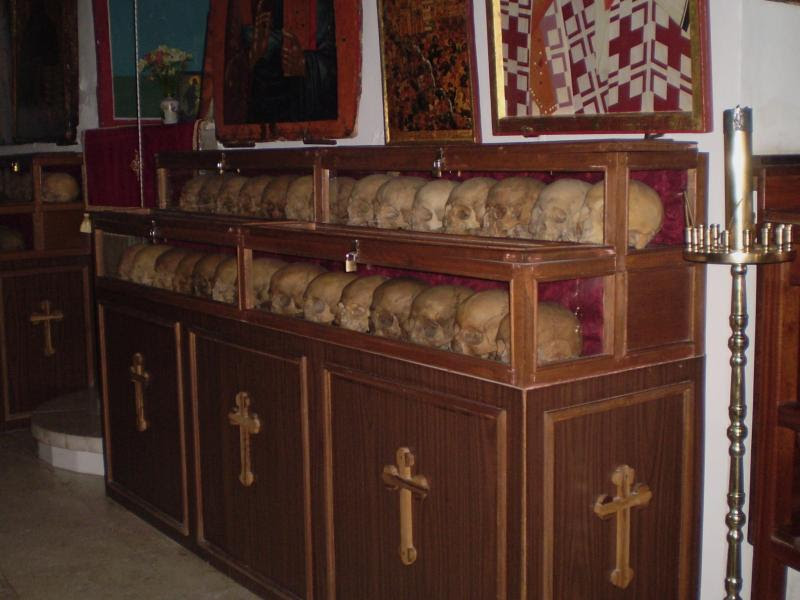 That there is a reason to venerate the relics of the holy saints is made clear in Scripture (see 2 Kings 13:21). That the Church continues to do so is simply a testament to the faithfulness of those who received the fullness of Christian Tradition. That the relics of contemporary saints continue to be places where miracles occur is simply a testimony of the faithfulness of God who “never leaves us nor forsakes us.”

That our culture is revulsed by such actions is a testimony to the deranged values that surround us. We pay money to watch make-believe films of those who eat the dead, while we would prefer not even to touch the body of our own loved ones. The Tradition of the Church in the matter of relics calls us both to be faithful to the example of our fathers in the faith, and to renounce the macabre distortions of our own culture. We despise what we should love and judge others who love what we despise. Merciful God, save us!

Two Deaths
We and the spirits of the departed
Why’s the smile of elder Joseph of Vatopedi from eternity?
Death! Death! DEATH! (The Mystery and the Process of Death)
”THEOSIS” IN SAINT SILOUAN THE ATHONITE AND STARETS SOPHRONY OF ESSEX
Orthodoxy's Worship: The Sanctification of the Entire World

Two hundred tattoo artists & a prayer with humble love for Enigma...
Miley Cyrus, or: why Orthodox Mission in the West is an urgent need...
A Different Light: Youthful Travelers in Contemporary America

LIVE, BEYOND THE LIMITS!
Why I’m not an atheist
False Black: Gothic Orthodox?
A smile from eternity & a barefoot saint in USA
Magazine "Death to the World", Punk & Orthodoxy in USA
Travelers on the Way to the Light
LOVERS OF TRUTH: THE LIFE OF HIEROMONK SERAPHIM ROSE
Lover of Truth: St John, The Wonderworker of San Francisco
The holy anarchists
Klaus Kenneth, the spiritual traveler
The Impossibility of Aloneness: When Christ Found Me in the Himalayas
“Orthodoxy and the Religion of the Future”
To my Indian – Hindu brethren
Αναρτήθηκε από ΝΕΚΡΟΣ ΓΙΑ ΤΟΝ ΚΟΣΜΟ στις 9:49 μ.μ.