American Carpatho-Russian Orthodox Diocese of the U.S.A.
ΓΙΑ ΤΟΝ ΙΔΙΟ, ΕΛΛΗΝΙΚΑ
Submitting my soul to the mercy of God,and asking everybody's forgiveness and forgiving everybody,and remaining faithful to the Orthodox Catholic doctrines up to my last minute, believing and professing myself, and submitting myself to the prayers of all....
With these words, our Holy Father Alexis Toth composed his last will and testament shortly before his death in Wilkes-Barre, Pennsylvania in 1909. In this year of the centennial of his falling-asleep in the Lord, we especially honor the memory of this Carpatho-Rusyn priest who was an inspiration, example and also a warning for the founding fathers of our Diocese. St. Alexis was born in a Carpatho-Rusyn family of priests, both his father and brother were priests and his uncle was a bishop. Like most Carpatho-Rusyns of the time, the Toths were Eastern Rite - Uniate Catholics. After completing his seminary education, he married Rosalie Mihalich, the daughter of a priest in 1878, was ordained to the priesthood and assigned as the second priest in a Greek Catholic parish. While serving there, his wife and their only child died. Father Alexis was later appointed secretary to the Bishop of Presov and Chancellor of the Diocese and taught Church History and Canon Law in the Presov Seminary.
The pivotal time of Father Toth's life began with his arrival in America in November, 1889 to become the first pastor of the new Greek Catholic church in Minneapolis. Five weeks after his arrival, Father Toth, following Canon Law, presented his credentials to the local Roman Catholic bishop, Archbishop John Ireland. Learning that Father Toth had been married, the Archbishop refused to recognize him as a legitimate Catholic priest and forbade him to function as a priest anywhere in the Diocese. Archbishop Ireland was a leader among a movement in the Catholic Church aimed at Americanizing the Catholic Church. Their views had no place for the use of the Eastern rite in Liturgy by foreign speaking immigrants with married priests.
Having served as a professor of Canon Law, Father Toth knew his rights and continued serving the needs of his flock. He set about raising funds for needed church items, purchased a house for use as a rectory and even opened a small grocery store for which he served as a baker. With his small income, he provided not only for himself but gave assistance for his poor parishioners and paid for a caretaker and cantor for the church. In 1890, all of the Uniate priests then serving in America gathered for a meeting in Wilkes-Barre to discuss the open hostility they were all receiving from the local Roman Catholic hierarchy. In response and as a punishment for this meeting, all the priests in attendance were recalled to Europe by their bishops.

Recognizing that the Greek Catholic clergy and faithful would always be treated as inferiors in the larger Roman Catholic Church and that the Union with Rome had been forced upon the peasant Carpatho-Rusyns, Father Alexis relates:

I made up my mind to do something which I carried in my heart for a long time, for which my soul longed: that is, to become Orthodox. But how was it to be done. I had to be very cautious. The unfortunate Union, the source of our decline and all our ills, had been part of our people too long. We had already borne that yoke on our shoulders for 250 years. I fervently prayed God to grant me the power to make all this clear to my unenlightened parishioners.

After contacting the Orthodox Bishop Vladimir who was residing in San Francisco, Father Toth traveled there and was received into the Orthodox Faith by the bishop. An eyewitness of this event, the parish choir director Paul Zaichenko wrote:

In the Russian Orthodox Cathedral of San Francisco, Bishop Vladimir is serving the Divine Liturgy. The choir, under my direction, is singing splendidly. In the center of the church stands a stranger. He is clean shaven, with a short military haircut. He wears a cassock, fastened with a row of buttons, and around his waist is tied a wide purple sash...All eyes are on him, but no one knows who the stranger is. Bishop Vladimir, in all his vestments, comes forward from the altar, holding the Bible and the cross. According to the Church ritual, the stranger is accepted into the Orthodox faith. In a loud voice, he renounces papism and enters the fold of the Holy Orthodox Church. At that moment his face lights up with an internal light. This new convert was Father Alexis Toth, young, handsome, and energetic...

Bishop Vladimir traveled to Minneapolis in March, 1891 and received 361 parishoners into the Orthodox Church. Uniate priests and people throughout America took note of Father Alexis' courageous action and he found ready listeners as he enlightened his Carpatho-Rusyn brethren of the false teachings and deceptions which had misled them for generations. Through his efforts, over 17 parishes returned to the Orthodox Faith and an estimated 25,000 people.

Father Toth's life was not without struggle and hardship.. From the time he was received into the Orthodox Faith in 1891, it took over a year for the Holy Synod of Russia to officially accept Father Toth and his flock into the American Missionary Diocese. During this time Father Toth was without any salary, his only income was the paltry trebe or gifts he received from baptisms, weddings, and funerals. Despite his poverty, Father Toth was accused of selling out the Christian Faith to the Muscovites for a huge sum of money, he was accused of stealing orphan's money in Hungary before fleeing to America, and in Old Forge, Pennsylvania, he narrowly escaped serious injury or death when a rock was thrown at his head through the rectory window. Returning from his missionary journey to Northeastern Pennsylvania, he found that his own flock had turned against him which caused him to move to the newly-converted Orthodox parish in Wilkes-Barre, Pennsylvania. Recalling this tragic event, Father Alexis later wrote to his Bishop Nicholas:

...these same people, for whom I sacrificed everything and who, during the attacks of the Papists, stood as strong as a wall, and whom I had been protecting and saving, became so ungrateful...It was told to my face that "we do not want the ‘Hungarian' as a priest anymore - we need a Russian priest!" ... So I left Minneapolis and moved to Wilkes-Barre.

Father Alexis endured all of his sufferings with the help of his faith in the Lord. He wrote:

I lived through very difficult days. But regardless of the difficult situation and privations, I did not rescind from my temporary thorny road. The Lord gave me strength to overcome the difficulties of being scorned and disdained as a slave of my past connections. All this trouble with its many uncalled for offenses against me, I was able with the help of God to overcome. Glory to God for His great mercy.

Father Toth's health began to decline in 1908 and he fell asleep in the Lord in Wilkes-Barre on May 7, 1909 and was buried in a magnificent mausoleum behind the altar of St. Tikhon's Monastery Church in South Canaan, Pennsylvania. He body was exhumed from his tomb in 1994 and placed in the special shrine in preparation for his official glorification as a saint with the title: Confessor of the Faith in America. 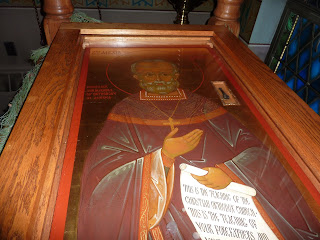 The example of St. Alexis, along with his tireless preaching and teaching of the Orthodox Faith in the mill and mining towns throughout the eastern United States was undoubtedly influential on Father Orestes Chornock and other Uniate clergy as they faced a new era of misunderstanding, mistreatment, and changes to their faith by the Roman Catholic hierarchy. After their repeated appeals to Rome fell on deaf ears, the founders of our Diocese followed the path first trod by St. Alexis in returning to the Orthodox Faith of their ancestors. However they observed what had happened in the 17 parishes received into Orthodoxy through the efforts of Father Toth. In time the unique Carpatho-Rusyn identity of these people was suppressed in favor of an invented Russian identity which continues in many places to this day. Their ancient congregational style of singing known as prostopinije was suppressed as some sort of Uniate invention in favor of Russian music sung by a choir with the congregation as passive listeners. These observations led the founders of this Diocese to coin the motto Ani do Rim, ani doMoskvi! (neither to Rome nor to Moscow!) as they sought refuge and protection under the Ecumenical Patriarch of Constantinople.

The life of St. Alexis also challenges us in his relentless and courageous pursuit of the truth of the Gospel. One of the pamphlets he wrote and distributed in his missionary work was titled Where to Seek the Truth. The challenge for Orthodox Christians living in America today is  the dangerous yet common belief that there is no one truth but that each person follows  whatever is true for them. Truth is not objective but subjective: I decide what is right and
wrong, what is true and false, truth is not revealed from God on high and disseminated to  mankind. While our respect for people of other beliefs has led to relative peace among the many religions of America, the price has been the embrace of a non-Biblical, non-Christian teaching that there are many paths to God, I have my path and you have yours and they are all equally valid. This new view now demands that we question and change the meaning of such
previously basic institutions as family and marriage. In today's society, to declare that there is  objective right and wrong, sin and virtue, truth and falsehood is to be labeled bigoted, old-fashioned, narrow and exclusive. St. Alexis, by his struggle to return to the truth of the Gospel, inspires us to continue to seek the truth revealed by the Lord Jesus Christ to an unchanging Church that continues in the Faith of the Apostles.

Click:
Orthodox Carpatho-Russia: The People From Nowhere
The Stories of the Saints of North America
A Letter from an Orthodox Christian to our Indian Brothers