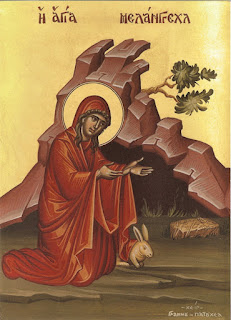 SAINT MELANGELL -  Celtic landscapes have a way of stirring the human heart with their majesty and grandeur. They bring to mind the courageous and extremely self-sufficient saints who abandoned everything for a life of solitude and prayer in isolated, even treacherous, environs. These saints, by their holy and unconventional lives, conferred peace upon the land and the creatures because they had been liberated, at least in part, from their fallen human nature. As the Apostle Paul succinctly states: "For the creation waits with eager longing for the revealing of the children of God... because the creation itself will be set free from its bondage to decay and obtain the glorious liberty of the children of God." (Romans 8:19,21).

St. Melangell (pronounced Mel-en-geth) is one of these saints who achieved such liberty. Through her consecrated life, she helped free the people and creation in the vicinity of her struggle to attain their supreme status of beauty and completion in God.

Although the major life of St. Melangell was not written until the fifteenth century, it is likely that her cult flourished long before a life was written about her, so great was the esteem with which she was held by the local populace.

The actual era and lineage of St. Melangell are disputed. However, even in the misty shadows of her Irish and/or Welsh genealogy, it is certain that she was of royal or noble lineage and, thus, was expected to marry. In response to God's call to a life of prayer and solitude, St. Melangell renounced her royal status for the religious life. Overlooking her boldness, her father insisted that she marry. Desiring above all things to be devoted to God alone, she fled Ireland around 590 and settled in Pennant, one of the most lonely and lovely areas of Montgomeryshire (present-day Powys), at the head of the Tanant Valley in Northern Wales. In this spot, which came to be called "Pennant Melangell", sleeping on bare rock with a cave as her cell, she lived a hidden life of prayer for almost fifteen years.

Around 604, St. Melangell was "discovered" by the Welsh Prince of Pengwern Powys, Brochfael Ysgithrog, while he was hunting in the area around Pennant. As his hounds pursued their prey, the frightened hare ran into a bramble thicket for safety. Searching for the hare in the thicket, the Prince unexpectedly found St. Melangell. She was deep in prayer and had not heard the dogs or the horn or the sound of human footsteps. The breathless hare had hidden itself in the folds of her garment and peered out at the fierce hounds, trusting in its holy protectress. Prince Brochfael signaled the dogs to snatch the hare, but they dared not approach the saint nor would they kill the hare.

Aware now of the situation, St. Melangell bravely drove the hounds back. The Prince had never experienced anything like this before. He was utterly amazed and cautiously approached the anchoress for an explanation. After hearing her story, Prince Brochfael, deeply moved by St. Melangell's beauty, purity and love for God, had no choice but to acknowledge her sanctity. Nonetheless, he suggested that she leave her solitude and be wedded to him, but she adamantly refused. Impressed by her sanctity and determination, he donated a parcel of land, which included a churchyard and valley, to be used by her to found a monastery. The Prince expressed his fervent wish that the area be dedicated to the service of God. He also requested that the land be a place of refuge for people and animals, in particular the hares she had befriended long before the encounter with Prince Brochfael. 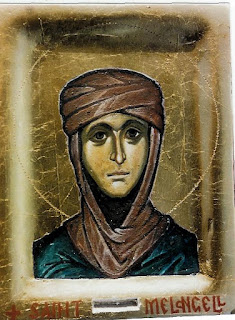 Icon from here
St. Melangell is reputed to have lived some thirty-seven years after the hunting incident. The area did indeed become a sanctuary under the anchoress' guardianship. During her life, no animal was ever killed on her land. A known haven of safety not just for hares, but for all creatures, even wild animals living in the area became tame.

Humans, too, sought asylum from persecution, confident that neither prince nor chieftain would set foot upon Pennant Melangell in an attempt to violently seize them or demand unjust tribute. In time, St. Melangell became abbess of a community of virgins who had been drawn to her holy example, seeking their freedom as daughters of God.

The Church of Pennant Melangell is located near Llangynog in Powys. From its first foundation in the seventh century, it was a regular place of worship for the local farming community. For centuries no one would kill a hare in the church or vicinity of Pennant Melangell. Also, if anyone shouted at a hunted hare "God and Melangell be with thee", it was sure to escape. To this day, in honour of the saint, the hares are respected by the local hunters and are never harmed. After her death, St. Melangell became the tutelary saint of hares. Today, she is recognized as the Celtic patroness of [hares, other small] animals and of the natural environment.

Through her resolve to maintain her spiritual focus at any cost, St. Melangell reached a life of "glorious liberty" in which she truly participated as a daughter of God. Local tradition holds that St. Melangell was specially called by the Lord Himself to restore the Pennant Valley to Paradise. Hence, her very presence imbued the land, creatures and people with joy, peace and security. Her community imitated and memorialized her life, bequeathing the essence of sanctity to the area forever.
(From here) 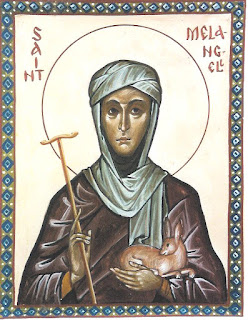 St. Melangell the Righteous of Wales (From here)
Mil engyl a Melangell  (Melangell with a thousand angels)
Trechant lu fyddin y fall.   (Triumphs over all the powers of evil.)

Μεγαλυνάριον.
Χαίροις βασιλόπαις θαυματουργέ, ἄνθος τῆς ἐρήμου, τῶν παρθένων ἡ καλλονή, χαίροις ἐλεῆμον Ὁσία Μελαγγέλα· ἡ δόξα Οὑαλίας ἡ πολυσήμαντος.
(From here)
Apolytikion in the First Tone (amateur translations below)
(written by Abbess Isidora Agierotheitissa)
Through your righteous ways and angelic life, you pleased God and were proved, O Melangella, for you abandoned your noble birth, and royal riches and honor, and came to the desert, becoming a mother to virgin nuns. Hail, O root of Ireland, hail, O boast of the Celts, hail, O lamp of Brittany and the pride of Wales.

Megalynarion
Hail, O wondrous daughter of kings, the flower of the desert, and the adornment of virgins, hail, O merciful Melangella the Righteous, the most-notable glory of Wales.
Additional hymns to St. Melangell in English available here.
Click: The Saints and the animals
A visual overview of Orthodox Saints and Martyrs of the British Church
A Deer Lost in Paradise
LIVE, BEYOND THE LIMITS!

Historical topics pertaining to the British Isles
Literature, Culture and the Western Soul
A Convert's Heritage – Western Saints
The Spirituality of the Celtic Church

To Be Free or Not To Be: Welsh Christianity at the Crossroads
The “Orthodox Option” For Anglicans
Protestantism in search of Orthodoxy
OUR TALENT OF FREEDOM & SOME PITFALLS
Orthodox America - By Issue Number
Orthodox England
"The Orthodox World"
Orthodox Outlet for Dogmatic Enquiries 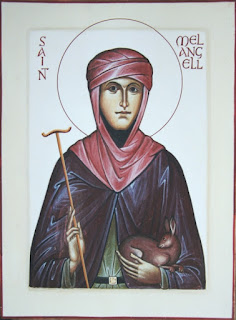