Theophany – The Waters Were Afraid


When I was seven years old, I “went forward” one Sunday morning in response to a preacher’s invitation. I wasn’t at all certain what was going on, but I mostly thought that I was “choosing sides.” Later that week, the preacher came and visited my home. He met privately with me and plied me with questions. When he was done, he shook his head and said to my mother, “He’s only seven years old, but he’s saved.” And with that, I was scheduled to be Baptized the next Sunday evening.
No one explained anything to me about being Baptized. Indeed, I’m not sure they knew of anything to explain. I was quite short, and had to tread water that Sunday evening – thus I was “bobbed” as much as I was “dunked.”
In Orthodoxy, if someone asked what is going on in Baptism, the best answer would likely be, “Everything.” In the Baptismal Liturgy, the priest prays:


But show this water, O Master of all, to be the water of redemption, the water of sanctification, the purification of flesh and spirit, the loosing of bonds, the remission of sins, the illumination of the soul, the washing of regeneration, the renewal of the Spirit, the gift of adoption to sonship, the garment of incorruption, the fountain of life. For You have said, O Lord: ‘Wash and be clean; put away evil things from your souls.’ You have bestowed upon us from on high a new birth through water and the Spirit. Therefore, O Lord, manifest Yourself in this water, and grant that he (she) who is baptized therein may be transformed; that he (she) may put away from himself (herself) the old man, which is corrupt through the lusts of the flesh, and that he (she) may, in like manner, be a partaker of Your Resurrection; and having preserved the gift of Your Holy Spirit, and increased the measure of grace committed to him (her), he (she) may receive the prize of his (her) high calling, and be numbered with the firstborn whose names are written in heaven, in You, our God and Lord, Jesus Christ. 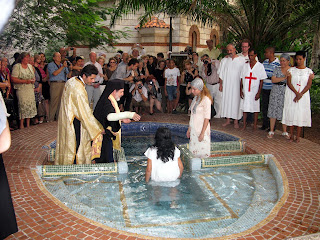 Orthodox baptism in Cuba (from here)

As far as I can tell, that is pretty much everything. For good measure, just after the Chrism is wiped off the newly-illumined, the priest says:

I have heard various accounts of Baptism that stress one of the various verbs above, but never (outside of Orthodoxy) all of these operative verbs. A legitimate question would be, “What is it about Baptism that makes it all of these things?”
In short, it is our union with the death and resurrection of Christ.


Do you not know that all of us who have been baptized into Christ Jesus were baptized into his death? We were buried therefore with him by baptism into death, so that as Christ was raised from the dead by the glory of the Father, we too might walk in newness of life. For if we have been united with him in a death like his, we shall certainly be united with him in a resurrection like his. (Rom 6:3-5)

But if all these things are true of our Baptism, what can we say about Jesus’ Baptism?
Christ’s Baptism is an entrance into His Pascha – it is His death and resurrection made manifest in the waters of the Jordan. That, of course, is a strange thing to say (or contemplate) but it is how the Church contemplates it:


The Lord refashions broken Adam in the streams of the Jordan.
And He smashes the heads of dragons lurking there.
The Lord does this, the King of the ages;
for He has been glorified.
The Lord clothed material flesh
with the immaterial fire of divinity.
Now He wraps Himself in the flowing waters of the Jordan.
The Lord does this, the Lord born in the flesh from the Virgin;
for He has been glorified.
From the Matins of Theophany

Everything about Christ’s Baptism echoes Pascha. Its feast is thus called by some, “The Winter Pascha.” When the Christian life is rightly understood, everything has this Paschal shape. It is the image according to which we were created (the Lamb that was slain). It makes it possible for us to say with St. Paul: “I have been crucified with Christ; it is no longer I who live, but Christ lives in me; and the life which I now live in the flesh I live by faith in the Son of God, who loved me and gave Himself for me” (Gal. 2:20).
This life in union with the Crucified and Risen Christ is the very heart of our existence. We are not so much “moral agents” as “cruciformed persons.” We do not merely “try not to sin,” we are “dead to sin.” For this reason, we say that prayer is the “one thing needful.” Prayer is our actively uniting ourselves to Christ, for apart from Him, “we can do nothing.”
The Cross cannot be loved from a distance or theologized at arms-length. It is revealed to us only in union. It is a continual ‘yes’ to Christ and ‘yes’ to neighbor and enemy.

The waters saw You, O God; The waters saw You, they were afraid; The depths also trembled.
The clouds poured out water; The skies sent out a sound; Your arrows also flashed about.
The voice of Your thunder was in the whirlwind; The lightnings lit up the world;
The earth trembled and shook.
Your way was in the sea, Your path in the great waters,
And Your footsteps were not known.
You led Your people like a flock
By the hand of Moses and Aaron. (Ps. 77:16-78:1) 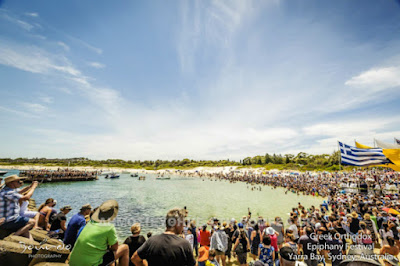 The focus of this great feast is the Lord’s baptism in the river Jordan by St. John the Forerunner.  Another name for the feast is Theophany, for it is shown—it is revealed at Jesus Christ’s baptism—that He is the Son of God.  Indeed, the Holy Trinity is revealed at His baptism, for the Father says, “This is my beloved Son in whom I am well pleased,” and the Holy Spirit descends upon Him in the form of a dove.
The meaning of the Feast of Christmas is fulfilled at Theophany, for now it is made clear that the One born in Bethlehem is truly God, come to restore our fallen nature and to renew the entire creation by uniting humanity with divinity in Himself.  And even as the Son of God entered our world at His birth, He now enters the flowing water of a river in order to make it holy, in order to bring His blessing and fulfillment upon the world that He created.  For the entire creation was subjected to futility because of the rebellion of our first parents.  As St. Paul wrote to the Romans, “the whole creation groans and labors with birth pangs together until now” for it also “will be delivered from the bondage of corruption into the glorious liberty of the children of God.”

The good news of the gospel is that the Creator has become part of the creation in order to make it a new heaven and a new earth.   We see at Theophany that nothing is intrinsically profane or cut off from the blessing and holiness of God.  All things, physical and spiritual, visible and invisible, are called to participate in the divine glory that our Lord has brought to the world, to become part of the new heaven and earth of God’s kingdom.   Christ’s baptism demonstrates that we, too, are saved along with the rest of the creation, for it is through the water that we share in His life.  “As many of you as have been baptized into Christ, have put on Christ.”  In baptism, we receive the garment of light that Adam and Eve lost when they distorted themselves and the entire creation with sin and death.  The incarnate Son of God sanctified our flesh and blood at His birth, and at His baptism He sanctifies the water through which our calling as those created in the divine image and likeness is fulfilled. 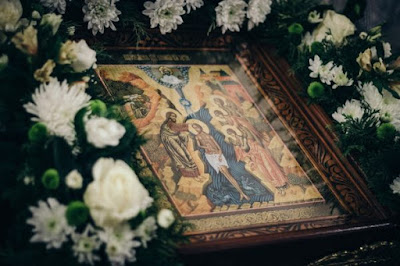 When we bless water at the conclusion of liturgy today, we will participate in our Lord’s healing of all reality, for holy water is a sign that every dimension of creation is to be sanctified, to become holy by the fulfillment of God’s original purposes for it.  Even though we pollute it and it is sometimes our enemy in storms and floods in the world as know it, God created water to sustain us and to bring life to the world.  Christ has restored water to its intended purpose by making it holy through His baptism, which is a sign of His intention for every dimension of the universe that He spoke into existence.
When you have your Epiphany house blessing this year, I will sprinkle holy water in every room of your house, which is a sign of God’s blessing upon even the small details of our daily lives.  It is also a calling to sanctify every aspect of our life and to recognize that every dimension of who we are as human beings is to be baptized into Christ, dying to sin and rising with Him in holiness. True Christianity is not escape from the world or simply a matter of emotion or morality.  No, we are called to become like God, to participate in His infinite holiness to the depths of our souls in every thought, word, and deed.
So this Theophany, we should become like the water that we will bless later in the service.  That means responding to Jesus Christ’s great blessing of the world such that we share in His life and become more fully who He created us to be in the first place in the image and likeness of God.  No, none of this is magic. If we do not cooperate with our Lord’s mercy by repentance and growth in holiness, holy water will do us no good.  But if in humility and faith we thirst for the fulfillment of our daily lives in Christ, then drinking and being sprinkled with holy water will nourish us spiritually just like water revives a shriveled plant on a hot, dry day.
Theophany makes it possible for us to quench our thirst for holiness, for the divine life for which for which we were made.  This is the joyful, blessed life of the Holy Trinity that Jesus Christ has brought to the world.  This Epiphany, let us all stop dying of thirst for God and instead be filled to overflowing by the mercy, presence, and power of the Lord.  And then, like well watered and nourished plants, we will flourish and bear good fruit for the Kingdom of God. 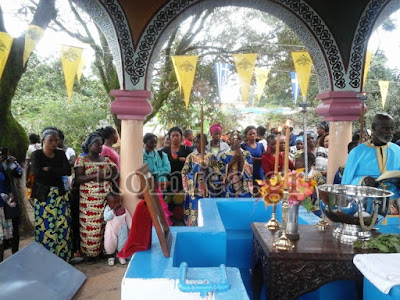 Orthodox Epiphany in Katanga, Democratic Republic of Congo (from here)

Theophany, The Baptism of Jesus Christ - When the Holy Trinity appeared clearly for the first time
God the Holy Trinity: ‘The Lover of Mankind’ (& the "depiction of God" in Orthodox Church)
God in Trinity - A Communion of Persons