The ancient Greeks, to symbolize a true meeting, used to use a split ring whose two separate halves were joined together again. In Christ the world is joined together again in symbol, in a profusion of symbols. The invisible part appears in the visible: the visible draws its meaning from the invisible. Each symbolizes the other in the 'house of the world', of which God is the 'eccentric centre', being radically transcendent.

God transcends the intelligible as well as the visible, but through the incarnation of the Logos he penetrates them both, transfigures and unites them. The world is a vast incarnation which the fall of the human race tries to contradict. The diabolos [the Greek term for devil, JW], the opposite of the symbolon, is continually trying to keep apart the separated halves of the ring; but they come together in Christ. Christian symbolism expresses nothing less than the union in Christ of the divine and the human - of which the cosmos becomes the dialogue - displaying the circulation in Christ of glory between 'earth' and 'heaven', between the visible and the invisible.

God's love for humanity wraps the spiritual in the perceptible, the super-essential in the essence. It gives form . . . to what is formless and, through a variety of symbols, it multiplies and shapes Simplicity that has no shape.
-St Dionysios the Areopagite, The Divine Names

God himself is simple and unlimited, beyond all created things . . . because he is free of any interdependence.
-St Maximos the Confessor, Ambigua 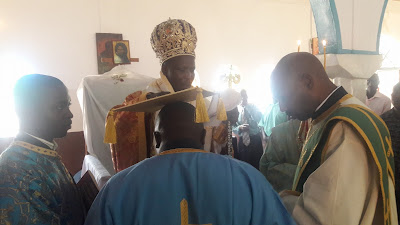 So everything is symbolic: all creatures, however lowly, and their relationships, their balance, in which life springs unceasingly from death. The purity of matter, that point of transparency at the heart of things, reaches its perfection in Mary's fruitful virginity. Alongside the utilitarian use of objects, or rather by means of it, one must learn to contemplate the flowering of heavenly realities in them. There is not only the horizontal concatenation of cause and effect. Each created object when contemplated 'vertically' expands to infinite horizons. Only this 'vertical' knowledge can clarify the scientific quest and limit and guide its technical power. Homo faber (Man the Maker) suffocates himself and suffocates the world if he is not in the first place homo celebrans (Man the Worshipper).

Kiss The Who's What? (A Holy Kiss)
The Way - An introduction to the Orthodox Faith
Theosis (deification): The True Purpose of Human Life
What do we mean by “Fathers of the Church”?
The ancient Christian Church - About Orthodox Church in the West World...
Posts in English in our blog