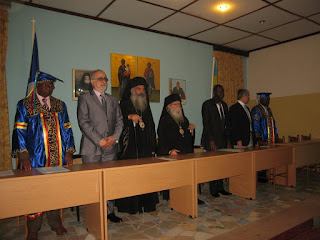 Athanasius was born in Trebizond of God-fearing parents. He became orphaned at an early age but, by the Providence of God, a commander took him under his care and brought him to Constantinople to be educated. Because of his meekness and humbleness, he was the favorite of his peers. During the children's games, the children chose one to be an emperor, one a commander and Athanasius as abbot as though it was some kind of foretelling! Having completed his education, Athanasius (who before tonsuring was called Abraham) withdrew into the desert of Maleinos near Athos, the Holy Mountain, where he lived the life of an ascetic as a disciple of the then renowned Michael Maleinos. Desiring a more difficult life of mortification, Athanasius settled on Holy Mt. Athos to live in silence (the life of a silentary). But many who were desirous of a life of asceticism began to gather around him and, therefore, he was compelled to build his famous Lavra [monastery]. In that, he was assisted by the Byzantine emperors: at first, Nicephorus Phocas, who himself thought to withdraw and to become a monk and, after him, John Tzimiskes. 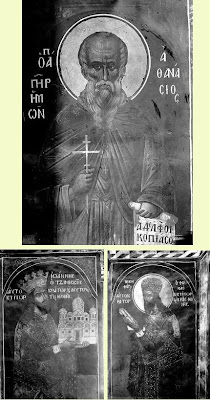 Icon of St. Athanasios the Athonite, along with those of the imperial founders of Megiste Lavra, Emperors st. Nikephoros Phokas [right] and John Tzimiskes (source)
Countless temptations befell Athanasius both from demons and from men but he, as a brave soldier of Christ, resisted and conquered all by his immeasurable meekness and continual prayer to the Living God. Filled with the Grace of God, Athanasius was made worthy to see the All-holy Birth-giver of God who miraculously brought forth water from a rock and promised that she would also be the abbess [Ikonomisa, the one in charge of the provisions of the monastery].

[By striking the rod, how did Moses bring forth water from the rock? How did God send down manna from heaven and feed the people of Israel in the wilderness? Thus, ask all those who have a very weak conception of the might of the Omnipotent God. And still they are perplexed why such miracles do not take place again in order that all peoples may believe in God. But the Israelites, with their own eyes, witnessed countless miracles of God and still they did not believe. Meanwhile, God repeats the old great miracles wherever and whenever it is needed. One time, when a famine ensued in the Lavra of Athanasius, all of the brethren dispersed whereever. Dejected, Athanasius began to move about and to seek out another place. A lady on the road asked him: "Where are you going?" "Who are you?" Athanasius asked bewildered because he sees a woman on the Holy Mountain, where access to women is not permitted. "I am she to whom you have dedicated your community. I am the Mother of your Lord." Athanasius said: "I am afraid to trust you, for even demons can manifest themselves into angels of light. With what shall you prove to me the truthfulness of your words?" Then the Holy Birth-giver of God said to him: "Strike your rod upon this rock and you will know who I am that speaks to you. Know that I am always remaining the Abbess - Ikonomisa of your Lavra." Athanasius then struck the rock with his rod. At that moment the rock shook and cracked as thunder and water gushed forth from the shattered rock. Frightened, Athanasius turned so as to prostrate before the Holy All-pure One but She had already vanished. He returned to his Lavra and even to his greater amazement, found all the barns (storehouses) overflowing with wheat. Here, then, is a repetition of the great miracles by which the miracles of old are confirmed and by which the faithful are strengthened in the Faith.] 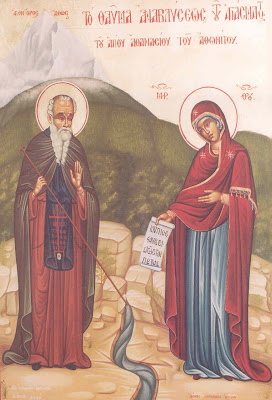 Icon of Panagia appearing to St. Athanasios and the miracle of the water (source)
In work and in prayer, Athanasius surpassed his brethren and loved all with the love a spiritual father and shepherd. Death came to Athanasius unexpectedly. At one time, he with six other monks, climbed upon a newly built vestibule of the church to inspect the wall which was being constructed and the wall caved in on them and buried them. Thus, this great beacon of monasticism died in the year 980 A.D. Many times following his death Athanasius appeared to his brethren either to comfort them or to reprimand them."
(above texts taken and rearranged from the Prologue of Ochrid by St. Nikolai, from July 5, source) 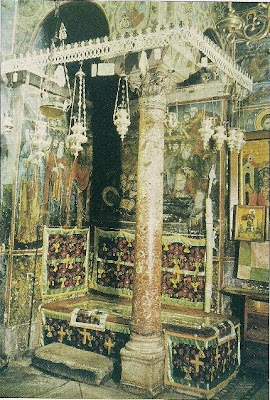 
"The Holy Monastery of Megiste Lavra is on the south-eastern side of the Athos peninsula at a place called Melana, an area where fragments of monuments which take us back to the pre-Christian era are to be found.
The Lavra occupies first place in the history and hierarchy of the monasteries of Athos, and its founder was the most honoured figure among the monks of the Holy Mountain - St Athanasius the Athonite. It was St Athanasius who introduced into what up till then had been a monasticism of cave-dwelling hermits the coenobitic system, which was afterwards to become the monastic way of life par excellence.
With the permission of the Emperor Romanus II, Athanasius began building works. Soon afterwards, his friend Nicephorus Phocas became Emperor and supported him in a variety of ways. The katholikon was built first; very soon large numbers of many nations and languages, some distinguished and others totally undistinguished, flocked to lead the monastic life under the direction of the Saint. The policy of support of Phocas was continued by his successors Tsimiskes and Basil II (nicknamed) the Bulgar-slayer, in spite of opposition to St Athanasius in some quarters. 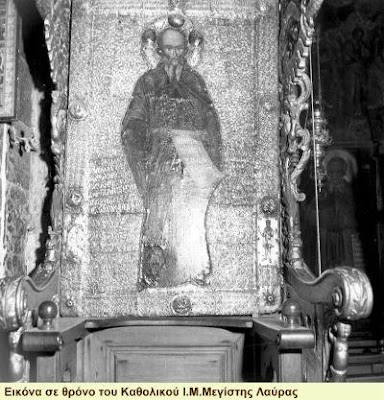 Icon of St. Athanasios the Athonite on a throne in the Katholikon of Megiste Lavra (source)
After the death of St Athanasius, the rule over the Lavra was taken over, at the command of the Saint, by the founder of the Iveron Monastery, St John, and the patrician Nicephorus Uranus. The Monastery had long been flourishing and gradually acquired many donations. Apart from the solemnion (an annual grant of gold pieces) established by Phocas and Tsimiskes, Basil II gave the Monastery an island (near Skiathos). By degrees, the Monasteries of Gomatou, Monoxylitou, and of the Amalfitans came into its possession, together with Kalykas, Xerokastron, and the Platys Gulf. These acquisitions were confirmed by imperial chrysobulls of Andronicus II and the Despot Demetrius Palaeologus (1429).


The Kral (prince) of the Serbs Stefan Dushan, like other later Slav princes, showed himself generous towards the Lavra. The Monastery remained a coenobium until the 14th century, but pirate raids led to a breakdown of its organisation and it was dealt severe blows by a number of earthquakes, such as that of 1585. The burden of taxation on the monasteries during the years of Turkish rule, borne almost entirely by the Lavra and the Vatopedi and Iveron Monasteries, also contributed to its gradual decline.


The conversion of the Lavra into an idiorrhythmic monastery in the 14th century led to it to follow a typikon (observance) all of its own, similar to those of the monasteries of Palestine. In 1574, the Patriarch of Alexandria Silvestros intervened and the Monastery returned to the coenobitic way of life, only to become idiorrhythmic again in 1670. 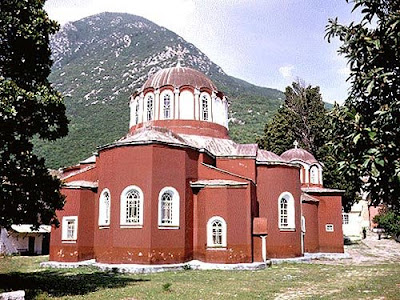 Picture of the Katholikon [=the central temple] of Megiste Lavra (source)
Although the central church was originally dedicated to the Annunciation of the Blessed Virgin, on the death of St Athanasius, he became its patron saint. The original building dated from 963, but the history of its construction passes through a number of subsequent phases, as is the case with most Athonite katholika. The wall-paintings of the katholikon are by Theophanis of Crete and those of the refectory are probably the work of one of his pupils. Outside the katholikon is the phiale for holy water, the largest on Mount Athos. The Monastery has 17 chapels and 19 outlying chapels. 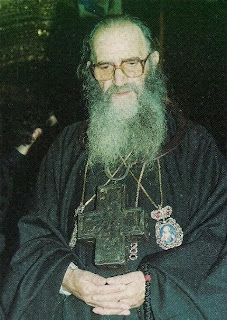 Picture of Patriarch Demetrios (of blessed memory), on a visit to Megiste Lavra, wearing the heavy cross of St. Athanasios (source)
Among the many priceless treasures of the Monastery is the icon of Our Lady Koukouzelissa, patriarchal and imperial dalmatics, and sacred relics. The library of the Lavra has some 2,116 manuscripts, 20,000 printed books, and about 100 manuscripts in foreign languages. The three famous Sketes of St John the Baptist, St Anne (Aghia Anna), and Kafsakalyvia, the groups of kalyves of Mikra Aghia Anna, Katounakia, Karoulia, Kerasia, and others, the famous kellia of Mylopotamos, St Nilus, and the ascetics' retreats of Sts Peter the Athonite, Athanasius, and Nilus are all possessions of the Lavra. The historic Kellia of Provata and Karyes also belong to it. In 1963, the Megiste Lavra, together with the whole of the Holy Mountain, celebrated its thousandth anniversary. In 1980, the Monastery returned to the coenobitic system, and today it has some 50 monks living in the Monastery and around 300 in its dependencies."
(source)
See here more information about two wonderworking icons of Panagia (Oikonomissa and Koukkouzelissa) at Megiste Lavra. 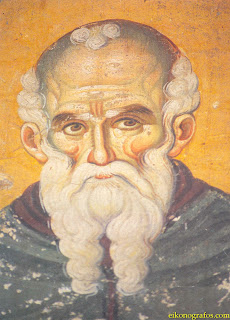 Fresco of St. Athanasios the Athonite by Panselinos, Protaton, Mount Athos (Icon courtesy of www.eikonografos.com used with permission)
Apolytikion of St. Athanasios the Athonite in the Third Tone The Angels' ranks were awed by thy life in the flesh, how, though corporeal, and clad with earthly clay, thou didst set forth with courage to invisible wars and wrestlings and didst boldly smite the hordes of the demons with mortal wounds. Wherefore, Christ rewarded thee with abundant gifts in return. Entreat Him that our souls find salvation, O most renowned Father Athanasius.


Kontakion in the Second Tone The yoke of thy Christ, thou tookest on thyself with faith, while bearing thy cross upon thy shoulders as a true and unrivalled emulator of His dread Passion and sharer of His great glory, partaking of divine and unending joy, O Athanasius.
(source)
Through the prayers of our Holy Fathers, Lord Jesus Christ our God, have mercy on us and save us! Amen!
See also

What do we mean by “Fathers of the Church”?
Ancient Christian faith (Orthodox Church) in Africa
Theosis, St. Silouan and Elder Sophrony
Theosis (deification): The True Purpose of Human Life
"Partakers of Divine Nature" - About Deification & Uncreated Light in Orthodox Church
The Uncreated Light

"THE WAY" - An Introduction to the Orthodox Faith
"We are called to holiness!" ― Two orthodox voices from Africa about the Sunday of All Saints (Sunday after Pentecost)
"That is the purpose of the Church, to make people holy" : Sunday of All Saints
The Kingdom of Heaven, where racial discrimination has no place
St Pachomius the Great of Egypt, the founder of the cenobitic monastic life
Three Africans ancients saints: Anthony the Great (the Professor of Desert), Athanasius the Great & Cyril of Alexandria
The holy anarchists... in the Egyptian Desert
Αναρτήθηκε από ΝΕΚΡΟΣ ΓΙΑ ΤΟΝ ΚΟΣΜΟ στις 1:54 μ.μ.