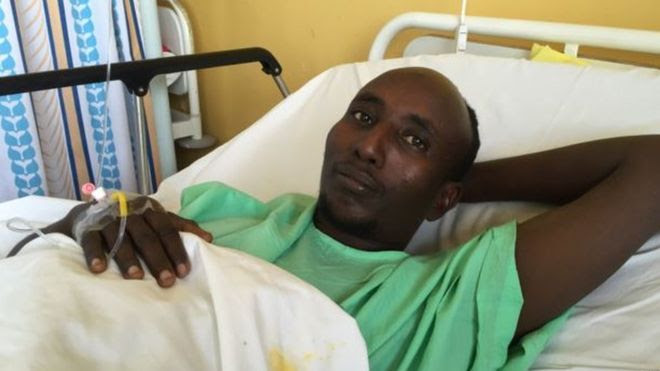 
A Muslim teacher who shielded Christian fellow passengers when their bus was attacked by Islamist militants has died in surgery to treat his bullet wound.
Salah Farah was on a bus travelling through Mandera in Kenya when it was attacked by al-Shabab in December.
The attackers told the Muslims and Christians to split up but he was among Muslim passengers who refused.
A bullet hit Mr Farah and almost a month on, he died in hospital in the capital, Nairobi.
In previous attacks in the area, al-Shabab has killed Christians and spared Muslims.
At the time, Mr Farah told the BBC's Bashkas Jugsodaay that attackers had offered him an escape.
"They told us if you are a Muslim, we are safe. There were some people who were not Muslim. They hid their heads," he said.
However, he recalled to Kenya's The Daily Nation that people were told to separate but they refused.
"We asked them to kill all of us or leave us alone."
Explaining his actions, he told Voice of America earlier this month that "people should live peacefully together".
"We are brothers.
"It's only the religion that is the difference, so I ask my brother Muslims to take care of the Christians so that the Christians also take care of us... and let us help one another and let us live together peacefully".
After his death, Inspector General of Police Joseph Boinnet paid tribute to Mr Farah, telling Kenya's Standard Mr Farah was "a true hero".
Mr Farah's brother Rashid told Kenya's The Star newspaper he hoped his brother's death would bring religious harmony and encourage Kenyans to live as one community.

More on this story

Who are Somalia's al-Shabab?
3 April 2015
Garissa attack: How it has changed Kenya

The Orthodox Church in Nigeria : Archdiocese of Nigeria, Niger, Benin & Togo
Orthodox Nigeria (tag)
From Islam to Christianity: Saints in the Way to the Lihgt
The Orthodox Christian sentiment regarding the persecutions of Christians by Islamists

Travelers on the Way to the Light
From Islam to Christianity: To our brethren who converted from Islam to Protestantism or Roman Catholicism
Paul, the Christian equivalent to Mohammed
The Penalties for Apostasy in Islam
Women Saints Who Suffered Under Islam
Traditionalist View on Sex Slavery in Islam
Helen Machankova: An Orthodox Christian New Martyr († March 15, 2013)
Islam (tag)
Jihadists - ISIS & al Qaeda in Africa
Helping Hungry Families in the Horn of Africa (2011)
Αναρτήθηκε από ΝΕΚΡΟΣ ΓΙΑ ΤΟΝ ΚΟΣΜΟ στις 3:24 μ.μ.