Africa & the Future of Orthodoxy 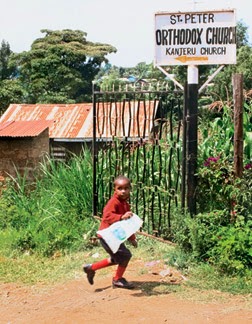 Instead, the future of Orthodoxy may be found in a Nairobi slum.  Thirty-three years ago, a small seminary was established with the brief to train leadership for the small but growing Kenyan Orthodox Church.  Almost immediately, surrounding bishops started sending their best men to Nairobi to be trained there, at the clunkily-named ‘Orthodox Patriarchal Ecclesiastical School of [Archbishop of Cyprus] Makarios III’ in Riruta Satellite, a corner of the vast Kawangware slum in western Nairobi.  The school, under the direction of Dr. Andreas Tillyrides, who would in time become His Eminence Makarios, Archbishop of Kenya and Dar es Salaam, succeeded in training clergy for the archdiocese and, increasingly, leadership for the new world of Orthodoxy taking root in sub-Saharan Africa.


I was baptized and chrismated at this seminary in 2011.  At that time there were 90 students, many from Kenya’s 300 Orthodox parishes.  But there were also students from Tanzania, Uganda, Rwanda, Zambia, Zimbabwe, Madagascar, Camaroon, and probably other sub-Saharan African countries that I’m not remembering.  In fact, this little school was and remains the only Orthodox seminary in sub-Saharan Africa.  The Alexandrian Patriarchate in Egypt also maintains a school in Alexandria, but as one might imagine there are issues in bringing African Christians to Muslim Egypt for theological training.


Several years ago, the Nairobi school was forced to close due to a financial crisis caused by the meltdown of the Greek and Cypriot economies.  Cypriot Christians in particular had been astonishingly generous and had essentially funded the activities of the Kenyan Archdiocese and its Cypriot hierarch.  But that funding all but dried up in 2012/2013.  There was no more money to pay for scholarships, no more money to pay for salaries, no more money to pay for feeding everybody.  So His Eminence was forced to send everybody home.  In 2014 as the crisis eased somewhat, the seminary was reopened and 30 students were allowed to return.  But a further 50 or so were without sufficient support to begin or continue their seminary education.  I was there in February of this year and saw first-hand the dedication of the administration and faculty to make it work with what they had, as well as the focus of the students, many of whom had made tremendous sacrifices to pursue Orthodox theological training.


It would be easy to get caught up in the details and day-to-day dramas of running a seminary in Kenya and all the logistical challenges that entails.  But if one steps back for a wider view, it becomes increasingly obvious that something much bigger is going on, bigger than Nairobi, bigger than Kenya, bigger than Africa.  The Orthodox Church has been growing impressively in Kenya for fifty years since the devastating ban, placed on the Orthodox Church by the British colonial authorities in the 1950s for its close association with the Kikuyu resistance to British rule, was rescinded.  The Church had formed during the 1920s as part of the resistance to mission Christianity by Kikuyu Christians wanting to be free of Western Christianity and have a church like that of the early Christians.  However the ban forced Kenya's Orthodox Church to start again at a time when the Roman Catholics, Presbyterians and Anglicans in Kenya were going from strength to strength.  [You can read more about this in my article, ‘Offended Christians, Anti-Mission Churches and Colonial Politics:  One Man’s Story of the Messy Birth of the African Orthodox Church in Kenya’ in Journal of Religion in Africa 43 (2013) 261-296]  And although behind in every statistic when compared to other, more wealthy Kenyan churches, the Orthodox in Kenya have been growing, and doing so for a number of years and at an impressive rate.


But the Orthodox Church is not just growing in Kenya.  As Orthodox parishes in African capitals make the transition from being ethnic expat enclaves to centers of outreach for the surrounding communities, the number of Orthodox Christians is poised to grow exponentially.  And as these nascent national Churches obtain well-trained leadership, Orthodoxy will be increasingly rooted in the local ethos and languages, no longer a Greek transplant, but a Rwandan Church, a Burundian Church, a Turkana Church, a Malagasy Church.  Protestant and Catholic scholars and missiologist have been observing for some time that the center of gravity of global Christianity has been moving south.  Christianity in Africa, with all of its raucous, noisy diversity, will lead global Christianity, first by weight of sheer numbers, and as the Church continues to mature, by an increasing theological sophistication.


The Orthodox Church does not have the same depth and breadth of history in Africa as the Roman Catholics and many of the Protestant denominations (with the exception of the Ethiopian Orthodox Church and the Egyptian Coptic Church, but that’s another story).  But the same wave that these other expressions of Christianity are experiencing will become the Orthodox experience as well.  The day is coming when there will be more Orthodox Christians in sub-Saharan Africa than in the rest of the Orthodox world combined (Russia included).  And they will be led by African bishops (as the African Churches already increasingly are:  the current bishops of Uganda, Tanzania and Rwanda/Burundi are all Ugandans).


What this means is that the most important place for the future of the Orthodox Church is the little seminary in Nairobi.  The men who will make up the leadership of the Orthodox Church of Africa are being trained there.  New seminaries will undoubtedly be established.  New monasteries endowed.  New Churches planted and consecrated.  New Christians baptized and chrismated. New catechists and readers and deacons and priests trained.  New Hierarchs ordained.  And as the African Church takes its place among the great and historical Orthodox Churches of Asia, Europe and North America, her success (or failure) will, to a significant degree, be the success (or failure) of the global Church.  The future of Orthodoxy is an African future.

Orthodox Mission in Tropical Africa (& the Decolonization of Africa)