Sunday before the Nativity of Christ in the Holy Orthodox Church 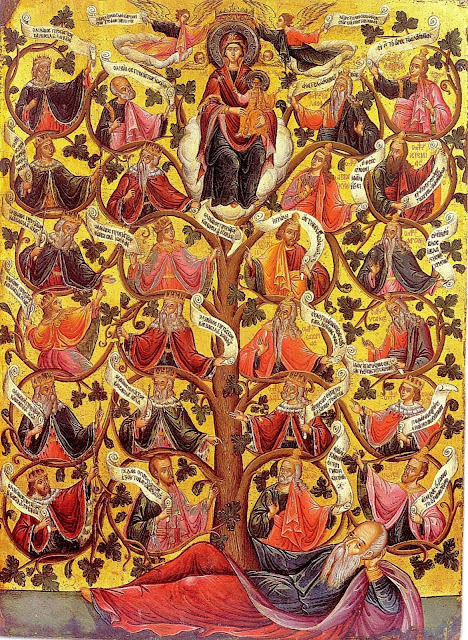 On this day, the Sunday before the Nativity of Christ in the Holy Orthodox Church, we have been enjoined by our holy and God-bearing Fathers to make commemoration of all them that from the beginning of time have been well-pleasing unto God, from Adam even unto Joseph the Betrothed of the Most Holy Theotokos, according to genealogy, as Luke the Evangelist hath recounted historically; and likewise for the Prophets and Prophetesses, especially of Daniel the Prophet and the three holy youths.

It is also known as the Sunday of the Holy Genealogy.  We remember the aforementioned names, those in the Old Testament who were related to Christ by blood, and those who spoke of His Birth as a man.  In the Divine Liturgy, we shall read of Jesus Christ’s lineage from the Gospel of Saint Matthew.  In this way, the Church shows us that Christ truly became a man, taking on human nature.  He was not a ghost, an apparition, a myth, a distant imagined god, or the abstract god of philosophers; such a god does not have a family tree.  Our God is the God of Abraham, Isaac and Jacob.  He has flesh and blood, human ancestors—many of whom sinned greatly, but like David, also repented greatly.  Yet, all of these righteous ones in every age had been well-pleasing to God because they loved Him.  By taking on human nature, the Son of God became like us in all ways, in flesh and blood, in mind and soul, and in heart and will. He differed from us in only one way: He could not sin.  Since we know that Christ’s human nature remained sinless, He is also fully divine, and He shows us the way in which we can avoid sin, and so improve and transform our human nature. 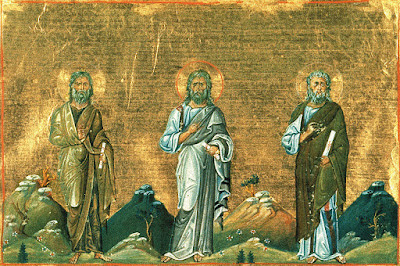 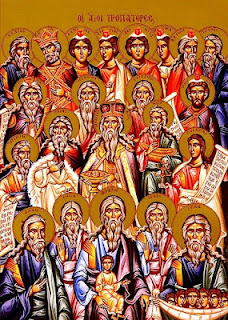 The righteous Melchizedek, King of Salem, the righteous Job, the holy Prophet Moses, the priests Hur and Aaron, Joshua, son of Nun.

By their holy intercessions, O God, have mercy upon us and save us. Amen.

ORTHODOX CHRISTIANITY THEN AND NOW: Sunday Before the Nativity of Christ Resource Page
The Sunday of the Holy Forefathers, the Parable of the Great Supper & the blasphemy of Racism (second Sunday before the Nativity) 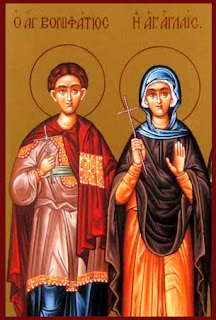 Great are the accomplishments of faith, / for the Three Holy Youths rejoiced in the source of the flame, as if by restful waters,1 / and the Prophet Daniel appeared / as a shepherd of lions as of sheep. / By their prayers, O Christ God, save our souls.

You would not worship an image made by hands, O thrice-blessed youths; / but shielded by the ineffable Essence, you were glorified through your ordeal by fire. / In the midst of the unbearable fire you called upon God, crying: / "Hasten, O compassionate One, / and in Your mercy come to our aid, / for if You will, You can do so."2

Be glad, O Bethlehem! Prepare yourself, O Ephratha; / for the Lamb is on her way to give birth to the Great Shepherd she carries in her womb. / The God-bearing Fathers will rejoice, beholding Him, / and with the shepherds, they will praise the Virgin who nurses Him.