Christianity in a Plain Brown Wrapper


Glory 2 god for all things


But we all, with unveiled face, beholding as in a mirror the glory of the Lord, are being transformed into the same image from glory to glory, just as by the Spirit of the Lord. (2Co 3:18)

Among the many losses within modern Christianity has been the place of transformation. Nineteenth century revival movements and theology emphasized a single experience that was associated with salvation. Those who concerned themselves with what came later, described growth in the Christian life as “sanctification,” and tended to imply that it was optional. Contemporary Christians have settled for a spiritual life in a plain brown wrapper ever since.
Though the word sanctification occurs in the New Testament, it is nowhere treated as subsequent to salvation itself. Being saved, in the pages of the New Testament, means the whole of our life with God. And the purpose of the whole of our life with God is to be transformed into the image of Christ from glory to glory. Anything else is simply not the Christian faith.
Many Christians recognize that a transformation is supposed to occur within a believer, but have adopted a model that postpones that change until after death. Thus we live in this world as one-time, once-and-for-all conversionists, and hope to simply wake up as saints in the life to come. And even this model is often weakened to a matter of heaven as paradise (imagined in starkly material forms).
The fullness of the Christian gospel, as found within Scripture and the Orthodox tradition, is radically committed to the transformation in this life of the believer.

Photo from here
Psychology Is Not Enough

In a self-help culture, saying that people need to change is merely an endorsement of what everyone already knows. But the movement sought within the culture needs no God. To become a better person (more fit, more affable, more kind, more considerate, etc.) is simply a description of a moral program. Morality has nothing particularly Christian about it. Morality is constituted by whatever agreed upon rules of behavior are desired at any given time. The psychological component of morality is no more than the interior adjustment to a desired behavior: behaving well and enjoying it.
The transformation wrought by Christ is the manifestation in this world of the Kingdom of God. In its fullness, it looks like the resurrected Christ Himself. It is the union of heaven and earth, the created and the uncreated. It is a transcendental reality.
That, of course, describes some few saints in some measure. But admittedly, it does not describe many, nor does it appear to describe Christians in general.
But this is a false judgment. In a psychological culture, morality and psychology are the only human realities we acknowledge. We do not see nor understand the nature of spiritual things. We are locked in a world of cause and effect and presume that everything works in such a manner. The landscape of psychological causes (and effects) is the world as we choose to see it. But it does not see the landscape of the Kingdom of God – that which is birthed in believers in their Baptism.
One of the great challenges in living an Orthodox Christian life is making the transition from psychology to true spirituality. Some teachers suggest that many will fail to do so – and will thus fail to realize the reality of their birthright in Christ.
To speak of this movement is difficult because we leave the world of cause and effect and step into the world of grace (though even the world of cause and effect is moment by moment sustained by grace). But grace works with faith and freedom – thus there is not cause and effect (else it would be forced upon us). It is this life of faith and freedom that are often so strange to us. We cling to what we know and reduce our understanding to a virtually mechanical world. There we engage in various therapies and moralities, which have the ability to change appearances but never the substance of reality.
I will use the Apostle Paul as an example in this article. He was an upright, moral man prior to becoming a Christian. He kept the Jewish law in the strictest possible manner as a member of the Pharisees. He was not a hypocrite. But neither did he know the true and living God. When he was converted on the road to Damascus, he did not suddenly take up a new moral code. He abandoned his moral ways and set himself on the road of grace. That path was one he described as “weakness.” He humbled himself. He emptied himself. He submitted to beatings and scourgings. He endured shipwrecks and the false accusations of his enemies.
But he is not a moral hero, or an example of great human achievement. What we see in his outward Christian life, is also the shape of his inmost heart. There, too, he strained towards what was impossible and beyond human reach. He pushed beyond what could be known in cause and effect. What he found was the very mystery of the Kingdom – union with God. 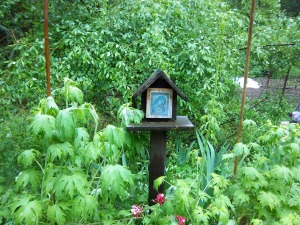 The result of this inward emptying can be seen in the fullness of grace God bestowed upon him. Miracles were worked even by cloths that had simply had contact with him. He raised the dead and cast out demons. He became so closely united to Christ that he could tell others to live as he lived.
From the outside, this manner of life can easily be mistaken for some version of moral psychology. But it is nothing of the sort. It is the impossible become reality, by the utter dependence upon the God of grace. As God told St. Paul, “My grace is enough.”
Moving from the psychological life to the spiritual life is often counter-intuitive. It sounds like it won’t work. To a certain degree it involves quitting. We quit trying to be good, and seek only to empty ourselves to God. The goodness of our lives thus becomes God’s goodness, and not our own.
The moral/psychological life is often one that cycles between effort, failure, shame and remorse only to begin again with renewed effort and promises of a better outcome. Some Christian lives never leave this cycle. It can be sheer misery. Most often it leads to disappointment and a quiet resignation to something less.
At first, embracing a spiritual life can feel like embracing failure. Indeed, it is embracing failure and weakness. The Elder Sophrony taught, “The way down is the way up.” It is, strangely, the only spiritual path that would actually be open to all believers. The worst of us can fail. Some of us learn to be very good at it!
Prayer as the emptying of self in the presence of God is a very different thing than great athletic efforts of well-kept rules. I have often advised people to keep a fast during Great Lent that is somewhat out of reach – for without some measure of failure during the fast we are in danger of reaching Pascha with a sense of satisfaction instead of true self-emptying gratitude.

Taken to an extreme, it is easy to ask (as was asked of St. Paul), “Should we continue in sin so that grace might abound?” St. Paul said “Of course not!” But the logic of the question flowed from his teaching and is more sound than the moral/psychological substitutes that others have put in its place.
But weakness is not sin. Failure is often not sin. Our emptiness is not sinful in the presence of God. True repentance (humility, brokenness, emptiness) is not a result of sin, but the return to our proper state before God.
Consider two kinds of prayer: in the first, we have a sense of the prayers that we plan to pray (say a morning service) and the psalms and readings for the day and we struggle through. It is quite possible to do this without reference to God. We are present to our prayers, but our prayers are not present to God. The heart can be completely untouched. We speak but we don’t weep.
In the second, we struggle for words. We are aware of just how unaware we are of God.  We do not flee our emptiness or our brokenness, but we embrace them. And there in that place where we can do nothing of ourselves, we call on God who can do all things. And this is the restoration of our true relationship with God and our proper existence as human beings.
To enter into a true spiritual life we must leave behind cause and effect and abandon ourselves to the Ground where God causelessly causes. And having embraced such weakness, we stand without defense before those who would slander our way of life.
And this is the ground on which the saints stand. We cannot explain their existence. The transcendent goodness of their lives and deeds, the wonders worked at their hands – all appear to have come into existence “out of nothing.” But like the whole universe that surrounds us (which was itself causelessly caused) – they nevertheless exist.
And this is the change of Most High. Glory to His name!

People as Liturgical Beings
Orthodoxy's Worship: The Sanctification of the Entire World
Theosis, St. Silouan and Elder Sophrony
LIVE, BEYOND THE LIMITS!

The Psychology of Atheism
The holy anarchists
False Black: Gothic Orthodox?
A Deer Lost in Paradise
Lover of Truth: St John, The Wonderworker of San Francisco