We usually characterize people as rational and independent beings. These attributes are correct enough, but don’t convey human nature in its completeness.

Through the liturgical experience, we feel that, more than anything, people are liturgical beings. They were made to serve, to offer themselves and the whole world to God with gratitude, praise and worship, to unite with God, to be sanctified, to live, through this continual offering/sacrifice/service.

Life in Paradise was a Divine Liturgy. Together with the angels, Adam and Eve served the Holy Trinity. With the fall into egocentrism they lost the possibility of offering themselves and the world to God in a Eucharistic manner and thus of taking part in the joint ministry in Paradise.

Self-exiled from the Liturgy in Paradise, they found themselves on earth without the function of the Liturgy. ‘The ‘in the image’ was no longer active. Some remnants and sparks from the prelapsarian function of service remained within them. These moved them to build altars and to carry out sacrifices to God.

At best, this worship was fragmentary, a shadow, a type. It didn’t bring people into perfect communion and union with God. It didn’t give us the Holy Spirit. It didn’t save us from death. It did, however, encourage in us the desire for the true Messianic Liturgy. This desire and vision gave hope to the people who were sitting in darkness and the shadow of death.

The Heavenly Father’s love could not leave us without liturgical service. By His providence, the Word was made flesh. Jesus Christ, the Great High Priest, began the joint ministry of the New Testament.

The Liturgy of the New Testament could only have been instituted by Christ, because Christ alone was able to offer Himself and the whole world completely to the Triune God. There were people who sacrificed in the Old Testament, too. There were no sacrificial victims. Jesus Christ was the perfect sacrifice and at the same time the perfect person to perform the sacrifice. The unblemished sacrifice. The Lamb of God Who takes away the sin of the world…

People -and the world- without Liturgical function, being un-liturgized fell into the power of the devil and of death. With His death on the Cross and His Resurrection, Christ redeemed us from this enslavement, liberated us and gave us the chance to take part in the joint ministry of the New Testament. That is, to offer ourselves to God, to thank God and to praise Him. In being offered and offering all things with Christ to God, we serve as people. That is ‘in the image of God’. We become real people.

The Liturgy of the New Testament is greatly superior to the Liturgy in Paradise. Now the High Priest is the Son of God Himself. The Mother of God and the Saints concelebrate and together praise the All-Holy Trinity ‘with ceaseless mouths and unflagging praises’.

Every baptized Orthodox Christian who dies in order to live takes part in this joint ministry. In this shared Liturgy people find their true nature and their true repose, their real ‘in the image of God’ self. Outside this shared Liturgy, people may be Homo Sapiens or Homo Economicus of the Socialist or Capitalist society, but not the rulers of creation, not the tipping point between the created and uncreated world and ‘in the image of God’.

The Divine Liturgy of the New Testament began with the incarnation of the Word and is continued into the far future by the Great High Priest. Every Divine Liturgy celebrated at the altars on earth is a participation in time in this timeless, everlasting Liturgy. ‘We sinners also cry aloud with the Blessed Powers, Master and Lover of Humankind, and say: ‘Holy You are and Most Holy…’.

Every Priest and Bishop who celebrates at the earthly altars ‘performs the priestly function of Christ in the Church’ (canon of Carthage). He doesn’t have his own priesthood. He takes part in the unique Priesthood of Christ.

Our greatest sin today is that we don’t have a Liturgical function. We don’t offer and aren’t offered to God and to our fellow human beings. 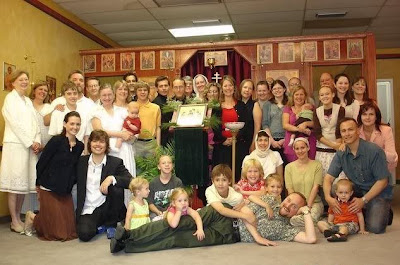 Photo from the article Musicians Who Are Converts to Orthodox Christianity
It was once considered an insult to say that somebody was ‘un-liturgized’. Today, however, because of our unbelief and hardness of heart, it’s considered natural, whereas it’s unnatural and weird for people to exercise a Liturgical function.

Even when people today ‘go to church’, it’s hard to know whether they really do exercise a Liturgical function, that is whether they take part in the Universal Mystery of the Eucharist and of the Church, whether they understand the Divine Liturgy not simply as a religious and social duty but as an offering and sacrifice to God, in Christ. It’s possible even for someone to celebrate the Divine Liturgy as a priest and yet in essence to be outside the Liturgy, because he doesn’t offer himself and all things to God.

These Christians outside the Liturgy, clergy and laity, basically don’t live. According to the Revelation, ‘You have a name for being alive, but you are dead’ (3, 1).

Liturgy has many meanings in Greek and Abbot George plays with most of them. It means ‘the Liturgy’, ‘service’, ‘ministry’, and ‘function’ and, while I have tried to find what seems to me to be the best in each instance, it has not been possible to convey the overlapping of meanings that are present in the Greek. For the term ‘αλειτούργητος’, I commend the relevant entry in Lampe, which if, you’ll forgive the pun, is most unenlightening. WJL.

People who offer ‘your own from your own, in all things and for all things’ serve God truly and pleasingly. That is, people who recognize that whatever they have is a gift from God. They believe that they’ve got nothing of their own to offer. Everything’s from God and they take from that and offer it to God, together with themselves, their world and their relations with the world. They keep nothing selfishly for themselves. They offer themselves without reservation. They give everything in order to receive everything. They die in order to live. And they offer everything in Christ and for Christ. In all things (always) and for all things (for all God’s gifts).

So the whole of people’s lives (even after the Divine Liturgy and outside the church) becomes service, offering, relationship, sacrifice, communion and thanksgiving. The whole of life is transformed into a theanthropic life.

The two hour Sunday Liturgy becomes a twenty-four hour, daily Liturgy. As Orthodox, when we speak about a liturgical life, we don’t mean our short liturgical offering in the church, but the whole of our life, which, starting with the liturgical actions in the church, becomes one of liturgy and worship.

Orthodox Christians aren’t schizophrenic. They don’t live a liturgical life inside the church and an unliturgized life outside. They spend as much time as they can in church (Liturgy and services) so that they’ll be able to live outside the church in a manner as close as possible to the spirit, the climate and the ethos of the Divine Liturgy.

Through worship in the church, the theanthropic life becomes ingrained in them and is then capable of transforming all the facets of their everyday lives.
So Christians permeated by the Liturgy live in the unity of faith and life, the divine and the human, the created and the uncreated, the living with the departed, the present age with the future, their own person with others.

This unity was also experienced by the Greek, Orthodox people when, and as long as they had an ecclesiastical life. There are still, in Greece, traditional, Orthodox people and communities who live in this unity. The centre of the whole life of traditional Orthodox settlements (villages and neighbourhoods) was the parish church, as the katholiko is in monasteries. In villages on Evia [Euboea], the parish church to this day is called the katholiki. (i.e. katholiki ekklisia). 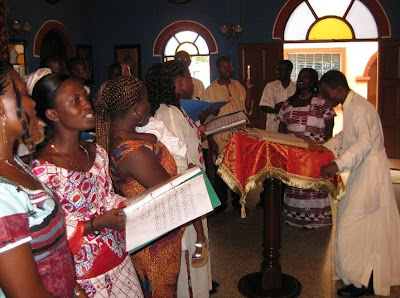 Birth, death, baptism, marriage, school, work, social relations, joys, and sorrows, all the expressions of social life were linked to the Liturgy and the Church. In the end, they became the Church. So the everyday functions of life found their unity and order of precedence within the Divine Liturgy.

The further the Greek people distance themselves from their Orthodox roots, from their life-giving, theanthropic tradition, the less the various functions of life are organically linked to the Divine Liturgy, which is why they stop working properly, which is to say they fail to unite people or help them to live as images of God.

The various functions outside the Divine Liturgy deconstruct the human person. This is clear from the basic function of life, procreation. Within the Divine Liturgy and the Church, this fundamental function is transformed, is blessed with grace, and contributes towards the rounding out of the human person. Outside, it’s the slave of egotism, it undoes personalities and is a torment. People today have bitter experience of this situation.

Orthodox coenobitic monasteries are models of how people and their communities should function. The centre is the main church (katholiko). Buildings and obediences are all organized around the main church. The starting-point of the common life is the daily celebration of the Divine Liturgy. The purpose is the worship of God and the offering of the whole of life to Christ. This is how life can be common, faith and love universal, death can be vanquished and everything made new and given a different role in a strange and most fitting adjustment.

Orthodox Christians can’t be Orthodox unless they live liturgically. Unless the Divine Liturgy and worship are not merely ‘opportunities’ or part of their timetable, but are, instead, the life-giving shoot grafted on to their lives and transforming them, the centre, the basis, the beginning and the end. It’s only through the ‘your own from your own’ in the Divine Liturgy that people truly become themselves, that is images of God.

Orthodoxy's Worship: The Sanctification of the Entire World
Theosis, St. Silouan and Elder Sophrony
LIVE, BEYOND THE LIMITS!