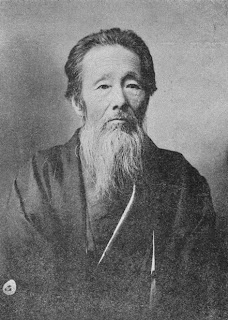 Fr. Pavel Sawabe Takuma,
the one of the first three Orthodox Christian in Japan
Δόξα Σοι, ο Θεός, πάντων ένεκεν
ΕΛΛΗΝΙΚΑ ΕΔΩ
The son of a samurai and son-in-law of a Shinto priest, Takama Sawabe was a fierce Japanese nationalist. He hated Christianity and all foreign influences in his country. One day he angrily confronted the Orthodox Christian missionary to Japan, a Russian priest-monk named Nicholas (Nicolai). Father Nicholas spoke to him:

“Why are you angry at me?” Fr. Nicholas asked Sawabe.
“All you foreigners must die. You have come here to spy on our country and even worse, you are harming Japan with your preaching,” answered Sawabe.
“But do you know what I preach?”
“No, I don’t,” he answered.
“Then how can you judge, much less condemn something you know nothing about? Is it just to defame something you do not know? First listen to me, and then judge. If what you hear is bad, then throw us out.”


Our father among the saints Nicholas of Japan, Equal to the Apostles (August 1, 1836 – February 3, 1912), brought Orthodoxy to Japan. He was sent to Japan as a missionary by the Church of Russia. He worked tirelessly among the Japanese people and established there the Church of Japan. His feast day is February 3. 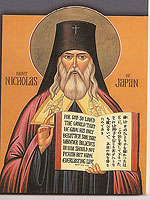 St. Nicholas, equal to the Apostles and enlightener of Japan
Nicholas was born Ivan Kasatkin in Berezovsky village, Volsk district, in the province of Smolensk. There his father, Dmitri, served as a deacon. His mother died when he was five. The deacon's family was big and very poor. Despite that, young Ivan was sent to the Belsk Theological School and later to the Smolensk Theological Seminary.

In 1857, Ivan, one of the best students, was sent to study in the St. Petersburg Theological Academy, where he demonstrated remarkable talents. When Ivan was about to finish his studies, his future mission — to preach the Orthodox faith in Japan — was revealed by Divine Providence.
The Russian consul in Japan sent a request to the Holy Synod (later forwarded to the Academy), asking for a pastor "who would be useful both as a spiritual director and a scholar, and whose private life would give a good idea of our clergy not only to Japanese, but also to foreigners." He filed a petition to Bishop Nectarius, the rector, asking to profess him and to appoint him to the Russian Consulate in Japan.
On June 24, 1860, Bishop Nectarius professed Ivan Kasatkin with the name of Nicholas in the academic church of the Twelve Apostles. On June 29, the day of Apostles Peter and Paul, monk Nicholas was ordained hierodeacon, and on June 30, when the Synaxis of the Twelve Apostles was celebrated, he became hieromonk.
The bishop's words of blessing of the young monk's new mission were remarkable: "You are supposed to live your ascetic life outside the monastery. You will have to leave your homeland and to serve God in a country that is distant and unfaithful. Along with the cross of an ascetic you must take your staff of a pilgrim, along with monastic exploits you must embark on an apostolic mission!"

In June 1860, hieromonk Nicholas set off for his duty station in the town of Hakodate, taking along the icon of Smolensk Mother of God. On his way to Japan, he met the renowned bishop of the Russian Church, St InnocentArchbishop of Kamchatka, the Kurile and Aleutian Islands (later Metropolitan of Moscow), called the Apostle of America and Siberia. In Nikolaevsk-on-Amur, he learned from the elder missionary's experience all that was necessary to continue his apostolic deeds "even to the end of the earth." (Veniaminov),
On July 2, 1861 Nicholas arrived in Hakodate. At first, to preach the Gospel in Japan seemed next to impossible. According to Fr Nicholas' words, "the Japanese of that time regarded foreigners as beasts, and considered Christianity to be a vicious church, to which only notorious evildoers and magicians could belong." It took him eight years to familiarize himself with the country, its people and language, and the customs and traditions of those to whom he had come to preach.
Nicholas learned Japanese culture and language eagerly. Especially after he met Archbp. Innocent (Veniaminov) in September 1861 in Hakodate, his motivation seemed to be accelerated. In Japan, the young Nicholas tried to keep his competence for Western languages and read foreign books. Innocent eventually found him reading Western books and scorned him. According to Innocent, all of Nicholas' efforts should have been toward learning Japanese language, culture and history so that he would be able to make a correct translation of the Scripture. Nicholas was impressed greatly with the words of Archbp. Innocent and meekly submitted and was obedient to him.
Hieromonk Nicholas attended popular gatherings to listen to visiting storytellers and Buddhist preachers. By 1868, Fr Nicholas had already mastered spoken Japanese. His knowledge of the history of Japan was deeper than that of many Japanese. In the meantime, he also learned English, which was becoming an international language. By that time Fr Nicholas' congregation numbered about 20 men and women.
In late 1869, hieromonk Nicholas came to St. Petersburg to report on the results of his work to the Synod. A decision was made "to set up a special Russian Ecclesiastical Mission to preach God's Word among pagans." Fr Nicholas was promoted to the rank of archimandrite and appointed head of the Mission.
Upon his return to Japan, the prospective bishop turned over his Hakodate congregation to hieromonk Anatole, his new associate, and relocated the missionary centre to Tokyo.

Bishop Nicholas from group picture of All Japan Council of 1882
In 1871, the persecution of Christians began in Japan, which affected many people, including Paul Sawabe, the first Orthodox Japanese, who would later become a famous missionary priest.

Building of the mission

It was not until 1873 that the persecution lessened a little and a free propagation of Christianity became possible. In the same year Archimandrite Nicholas started to build a church and a school for fifty people in Tokyo, followed by a theological school, which was transformed into a seminary in 1878.
In 1874, His Eminence Paul, Bishop of Kamchatka, arrived in Tokyo to ordain local candidates recommended by Archimandrite Nicholas. By that time, there were four schools in Tokyo: a catechist school, a seminary, a girls' school, and a clerical school; and two schools in Hakodate, one for boys and one for girls.
In late 1877, the Mission began to publish a magazine, The Church Herald, on a regular basis. By 1878, there were 4,115 Christians in Japan. In public worship and the education of local communities, the vernacular was used. The publication of books on spirituality and ethics was initiated as well.
In 1880, the Holy Synod decided to increase the staff of the Mission and to elevate the head of it, Archimandrite Nicholas, to the rank of bishop. On March 30, 1880, Archimandrite Nicholas was consecrated bishop of Tokyo in the Trinity Cathedral of Alexander Nevsky Lavra. The bishop wrote later: "During the sacrament of consecration, feelings seem to overwhelm the man against his will, his eyes get wet, his soul embarrassed. His inner being is transformed as soon as hierarchs place their right hands upon him. He stands up a totally different person than he was before kneeling down in front of the altar."
From this moment Bishop Nicholas continued his apostolic labour with even greater zeal. He completed the construction of the Holy Resurrection Cathedral (Tokyo, Japan) in 1891 and then proceeded with the translation of liturgical books, and composed The Orthodox Theological Dictionary in Japanese while continuing to attend to the needs of the numerous Orthodox communities.
The Russian-Japanese War of 1905, however, turned out to be the time of ordeals for St Nicholas and his flock. He withstood them with honour, to the great surprise of the Japanese. He found a way to help Russian prisoners of war in their difficult situation. In recognition of this unprecedented effort, he was promoted to the rank of archbishop.
In 1911, after fifty years' missionary work of St Nicholas, the Church of Japan numbered 266 communities, including 33,017 Orthodox laymen, one archbishop, one bishop, 35 priests, six deacons, 14 teachers of singing, and 116 catechists.

Throughout his life, St Nicholas set an example of a true spiritual director wholly devoted to his ministry. He was a man of inexhaustible energy, firm commitment, and outstanding efficiency. He said once: "I consider it inappropriate for a missionary to retire unless he is totally unable to serve. I have never tried on a 'robe de chambre,' not even in my dreams. I would better die on the field where God's Providence destined me to plough and sow." 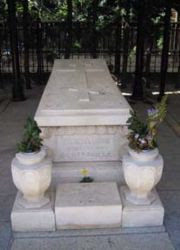 Grave of St. Nicholas of Japan in the Yanaka Cemetery, Tokyo, Japan
These words fully reflect his human nature. His private life was that of an ascetic. He never tried to perform any special feat, but rather surrendered his entire soul to God. His life was marked with hardships and willfulness, self-appraisals and tiredness, and the feebleness of an old man. However, the saint's life was a clear manifestation of success in overcoming these hardships through the fulfilment of Christ's commandments, shown to the whole world.
On February 3, 1912, Archbishop Nicholas, the enlightener of Japan, peacefully reposed in the Lord at the age of 75, to be succeeded by his assistant the future Metropolitan Sergius (Tikhomirov) of Japan. On April 10, 1970, the Church of Russia headed by Patriarch Alexis I of Moscow and all Russia decided to glorify Archbishop Nicholas naming him Equal-to-the-Apostles. Among the Orthodox, in Japan especially, St Nicholas is now venerated as a man of great sanctity and a special intercessor with the Lord.

O holy Saint Nicholas, the Enlightener of Japan,
You share the dignity and the throne of the Apostles:
You are a wise and faithful servant of Christ,
A temple chosen by the Divine Spirit,
A vessel overflowing with the love of Christ.
O hierarch equal to the Apostles,
Pray to the life-creating Trinity
For all your flock and for the whole world.