A Brief Story of St. Dymphna,
Patron of Victims of Nervous Disorders
The success of the Colony of Gheel, Belgium,
all these years can be attributed to
the intercession of St. Dymphna. 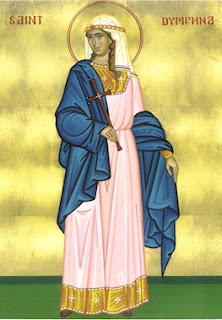 ISLE OF SAINTS has long been a title popularly given to the island evangelized by St. Patrick, which nestles in the blue waters of the Atlantic. And appropriately it is so called for the names of the Irish saints would more than fill the Church's calendar. Yet it is to be regretted that Catholics for the most part are entirely unfamiliar with so many of these glorious saints, yes, even ignorant of their very names. One such forgotten or unknown saint, who, on account of her spotless virtue and glorious martyrdom, is sometimes referred to as the "Lily of Fire," is St. Dymphna. True, the records of the life and martyrdom of this holy virgin are for the most part meager and unsatisfactory, but sufficient is known regarding the principal faces of her life and of her many well-authenticated miracles to attest to an exalted sanctity.

St. Dymphna was born in the 7th century, when Ireland was almost universally Catholic [=Orthodox]. Yet, strange to say, her father, a petty king of Oriel, was still a pagan.

Her mother, a descendant of a noble family, was, on the other hand, a devout Christian., who was remarkable both for her piety and her great beauty. Dymphna was, like her mother, a paragon of beauty, and a most sweet and winning child, the "jewel" of her home. Every affection and attention was lavished upon her from birth. Heaven, too, favored the child with special graces. Dymphna was early placed under the care and tutelage of a pious Christian woman, who prepared her for baptism, which was conferred by the saintly priest Father Gerebran. The latter seems to have been a member of the household, and later taught little Dymphna her letters along with the truths of religion. Dymphna was a bright and eager pupil, and advanced rapidly in wisdom and grace. When still very young, Dymphna, like so many other nobel Irish maidens before and after her, being filled with fervor and love for Jesus Christ, chose Him for her Divine Spouse and consecrated her virginity to Him and to His Blessed Mother by a vow of chastity.

It was not long, however, until an unexpected cloud overshadowed the happy childhood of the beautiful girl. She lost her good mother by death. Many were the secret tears she shed over this bereavement, but at the same time she found great comfort in the Divine Faith which, though she was still of a tender age, already had taken deep root.

Dymphna's father, too, greatly mourned his deceased wife and for a long time continued prostrate with grief. At length he was persuaded by his counselors to seek solace in a second marriage. So he commissioned certain ones of his court to seek out for him a lady who would be like his first spouse in beauty and character. After visiting many countries in vain, the messengers returned saying that they could find none so charming and amiable as his own lovely daughter, Dymphna. Giving ear to their base suggestion, the king conceived the evil design of marrying Dymphna. With persuasive and flattering words he manifested his purpose to her. Dymphna, as may be expected, was greatly horrified at the suggestion, and asked for a period of forty days to consider the proposal. She immediately betook herself to Father Gerebran, who advised her to flee from her native country, and since the danger was imminent, he urged her to make no delay.

With all speed, therefore, she set out for the continent, accompanied by Father Gerebran, the court jester and his wife. After a favorable passage, they arrived on the coast near the present city of Antwerp. Having stopped for a short rest, they resumed their journey and came to a little village named Gheel [or Geel]. Here they were hospitably received and began to make plans for establishing their future abode at this place.

The king, in the meantime, having discovered Dymphna's flight, was fearfully angry, and immediately set out with his followers in search of the fugitives. After some time, they were traced to Belgium and their place of refuge was located. At first, Dymphna's father tried to persuade her to return with him, but Father Gerebran sternly rebuked him for his wicked intentions, whereupon he gave orders that Father Gerebran should be put to death. Without delay, his wicked retainers laid violent hands upon the priest and struck him on the neck with a sword. With one blow of the steel, the head was severed from the shoulders and another glorious martyr went to join the illustrious heroes of Christ's kingdom.

Further attempts on the part of Dymphna's father to induce her to return with him proved fruitless. With undaunted courage she spurned his enticing promises and scorned his cruel threats. Infuriated by her resistance, the father drew a dagger from his belt and he himself struck off the head of his child. Recommending her soul to the mercy of God, the holy virgin fell prostrate at the feet of her insanely raving father. Thus the glorious crown of martyrdom was accorded to St. Dymphna in the fifteenth year of her age, on the fifteenth day of May, between 620 and 640. The day of her death has been assigned as her feastday.

The records of Dymphna's life and death say that the bodies of the two martyred saints lay on the ground for quite some time after their death, until the inhabitants of Gheel removed them to a cave, which was the customary manner of interment in that part of the world at the time of the martyrdoms. But after several years had elapsed, the villagers, recalling their holy deaths, decided to give the bodies a more suitable burial. When the workmen removed the heap of black earth at the cave's entrance, great was their astonishment to find two most beautiful tombs, whiter than snow, which were carved from stone, as if by angel hands. When the coffin of St. Dymphna was opened there was found lying on her breast a red tile bearing the inscription:

The remains of the saint were placed in a small church. Later necessity obliged the erection of the magnificent "Church of St. Dymphna," which now stands on the site where the bodies were first buried. St. Dymphna's relics repose there in a beautiful golden reliquary.

Miracles and cures began to occur in continually increasing numbers. Gradually St. Dymphna's fame as patroness of victims of nervous diseases and mental disorders was spread from country to country. More and more mentally afflicted persons were brought to the shrine by relatives and friends, many coming in pilgrimages from far-distant places. Novenas wer made, and St. Dymphna's relic was applied to the patients. The remarkable cures reported caused confidence in the saint to grow daily. At first the patients were lodged in a small annex built onto the church. Then gradually it came about that the patients were place in the homes of the families living in Gheel. From this beginning Gheel developed into a town world-famed for its care of the insane and mentally afflicted. An institution, called the "Infirmary of St. Elizabeth," which was conducted by the Sisters of St. Augustine was later built for the hospital care of the patients. Most of the latter, after some time spent in the institution, are placed in one or other of the families of Gheel, where they lead a comparatively normal life. Every home in Gheel is proud to welcome to its inmost family circle such patients as are ready to return to the environment of family life. Generations of experience have given to the people of Gheel an intimate and tender skill in dealing with their charges, and their remarkable spirit of charity and Christlike love for these afflicted members of society gives to our modern-day world, so prone to put its whole reliance on science and to forge the principles of true Christian charity, a lesson the practice of which would do much to restore certain types of mentally afflicted individuals to an almost normal outlook on life.

Renowned psychiatrists are in full agreement with this statement, and testify that a surprisingly large number of patients could leave mental institutions if they could be assured of a sympathetic reception in the world, such as the people of Gheel take pride in showing. In fact, psychiatrists state that institutions can help certain cases only to a given extent, and when that point is reached, they must have help from persons outside the institution if the progress made in the institution is to have fruition. Gheel is the living confirmation of this statement and an exemplar of the Gospel teachings on charity.

From here: The earliest historical account of the veneration of St. Dymphna dates from the middle of the thirteenth century, [but] the Bollandists have published numerous accounts of miraculous cures, especially between 1604 and 1668.


Click here: THE ORTHODOX SAINTS OF THE ANCIENT CHURCH IN THE BRITISH ISLES AND IRELAND. About two Womens' blood: St. Thomais + st. Thomais!...