We are a parish of the Orthodox Church in America, located in Ash Grove, a small town about 20 miles from Springfield, in southwest Missouri.
Our membership is multi-ethnic, with many converts to Orthodoxy. We follow the Old (Julian) Calendar. All services are in English.
Please use this website to find out more about Orthodoxy and about our life at Unexpected Joy.
Feel free to contact our pastor, Fr. Ephraim Tauck, at (417) 366-9929 if you'd like more information.
Check the monthly calendar for the service schedule.

Come join us in worship - and share the beauty of our life in Christ!

Celebrating Orthodox Life in the Ozarks 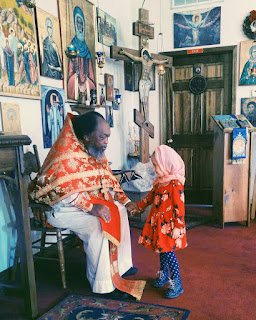 In 1998, Fr. Moses Berry moved with his family from St. Louis, MO to his family's farm in Ash Grove, about 17 miles from Springfield, MO.  The farm is a Century Farm, having been in the Berry family since 1872, and on the property is a cemetery dedicated to "Slaves, Paupers, and Indians" by the Berry's, over a century ago.  Fr. Moses felt that the cemetery needed to be maintained respectfully, and so he left a mission in the city to return to his boyhood home in rural Missouri.

A small group of faithful collected around the new mission, Theotokos "Unexpected Joy."  The first services were held in a tiny cemetery chapel, which we quickly outgrew. We moved to a larger temporary building closer to the rectory, which also served as the church hall.  In 2000 the mission was received into the Orthodox Church in America.

In 2003 we were blessed to erect a beautiful temple, and a cupola and bell tower followed. We are grateful for the beautiful iconography that adorns the church and calls us to prayer. Our mission is truly an "unexpected joy" in a small Missouri town.

Members come from all over the Ozarks to share their life in Christ.  Springfield, MO is about a half hour's drive, but some come from localities as far as Harrisonvile, Arkansas. Fr. Moses travels widely to give talks on mission and also on local Afro-American history; folks who have met him elsewhere often stop by to worship when they pass through the area. So, we are vitally connected with the larger Orthodox community while enjoying the quiet and beauty of the Missouri countryside.

Fr. Moses Berry, a priest of the Orthodox Church in America,  lives with his wife, Magdalena, in Ash Grove, Missouri, a small town in the Ozarks, on the farm his great-grandfather built in 1871.

Because they are an African American family, the Berrys are notable in Southwest Missouri for owning and living on the same property for over 125 years. Fr. Moses has restored a family cemetery established in 1875 and dedicated to “Slaves, Indians and Paupers.” This cemetery is now on the Greene County Register of Historic Sites and the National Register as well. Fr. Moses is also curator of the Ozarks Afro-American Heritage Museum. After 10 years in a small storefront, the museum collection is now available on line at http://oaahm.omeka.net. It has an extensive collection of photographs and artifacts of rural Afro-American life in the surrounding areas, preserved by the Berrys and other families over many years.

Fr. Moses is a contributor to An Unbroken Circle: Linking Ancient African Christianity to the African American Experience; co-founder of the annual Afro-American and Ancient Christianity Conferences sponsored by the Brotherhood of St. Moses the Black and is in demand locally as a speaker on African American history, and nationally on issues in African American spirituality and Orthodox Christian mission.  He has appeared  on “Good Morning America” and on the National Geographic channel.

Fr. Moses’ parish, Theotokos “Unexpected Joy” Orthodox Church, stands close to an enormous sycamore tree--the same tree that Fr. Moses’ ancestors used as a shelter for church picnics and other celebrations for over a century.

Brotherhood of St. Moses the Black 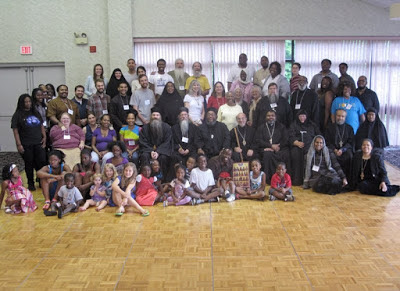 In 1993 Fr. Moses was living in Saint Louis, Missouri and serving as the pastor to Christ the Good Shepherd Eastern Orthodox Church. It came to his attention that large numbers of Ethiopian and Eritrean immigrants who, in seeking asylum from their war torn nations, were relocated to St. Louis from the East African refugee camp they had been forced into. While the move to the United States was necessary for the survival of these peoples, they were often unfortunately relocated into dangerous neighborhoods with violent issues of their own.

Fr. Moses noticed that they, like many other recent immigrant groups, lacked an established cultural community that they could rely on for help with the practical needs of adjusting to life in the United States and the spiritual needs that could only be fulfilled in a supportive environment. The Berrys, with the support of the church congregation, made every effort they could to help these immigrant become comfortable in their new lives. They set up a kind of free store in the church basement. Later, with the help of community leaders, Fr. Moses established the area’s first Ethiopian and Eritrean cultural center. 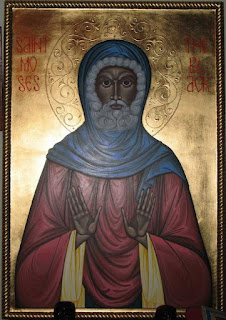 The first ad hoc meeting of the Brotherhood of Saint Moses the Black, with 20 or so community members, was held in the Berry’s living room. The organization was established with the broad purpose of developing unity and brotherhood in the Ethiopian and Eritrean communities, because even though violence and forced migration had pushed these groups together, they had their own individual histories of war and aggression with one another. Members of the organization began regularly attending church services at Christ the Good Shepherd and Fr. Moses began to become known as the American spiritual father of this growing immigrant community.

As the Brotherhood grew, its outreach extended to diverse communities of African descent in the United States, but its mission of developing unity and brotherhood remains the same.

The Unexpected Joy of Forgiveness 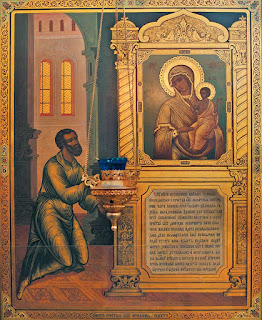 Our church is dedicated to the icon of the Theotokos (Mother of God), "Unexpected Joy." It is our tradition to share this story with the all the members of the parish, adults and children, and with visitors as well. This beautiful and powerful account shows the greatness of prayer and repentance, and the love of the Mother of God.

The original story of the icon was recorded by St. Demetrius of Rostov. In the icon, you see a man kneeling before an image of the Theotokos and her Son. Beneath the icon is written the beginning lines of the story.

The man, a great sinner, prayed each day before the icon of the Theotokos. Once, before going out to sin, he saw that Mary was standing before him, holding her Son in her arms. On His feet and hands were fresh wounds, and blood poured from the wound in his side.

The sinner asked in fear, "Who has done this?" The Mother of God replied, "Every time you and others deliberately sin, you crucify my Son." The sinner wept, and asked God's forgiveness. The Theotokos said that though the man prayed before her every day, he still offended and hurt her by his sins. "Oh no," the sinner cried. "May my wrongs not outweigh your great kindness and mercy! Please forgive me, and pray to your Son on my behalf!"

Seeing that the man was truly repenting, the Mother of God asked her Son to forgive him. For the sake of His Mother, the Lord granted forgiveness to the repentant sinner, and the man lived a pious Christian life for the rest of his days.

Please visit here and watch videos with sermons of Fr. Moses in the holy church:

Archpriest Moses Berry “And Who Is My Neighbor?”

Black Voices in the Orthodox Church

About Orthodox Church in the West World...