Solutions to end racism already given; must act on it!


"...teach us to love one another, even if love is not initially returned."
Sts. Cosmas & Damian Bookstore, Anniston, Ala. 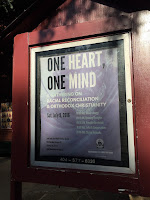 Repentance, forgiveness, and education on the contributions blacks have made to Christianity are major tools to be used to end racism and reach racial reconciliation, according to religious leaders at a conference held in Atlanta Saturday on Cherokee Avenue. 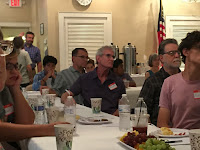 Convening at St. John the Wonderworker Orthodox Church, the "One Heart, One Mind" event was sponsored by the Brotherhood of Saint Moses the Black and included celebration of the divine liturgy followed by a free blueberry pancake breakfast with all the trimmings. About 40 people attended.

The parish priest, Fr. Tom Alessandroni, initiated the proceedings by recounting what Billy Graham said when he retired from the ministry 15 years ago. Fr. Tom said Graham was concerned in his heart that racism was the number one problem facing Christians in America - that there was still no peace and reconciliation among the races. At the time, reconciliation was not a polarizing issue which led to continuing programs addressing the problem, Fr. Tom said.
"People who have nothing more to depend on, who are impoverished, downtrodden, etc, cling to God more," he said, and history is a testament of the spirituality of blacks even though their ministry is often unpublished.
"Christians were living in Africa long before Mohammad was born," he said. "Suffering made slaves Christian martyrs who were triumphant and victorious over their despair," he said, and he encouraged attendees to read the book Slave Religion: The Invisible Institution in the Antebellum South by Dr. Albert Raboteau.

Subdeacon Basil Moses, who formerly worked for the Department of Corrections, said, "I'm at the right place with God," when describing his position in the orthodox church. "I am serving and have found the ultimate spiritual solution," he said.
Fr. Deacon Turbo Qualls, a former rock band member who has been to Iraq and has six children, facilitates and manifests reconciliation services at his parish, St. Mary of Egypt Orthodox Christian Church in Kansas City, Mo. Fr. Turbo said when they baptize people at his church, they sing an old negro spiritual, "Wade in the Water."
Wearing tattoos under his robe, Fr. Turbo said our society suffers from hyper-segregation which can be overcome. He recounted being jumped by neo-nazis and discovering years later that his roommate had been one of the racists who had attacked him. "We must have courage in the midst of adversity and allow ourselves to forgive others," he said of those who truly desire to reconcile with neighbors.
"We must be Christ's disciples," he said, and must "unpack" messages given in the bible.
"God knows," he said of the hurdles we face in society. "He is not ignorant to these things...but we must pray without ceasing." Fr. Turbo recounted family racism Moses and his Cushite wife, Ziporrah, faced early in biblical history. "Don't speak against my prophet," was the answer given.  "We are called to be more than conquerors," he said.
"The cowardly will not inherit the Kingdom of Heaven," he reminded attendees, and he encouraged them to dig deep into contemporary elder writings and understand how they overcame despair.
Recognizing your own sins is the first step involved in healing the spirit, said Fr. Jerome Sanderson, orthodox priest and pastor of St. John the Barefoot Parish in Nashville, Indiana. Fr. Jerome is also a skilled iconographer who painted the Saints of Africa. He began his artistic career carving carrots.
"We must stop the blame game," Fr. Jerome stated which was recorded in one of the first biblical stories. "Adam blamed Eve for giving him the apple, and Eve blamed the serpent...We must reconcile with God first," he said and remember that Lucifer is behind many efforts to divide and conquer us. "Racial turmoil has been instigated by Satan," he said.

Fr. Jerome said we must forgive our enemies and our friends. "A selfish man isolates himself," he said. We must be about forgiveness, prayer, taking the scriptures seriously, obedience to God, self-knowledge, confession, and knowledge of barriers to win the war against racism and truly reconcile with others.
The full video of the conference will be posted on the church's website. (http://www.saintjohnwonderworker.org/)
Q&A
Q. Tomi Johnson: Even Jesus got angry. I don't see the outrage from the church. MLK was outraged about what was happening. It's like we're being lulled to sleep and being told just to pray and believe in God to save us. What weapons can we use, since we can't use robot bombs and long rifles, in this technological age to fight racism? You're saying all we need to do is pray and believe in God?

A. Deacon Turbo: You have to understand what praying and believing in God really is. It says in James that even the devil will tremble... When you see someone who has passed away come back again, when you see that the saints are real, that with the promise of God, that there is life in Him after the blood has passed... that's a powerful weapon. It takes away all the fears of this life. You then say, you know what, you can tear my body, take my home, this and that... the outrage is there but it's not outrage like the world has, where it's the gnashing of the teeth and the things that look like hell.
Outrage comes when people like you and me are taking part in what you have been given - we can only deal with love. But here's the thing: people really haven't been taught what love is. They have been taught how to feel sentiment. It's not about sentiment.

I choose everyday to love my wife. It's not an emotion. It's a choice. It's an act of my will. Something I do with my mind, my body, and my heart. That's love. That's what the saints modeled for us. That's what Christ modeled for us. It is the complete opposite of hate.

The other weapon that we have in regard to the technological aspect of it, remember Jesus was a carpenter, and people forget that. My Lord knew how to make some stuff in this world...I don't demonize tools. If you can use that to disseminate love, then do it. 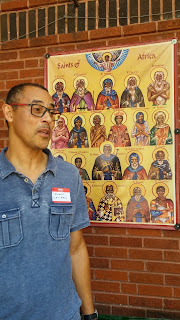 Q. Kurk Johnson: Explain the importance of icons and orthodoxy.
A. Fr. Jerome: In the Old Testament, the Ark of the Covenant was an icon. It was created by man, right, but it was used by the church. It was a window; it's how God's presence would come.
Remember the serpent in the wilderness, totally bronze, the bronze serpent? That was an icon. God told them to craft a bronze serpent, just like somebody painted an icon, but when they looked at it, that's all the instruction they had, when they looked at it, they were healed. What happened when they were healed? Grace moved through the image and healed people. So you see two examples when God demanded that they be made.
What's the difference in that and painting a picture icon?  Yes, we sometimes kiss those icons out of reverence, but there's a big difference. We don't worship a board. There's a big difference between worship and honoring, like kissing your Uncle Bill, you know? That's not worship, is it?
Everyone has icons. You can consider your TV as an icon.  You don't have a problem with that, do you?

A. Tomi Johnson: But I don't kiss the TV.
A. Fr. Jerome: But you give it the time,  don't you?
A. Tomi Johnson: You're right about that!
A. Fr. Jerome: Your TV is more of an idol than all those boards you see in church. It's something that captivates you. A true icon is a window from heaven.
More info. on St. Moses the Black: Wisdom of Father Jerome: From Darkness to Light
See also
The Heresy of Racism
Fr. Moses Berry, a descendant of African slaves, Orthodox priest and teacher in USA
Mother Maria from Uganda
Brotherhood of St. Moses the Black
How “White” is the Orthodox Church?
Ecumenical Patriarch Opposes American Slavery in 1862
Ferguson, MO vs. Malcolm X: Are We Chasing Our Tails? - It is time for us all to come home...
Greek Orthodox Archbishop Iakovos of USA, Martin Luther King Jr. & Reverend James Reeb
The holy anarchists... in the Egyptian Desert
Moses the Ethiopian, the Black Saint & Teacher (& other Ethiopian saints in the Orthodox Church)
Hymn to the African saints
African-Americans (tag)

SONGS OF FREEDOM: The Rastafari Road to Orthodoxy
Miley Cyrus, or: why Orthodox Mission in the West is an urgent need...

The ancient Christian Church - About Orthodox Church in the West World...