Constantine Oprisan (1958), the Philosopher and Martyr

The following is an excerpt from a lengthy interview with Fr. George Calciu, conducted in California on November 6, 1996. The complete interview is contained in the new book by Fr. George, "Christ is Calling You"! 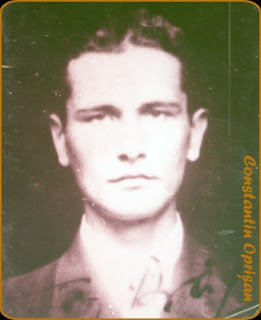 
I was very fortunate because I was among the sixteen people that the Securitate took to Jilava prison, where my [spiritual] healing began (*). In Jilava they built a special cell in a half-cylindrical shape. It was like a cylinder cut in two. We were underground; Jilava is built underground. Above the cell were seven meters of earth. You cannot see Jilava-the whole prison is underground. In this cylinder they built four cells with no windows, only a door.
We had an electric bulb, day and night. They put four of us in each cell. In each cell there would be either a very sick man or a mad man. In my cell, I had a man -Constantine Oprisan- whose lungs were completely emaciated by tuberculosis. Twice a day he had to cough up fluid from his lungs. We would help him by giving him a hat or something, and he would cough and bring up all the discharge from his lungs-blood and everything. It was horrible to see him. On the first day I entered this cell, with me were Constantine Oprisan, my friend who saved me from suicide, and another student younger than us. Constantine began to cough up the fluid in his lungs. I was leaning against the door - surprised because I had never seen anything like that. The man was suffocating. Perhaps a whole liter of phlegm and blood came up, and my stomach became upset. I was ready to vomit. Constantine Oprisan noticed this and said to me, "Forgive me." I was so ashamed! Since I was a student in medicine, I decided then to take care of him.

So I decided to take care of him and told the others that I would take care of Constantine Oprisan. He was not able to move, and I did everything for him. I put him on the bucket to urinate. I washed his body. I fed him. We had a bowl for food. I took this bowl and put it in front of his mouth.

He was like a saint. It was the first time that I was in contact with such a man.

Can you tell us more about him? How he taught and strengthened you?

He did not talk much. He talked to us everyday for about one or two hours because he was not able to talk very much. But every word which came out of his month was a holy word-only about Christ, only about love, only about forgiveness. He said his prayers, and [what a deep impact it had on us] hearing him say those prayers, knowing how much he was suffering. It was not so easy. Out of his gentleness of soul -he wanted to protect us- not to cough too much to spread the germs in the atmosphere. He was like a saint in the cell with its. We felt the presence of the Holy Spirit around him; we felt it. Even during his last days when he was no longer able to talk, he never lost his kindness toward us. We could read in his eyes the spiritual light and the love. It was like a flood of love in his face.

Did he tell you stories about when he was head of "The Brotherhood of the Cross"?

Yes, he did. He told us about how he worked with the youth. I am sure he loved the youth and that he was loved by them. He was completely dedicated to man. He was a very clever man -amazingly clever. He was so kind with us. He did not talk much about himself. He talked about faith, about love, about prayer. He was praying all the time. It was not so easy to be in the cell all the time with the same people, you know. When there arose some conflict between us, he prayed. And his prayer was very effective. We were ashamed, just because he was praying, and we knew it. He was not praying in a loud voice, but his face was completely transformed. We understood that he was praying for us and we stopped [arguing].

He was in [such a terrible physical] condition because he had been tortured in Pitesti for three years. They had beaten him on his chest, on his back and had destroyed his lungs. But he prayed the whole day. He never said anything bad against his torturer, and he spoke to us about Jesus Christ. All the while, we did not realize how important Constantine Oprisan was for us. He was the justification of our life in this cell. Over the course of a year, he became weaker and weaker. We felt that he had finished his time here and would die.

Once a week we were obliged to shave. I would watch Constantine Oprisan, and my friends would shave. Afterwards, I began to shave and one of the others would watch Constantine Oprisan, because we watched him day and night. When anything happened, they would tell me to go to Constantine Oprisan, because I had told them that I should be the only one to take care of him, since I had hurt him that first day. I was sure that I had hurt him, and I felt very, very guilty. While I was shaving, Marcel, the student who was younger than us, saw that Constantine was ready to die. He said, "Go and see Constantine Oprisan; he is dying." I looked at him. His face was completely emaciated. His eyes were open, but I saw that over his eyes there seemed to be a curtain of mist. His eyes turned inside himself. I was so scared, so afraid. I felt that he would die and I would be alone in his cell.
I put my hand on his and said, "Constantine, don't die; don't die! Come back; come back!" I cried with a great voice! Immediately he came back. His eyes became clear. He looked at me. I was right in front of his eyes, you know, bent over him. I don't know what happened in his soul, but I saw an immense terror in his face. His eyes were full of terror and he started to cry. I had the feeling that he had been ready to enter the spiritual world, and I had asked him to come back to the cell. This was a great terror, and so he started to cry. Tears were flowing out of his eyes. His face became the face of a child, a newborn child. He was crying like a newborn child coming out of the womb of his mother. Constantine Oprisan cried because I forced him to come back. In a couple of minutes he died.


How long were you with him in that cell?

After he died, everyone of us felt that something in us had died. We understood that, sick as he was and in our care like a child, he had been the pillar of our life in the cell. Then we were alone without Constantine Oprisan.

We took a towel and washed his body to prepare it properly to be buried in the earth. Then we knocked at the door and told the guards that Constantine Oprisan had died. They came after three hours. We had never left that cell before - that cell which had neither light nor windows. The water, was seeping into the walls; the straw mattresses were putrid under our bodies. So, after two hours, for the first time, the guard commanded me and my friend to take the body of Constantine Oprisan and go outside.

Outside it was so beautiful. Flowers and trees and blue sky. As long as we were in the cell, we forgot about the beautiful world. When we went out, we saw that the world had not changed. This vegetation, these flowers-hurt us. It was like an insult to us, because we were suffering, dying... but the universe did not care about us! The sun was going down and there was a golden light. Everybody was shining like gold. We put Constantine Oprisan on the ground. He was completely naked because we had to give his prison clothes back. His body was completely emaciated. We could not believe that he was a human being. He was completely emaciated; only bones, only bones. And I think that the bile at the moment of death must have entered the bloodstream, because he was completely yellow. My friend took a flower and put it on his chest -a blue flower. The guard started to cry out to us and forced us to go back into the cell. Before we went into the cell, we turned around and looked at Constantine Oprisan -his yellow body and this blue flower. This is the image that I have kept in my memory -the body of Constantine Oprisan completely emaciated and the blue flower on his chest. He was nothing but bones and skin -no muscle. Nothing else... his body lying on the ground with a blue flower.

Afterwards, it was very difficult. I may have sinned because Constantine Oprisan, before he died, said, "I will die, but after death, I will pray to God for you. All my prayers will be for you, because I do not want you to die to this cell." And I am sure he prayed for us, because all three of us succeeded in leaving this prison to go to Aiud [Prison]. I am sure that Constantine Oprisan was praying to God for us. The sin I committed was that all the time I was thinking and invoking the soul of Constantine Oprisan to come and give us light. He never came, though for months I asked him to come and give us light. I think this was a sin I committed, for perhaps it gave him some unrest. I am sure he was very grateful to me that I took care of him. I am sure he loved me very much. He loved everybody. But I think for me he had a special love because I had a special love for him.

Was he older than you?

Yes, he was about six or seven years older. And I never had a repulsion for him after that first time. I took care of him with love and respect. He was like a child in my hands. I had to put him on the toilet, to wash him -to do everything for him. I was thinking that for this love through which we were connected, he had to come to me to give us the light of God...

When I took care of Constantine Oprisan in the cell, I was very happy. I way very happy because I felt his spirituality penetrating my soul. I learned from him to be good, to forgive, not to curse your torturer, not to consider anything of this world to be a treasure for you. In fact, he was living on another level. Only his body was with us - and his love. Can you imagine? We were in a cell without windows, without air, humid, filthy - yet we had moments of happiness that we never reached in freedom. I cannot explain it.

______________
(*) This was during Fr. George's first imprisonment (1948-1965), after he underwent the horrible "reeducation" experiment in Pitesti prison, which attempted to dismantle the human personality and replace with the communist "new man."


Click here: VALERIU GAFENCU - The Saint of the Prisons and Prisoners
fr. George Calciu: The anti-Human
New Martyrs of Optina Pustyn (on Easter night in 1993)