"God created woman equal with man, not inferior... My Christian, you must love your wife as your companion, not consider her as your slave, for she is a creature of God, just as you are. God was crucified for her as much as for you. You call God Father, she calls Him Father, too. Both of you have the same Faith, the same Baptism, the same Book of the Gospels, the same Holy Communion, the same Paradise to enjoy. God does not regard her as inferior to you. "
FULL OF GRACE
ΓΙΑ ΤΟΝ ΑΓΙΟ ΕΛΛΗΝΙΚΑ:
Η ΠΡΟΣΦΟΡΑ ΤΟΥ ΠΑΤΡΟ-ΚΟΣΜΑ ΤΟΥ ΑΙΤΩΛΟΥ
ΘΑΥΜΑΤΑ ΤΟΥ ΑΓΙΟΥ ΣΕ ΜΟΥΣΟΥΛΜΑΝΟΥΣ (από τη μέση του post)
Ο ΑΓΙΟΣ ΚΟΣΜΑΣ ΚΑΙ ΟΙ ΓΥΝΑΙΚΕΣ 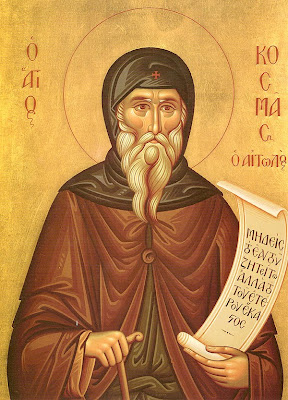 St. Kosmas Aitolos, the New Hieromartyr and Equal-to-the-Apostles - Commemorated on August 24 (taken from here)
The New Hieromartyr Cosmas, Equal of the Apostles, in the world Constas, was a native of Aitolia. He studied at first under the guidance of the archdeacon Ananias Dervisanos, and afterwards continued his education on Mount Athos, at the Vatopedi school renowned for teachers such as Nicholas Tzartzoulios (from Metsovo) and Eugenius Voulgaris (afterwards in the years 1775-1779 the archbishop of Ekaterinoslav and the Chersonessus).

Remaining on Athos at the Philotheou monastery to devote himself to spiritual labors, he was tonsured a monk with the name Cosmas, and later was ordained hieromonk. The desire to benefit his fellow Christians, to guide them upon the way of salvation and strengthen their faith, impelled St Cosmas to seek the blessing of his spiritual fathers and go to Constantinople. There he mastered the art of rhetoric and, having received a written permit of Patriarch Seraphim II (and later from his successor Sophronius) to preach the Holy Gospel.

So the saint began to proclaim the Gospel at first in the churches of Constantinople and the surrounding villages, then in the Danube regions, in Thessalonica, in Verroia, in Macedonia, Chimaera, Akarnania, Aitolia, on the islands of Saint Maura, Kephalonia and other places. 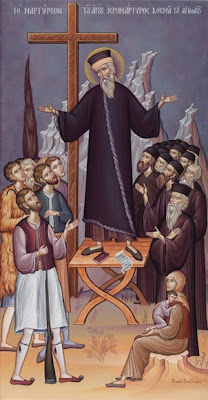 Icon of St. Kosmas preaching to the people (taken from here)

His preaching, filled with the grace of the Holy Spirit, was simple, calm, and gentle. It brought Christians great spiritual benefit. The Lord Himself assisted him and confirmed his words with signs and miracles, just as He had confirmed the preaching of the Apostles.

Preaching in the remote areas of Albania, where Christian piety had almost disappeared among the rough and coarse people entrenched in sin, St Cosmas led them to sincere repentance and improvement with the Word of God. 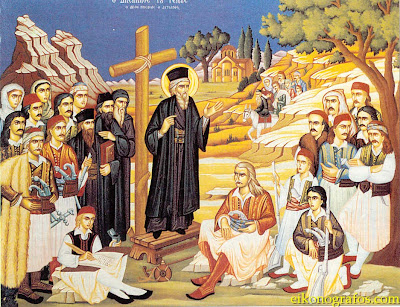 Another icon of St. Kosmas preaching to the people (Icon courtesy of here used with permission)
Under his guidance, church schools were opened in the towns and villages. The rich offered their money for the betterment of the churches, for the purchase of Holy Books (which the saint distributed to the literate), veils (which he gave women, admonishing them to come to church with covered heads),for prayer ropes and crosses (which he distributed to the common folk), and for baptismal fonts so that children could be baptized in the proper manner.

Since the churches could not accommodate everyone wanting to hear the wise preacher, St Cosmas with forty or fifty priests served the Vigil in the fields, and in city squares, where thousands of people prayed for the living and for the dead, and were edified by his preaching. Everywhere that St Cosmas halted and preached, the grateful listeners set up a large wooden cross, which remained thereafter in memory of this. 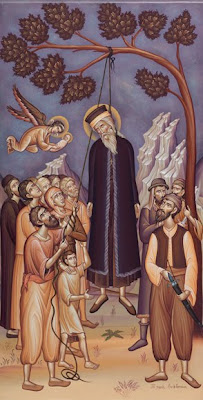 Icon of St. Kosmas being martyred by the Turks (taken from here)

The apostolic service of St Cosmas was brought to a close by his martyric death in the year 1779. At 65 years of age, he was seized by the Turks and strangled. His body was thrown into a river, and after three days, was found by the priest Mark and buried near the village of Kolikontasi at the monastery of the Entrance into the Temple of the Most Holy Theotokos. Afterwards, part of his relics were transferred to various places as a blessing. 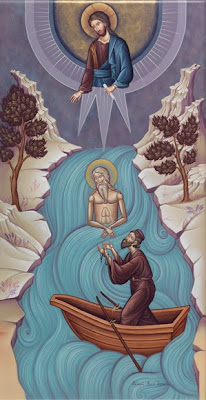 Icon depicting the finding of the sacred body of St. Kosmas (taken from here)

He was glorified by the Ecumenical Patriarchate in 1961.
(taken from here) 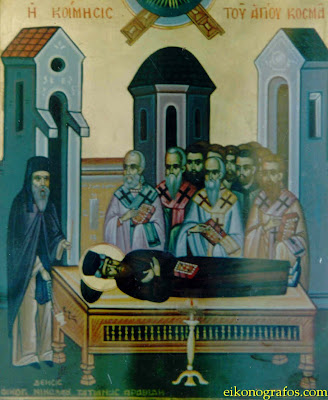 Icon depicting the dormition of St. Kosmas Aitolos (Icon courtesy of  here used with permission)
"It is interesting to note that the initiative for the first church to be built in memory of Father Kosmas was taken by the Moslem ruler of Albania, Ali Pasha, who held Father Kosmas in high esteem not only because he believed Kosmas to be a holy man but also because Kosmas had earlier predicted great success for him [Note: see the first prophecy of St. Kosmas below]. In 1810 Ali Pasha became master of the city of Berat and its environs. Within four years he succeeded in raising the money required to build the first church in honor of St. Kosmas. Moreover, he personally contributed not only toward the building of the church but paid to have a silver reliquary made in which Kosmas' skull was placed and saw to it that the Saint's service (akolouthia) was composed. It was later printed in Venice by the Epirot printer Nicholas Glykys."
(taken from here) 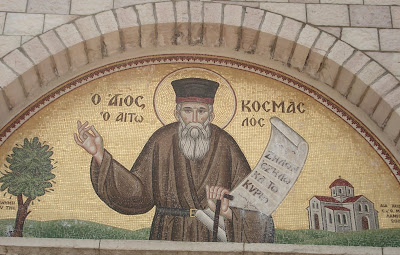 St. Kosmas Aitolos
Selected Prophecies of St. Kosmas Aitolos
(taken from here; see the link for many more prophecies of this great saint)
"You will become a great man, you will conquer all of Albania, you will subjugate Preveza, Parga, Souli, Delvino, Gardiki, and the very stronghold of Kurt Pasha. You will leave a great name in the world. Also, you will go to Constantinople,...but with a read beard. This is the will of Divine Providence. Remember, however, throughout your whole reign, to love and defend the Christians, if you want your successors to retain their power."
(This was said at Tepeleni, in present day Albania, to Ali Pasha, and found amazing fulfillment after some thirty years. He became the sole, powerful ruler of Epiros. In saying the Ali Pasha would go to Constantinople but with a "red beard", the Saint meant that Ali Pasha would be beheaded and his head with bloody beard would be sent to that city. This, too, found fulfillment.)
"Things will come out of the schools that your mind does not even imagine."

"You will see in the field a carriage without horses running faster than a rabbit."

"A time will come when people will speak from one distant place to another, as though they were in adjoining rooms--for example, from Constantinople to Russia."

"You will see men flying in the sky like starlings, and throwing fire on the earth. Those who will live then will run to graves and will cry out: "Come out you who are dead so that we the living may enter."
(These five successive prophecies of St. Kosmas are in books that were written about a century before the related inventions were made. Hence, they arouse admiration and manifestly testify to the Saint's gift of prophecy. ) 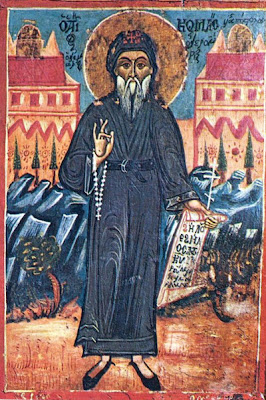 St. Kosmas Aitolos (from here)
"The Turks will leave, but they shall return and will come as far as Hexamilia. In the end, they shall be driven away to Kokkina Milia. Of the Turks, one third will be killed, another third will be baptized, and the remaining third will go to Kokkina Milia."
(Kokkina Milia was a region which the imagination of the enslaved Greeks placed in the depths of Asia Minor and beyond. It is there that they hoped to push back their oppressors, i.e., where they originally came from.)
"In the City (Constantinople) so much blood will be spilled that a three-year old calf will swim in it."
"After the war, a man will have to run half an hour to find another human being to join him in fellowship."
(The situation prophesied here fits with that anticipated today in the case of a nuclear war.) 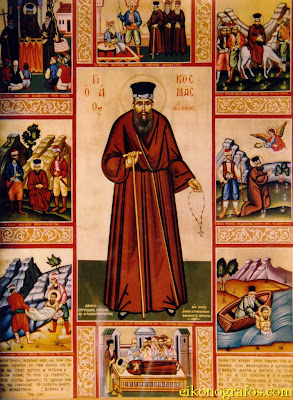 "If we want to fare well in this life and to go to Paradise, and to call our God love and father, we must have two loves: the love for God and the love for our neighbor. It is natural for us to have these two loves, and contrary to nature not have them. Just as a swallow needs two wings in order to fly in the air, so we need these two loves, because without them we cannot be saved."

"If you wish to be saved, seek no other thing here in this world as much as love."

"The Martyrs won Paradise through their blood; the Ascetics, through their ascetic life. Now you, my brethren, who have children, how will you win Paradise? By means of hospitality, by giving to your brothers who are poor, blind, or lame."

"If you want cure your soul, you need four things. The first is to forgive your enemies. The second is to confess thoroughly. The third is to blame yourself. The fourth is to resolve to sin no more. If we wish to be saved, we must always blame ourselves and not attribute our wrong acts to others. And God, Who is most compassionate, will forgive us."

"God created woman equal with man, not inferior... My Christian, you must love your wife as your companion, not consider her as your slave, for she is a creature of God, just as you are. God was crucified for her as much as for you. You call God Father, she calls Him Father, too. Both of you have the same Faith, the same Baptism, the same Book of the Gospels, the same Holy Communion, the same Paradise to enjoy. God does not regard her as inferior to you."

"This prayer should never be absent from you: Lord Jesus Christ, Son and Logos of the living God, through the Theotokos and all the Saints, have mercy upon me, Thy sinful and unworthy servant." (This is the actual Jesus Prayer: "O LORD JESUS CHRIST, SON OF GOD, HAVE MERCY UPON ME, A SINNER.") Always say this prayer both with your mouth and with your mind, day and night, wherever you may be, whether eating, walking, working, or sitting. Always meditate on it, as it benefits you a great deal., frees you here from every evil, delivers you there from eternal Hell, and renders you worthy of going to Paradise, our heavenly country." 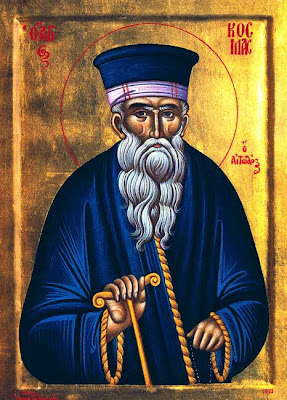 Icon of St. Kosmas Aitolos the Hieromartyr (taken from here)
APOLYTIKION IN THE THIRD TONE
By teaching the Divine Faith, thou hast richly adorned the Church and become a zealous emulator of the Apostles; for having been lifted up by the wings of divine love, that hast spread far and wide the message of the Gospel. O glorious Cosmas, entreat God that He grants us His great mercy.
KONTAKION
Having led an irreproachable life on Athos, like Moses thou hast been deemed worthy of God's manifestation; wherefore truly thou dost gladden the Church exceedingly by thy deeds and thy God-inspired words, O Father Cosmas, having contended for which, thou hast been adorned with a double crown.
MEGALYNARION
Rejoice thou emulator of the Apostles, teacher and luminary of the Church; rejoice thou divine cultivator of piety, associate of Martyrs and peer of Angels. 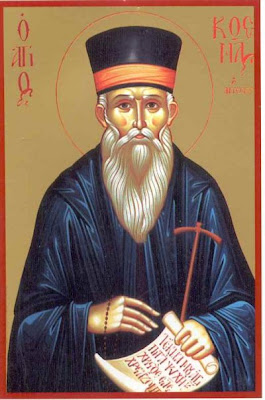 St. Kosmas Aitolos
Through the prayers of our Holy Fathers, Lord Jesus Christ our God, have mercy on us and save us! Amen!
Αναρτήθηκε από ΝΕΚΡΟΣ ΓΙΑ ΤΟΝ ΚΟΣΜΟ στις 12:07 μ.μ.