Lover of Truth: St John, The Wonderworker of San Francisco 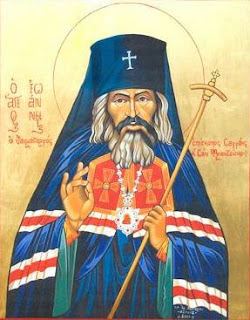 In 2007, when I was fifteen years old and had lost my father, my prayers each night hid a certain complaint, because God had taken my father so early, and even though I asked to see him at least in a dream, this desire of mine was not fulfilled.

God’s answer to my complaint was not long in coming; it came by way of a dream. In my dream, I was in a strange Church and was waitting in a line with other pilgrims. In front of me were children of various nationalities. As I waited at the end of this line, some people from the upper gallery motioned for me to go forward, and at these instructions the children obediently made way for me.

I found myself in front of an Icon depicting a Saint that I had never seen before. He was elderly and had a grey beard. As I gazed upon the Icon, the Saint stepped out of it like an apparition and told me to go to the right. Heading in the direction he had indicated to me, I saw a reliquary, out of which arose the same elderly man I had seen in the Icon. This time, however, he was not an apparition, painted in the colours used by Iconographers, but was flesh and blood.

I approached him, and we both sat down on the reliquary. He did not frighten me; I felt as if I were sitting with a friend on a bench and not with a Saint on a reliquary. He looked in my eyes with love and tenderness. His eyes emitted love and effection, and beautified his aged and bent body. Embracing me paternally, he spoke to me in a different language – not Greek or other languages that people speak. It was as if our souls were communicating. He told me that thenceforth he would be my father. His embrace filled my soul with calm and his fragrance made the dream real.

I woke up thinking about him, and with many questions as to who the elderly man was. Alongside the questions, however, I also had an answer to my question: “Do I have a father?”. Of course I did; I just did not know his name. I asked for help from my mother, who is a catechist and knows a great deal about Saints and their lives. None of those she mentioned, however, corresponded to the description I gave her. I only knew that he had a gray beard, was elderly, short, and bent, and, in any event, a foreigner, since the Church did not look Greek Orthodox, nor were the other pilgrims Greek, and he had not spoken to me in Greek.

My mother advised me to pray to him to reveal to my who he was. The answer to my prayer did not come through a dream this time, but rather through a birthday gift given to me by my spiritual Father (to whom I had never told the dream). I opened the gift and saw that it was a book. When I opened it, I saw the “strange” Church (“strange” to me, that is, because it was Russian) that I had seen in my dream, the Icon of the Saint, his reliquary, and the man himself! That is how I learned his name: St. John Maximovitch, the protector of orphans. Thus it was that I learned the name of my father – the father of all orphans, the afflicted, the weak, the poor, and the wronged. The Saint never leaves me, but is always near me and often appears in my dreams to give me support, consolation, and advice in difficult moments.

God took my [biological] father, but He also took care to send me an incorrupt one (the incorrupt Relics of the Saint are located in San Francisco), who is also on earth and who reminds us that whoever follows Christ has no reason to fear death.

I feel myself fortunate; but, at the same time, since God permitted such a thing to happen to me, the most sinful one, I have a responsibility to help as many people as possible learn about St. John Maximovitch, so that, just as I have been changed, he might also bring about a change for many other people who are reading these words now and who are searching for a place of refuge and a paternal embrace. The only thing I could do as a fifteen year old was to make a Facebook page called SAINT JOHN MAXIMOVITCH https://www.facebook.com/groups/211026374035/permalink/10151823170044036/, which today numbers more than 3,000 members. In the embrace he offered me,we all fit!