St. Herman's years of solitude on Spruce Island caused no little wonder among those unfamiliar with the mysteries of spiritual life. A man once asked, "Fr, Herman, do you live alone in the forest? Do you never become lonely? .... No, I am not alone ," he replied, "God is there as He is everywhere. His angels are there. Is it possible to be lonely in their company? Is it not better to be in their company than in that of people?" 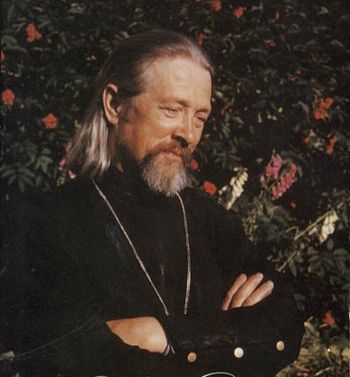 As the forces of evil close ranks upon a spiritually lethargic humanity, the sensitive Christian soul feels increasingly estranged from the world. Not a few grew faint-hearted i in the struggle to resist the pressures of a fallen society--often intensified by isolation for many Orthodox of these latter times But those who suffer from this spiritual affliction must take heart--for what is lacking today in Orthodox community, is more than compensated for by the company of angels and saints who, tho unseen and unnoticed, have in no way abandoned us in our earthly sojourn. We must but learn to turn to them more often, in our prayers and in our thoughts; this will dispel our loneliness and give us strength and courage at a time when the prince of darkness seeks to extend his domain.

Our lesson needs only an illustration, and what better than the life of Archimandrite Gerasim Schmaltz, who was for many years the solitary guardian of St. Herman's Spruce Island Hermitage. He knew well the loneliness that comes not so much from the absence of human companionship, as that more acute loneliness and wariness of soul which proceed from a lack of Spiritual kinship. Although his life lacks external charisma, it gives an example of that inner Strength and independence of spirit which we too must cultivate with the help of God's saints. Most of the material for his life comes from his personal letters to the St. Herman of Alaska Brotherhood, whose formation he inspired twenty years ago.

Born on October 28, 1888; in the province of Tula, Fr. Gerasim was given the name Michael at baptism. His pious parents brought him up on the lives of saints, in strict Orthodox tradition. The goodly seeds thus planted blossomed early in a desire for the monastic life. At the are of 18 he entered theMonastery of St. Tikhon of Kaluga, not far from the famed Optina Hermitage. There he received a sound monastic foundation, although it was not until 1915, when he came to America as a missionary, that he was tonsured. The same year he was ordained hieromonk and in 1916 he was assigned to Alaska. After serving in Sitka and then in Kodiak, he finally settled in the small village of Afognak. 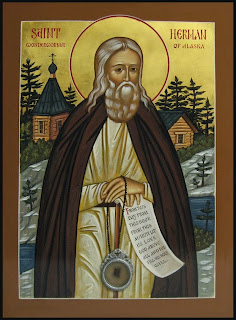 When the Revolution of 1917 broke out in Russia, Fr. Gerasim saw a dream: "The whole sky was dark, fearful. But in the midst of it there was light, and there was Christ crucified. He was dying; His head was bent down and the muscles on His arms trembled from suffering. And I heard a voice: 'Pray, Russia is crucified,'" Like St. Herman, Fr. Gerasim reached out in his heart across the ocean's expanse to his beloved native land; his. tearful entreaties on behalf of his persecuted brethren in Christ served no less to bathe his own soul which was sorely wounded by the political strife within the Church following the schism of Metropolitan Platon in 1926. All the Orthodox clergy in Alaska joined themselves to the latter, with the sole exception of Fr. Gerasim, who chose rather; to bear the heavy cross of his ecclesiastical isolation in continuing to commemorate the Sobor of Bishops Outside Of Russia.

Father Gerasim had served for 18 years as village priest in Afognak, when God answered the desires of his heart to move to Spruce Island. Although slander continued to be heaped upon him by the 'Platonites,' he was greatly consoled in being able to serve the memory of America's Apostle of Orthodoxy. His love for the as yet uncanonized Fr. Herman was amply rewarded by the Saint's firm support anti heavenly intercession. For 25 years he endured poverty and cold, standing before God in prayer as a solitary candle which shone brighter in the heavens than the stars in the sky looking down upon his labors through the tall firs of the dense Spruce Island forests. His converse with the saints secured for eternity a place in their midst, to which he was called on Oct; 12, 1969.

Among the recollections ofhis life which have come down to us. is the following heartwarming essay. May we find in it the inspiration to seek more often, as Fr. Gerasim did, the company of the saints.


"Our Heavenly Friends"
"I was still young when I began to think of monastic life, even though as a child I had not seen any monasteries, In 1905 I timidly drew near my sick father's bedside and said, 'Papa bless me to enter a monastery.' My ailing father asked for an icon and blessed me for the monastic life with an icon of St. Tikhon of Zadonsk.
"The next year a whole group of us made a pilgrimage on foot to the St. Tikhon of Kaluga Monastery. Seeing the magnificent churches, the splendid bell-tower, the beauty of the surrounding countryside, I was overjoyed; it seemed to me that this was God's paradise on earth! I decided to stay and live there and approached Archimandrite Lavrenty with the request that he accept me into the: company of the brothers. He listened, then briefly explained the rigors of monastic life: one must be obedient, humble, rise early for services, and so on. Then he rose 'from his chair and led me to a painting which depicted the mother of St. Tikhon of Zadonsk, leading him as a young boy to town to give him away to a coachman; his older brother is shown standing on his knees in the dusty road, imploring his mother not to do this but to place him instead in a seminary. Pointing to the picture, the Archimandrite told me: 'Here the mother of St. Tikhon wanted to give him over to the care of a coachman, but the older brother overtook her on the road, threw himself down at her feet and said, "Mother, don't take him to be brought up by a coachman; he'll only become a coachman himself. Better take him to a seminary: then he'll turn out to be a priest."

"You should likewise try to lead a God pleasing life,' said the Abbot, and you'll also become a monk.' He was silent for a moment, then said with a smile, 'and perhaps even an archimandrite.' It so happened that for a time I was Archimandrite Lavrenty's cell attendant; in cleaining his room, I often stood admiring that picture which became very dear to me."

After a brief visit to Mt. Athos, Fr. Gerasim was for several years church warden' of the large Holy Protection metochion in the city of Tula. There Vladika Evdokim often spoke of tonsuring him, but his intention was somehow always thwarted. Contrary to everyone's plans and expectations, Fr. Gerasim was tonsured soon after he arrived to America in 1915, by Bishop Alexander in the monastery of St, Tikhon of Zadonsk (established some ten years earlier with the blessing of Archbishop Tikhon--the future Patriarch of All Russia.)

"At that time everything was very poor and humble--from the bishop' s vestments right down to the singing. Bishop Alexander turned to me with a word: '...You have lived in prosperous monasteries and worked in rich cathedrals, but the Lord vouchsafed that you be tonsured in such poverty and humbleness. Never forget that St. Tikhon loved this very poverty--and he is the protector of this monastery, '

"What does this mean if not that St. Tikhon, that great wonder worker, had taken me under his protection from the very day I had decided to devote myself to the monastic life! My father blessed me with an icon of St. Tikhon to become a monk; Archimandrite Lavrenty told me to take St. Tikhon as an example: I was tonsured in St. Tikhon's Monastery. And this is not all. 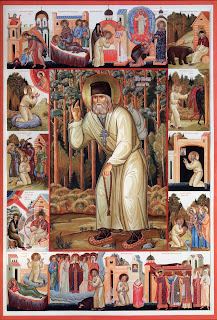 "In 1935 I moved to Spruce Island where the monk-missionary and ascetic, Father Herman, lived and saved his soul; there he reposed in 1836. In July of 1936 I undertook to clean and paint the church. When I had finished, I took home to my cell two icons to clean and repair: one of St. Tikhon of Zadonsk and one of St. Seraphim of Sarov, After cleaning them, I put them in new frames and, sitting down, I gazed upon the holy images of these God-pleasers who were so dear to me. I began to reflect upon my life, and sudlenly it struck me: thirty years ago on this very day, July 17, I had begun my monastic life. Tears involuntarily rolled down my cheeks as I knelt down to kiss the icons. God's beloved!' I cried, 'you are my dear Guests; you came to me, a sinner, on the very day of my setting forth on the monastic path.’

"I had a special veneration and love for these very saints, St. Tikhon of Zadonsk and the holy wonderworker, St. Seraphim of Sarov. Truly has it been said that God's angels and His saints are man's 'heavenly friends...
"Indeed, we are not alone in this earthly life; we have heavenly protectors, intercessors. I myself have experienced this. In these terrible and godless times, even Russian Orthodox people have somehow become ashamed of having icons in their homes, of burning vigil lamps before them. I have seen this for myself when I was in the States-among my own Russian people!
"I recall my childhood days, that golden time of life, when the principle adornment of every home was the holy icons before which burned a vigil lamp. I loved these homes, I loved to look at the array of icons, like whole iconostases, with the flickering lights of the burning lamps in front of them.

"When people rejoiced in decorating their homes with icons, when they kept vigil lamps burning, when they observed the fasts and kept the holy feasts--then they lived quietly, peacefully and piously. Each home, each family, was precisely what St. Paul referred to as a 'house church. But when the Russian Orthodox Christian became infected with modernism, he became ashamed of having icons in the home, of keeping vigil lamps burning--and then a gloomy darkness spread over his soul, causing him of his own accord to join the enemies of God and His beloved Son Jesus Christ and of all that is good and holy. And he began to do that which is unheard of even among wild animals.

"People today do not see the miracles per-formed by the Lord and His saints only because they are spiritually blind; they have risen up against God and His Church here on earth. Mankind's heavenly friends stand far removed from such people. While living very near these saintly guardians, man cannot see them nor sense their presence because of the sinful state of his soul, in which there is no peace, no love."
"Orthodox Christians! Preserve faith in God, strive to acquire love for God and neighbor, and you will clearly see that you have friends in the spiritual world, who pray for you to the Lord. Amen."

The Stories of the Saints of North America
A smile from eternity & a barefoot saint in USA...
Miley Cyrus, or: why Orthodox Mission in the West is an urgent need...
Coffee with Sr. Vassa in Austria
Arriving at the Last True Rebellion
The holy anarchists
LIVE, BEYOND THE LIMITS!
Travelers on the Way to the Light
A Different Light: Youthful Travelers in Contemporary America
Father Seraphim Rose - Living the Orthodox Worldview
Αναρτήθηκε από ΝΕΚΡΟΣ ΓΙΑ ΤΟΝ ΚΟΣΜΟ στις 8:57 π.μ.