Bones of Sts Chrysanthus and Daria (March 19), a Roman couple — killed for being Christian — may have been identified 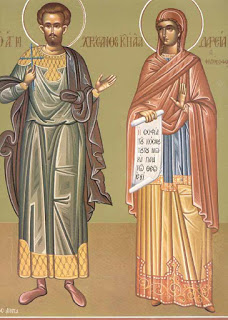 The skeletons of two married, early-Christian saints—said to have been buried alive nearly 2,000 years ago—may have been identified in Italy, scientists announced Thursday.

Analysis of the skeletons—sealed off for centuries in an Italian cathedral until recently—seems to support the legend of Chrysanthus and Daria, who are said to have been persecuted in the city of Rome for being Christians.

According to ancient stories, the Roman Empire killed the celibate Roman husband and wife in the third century A.D., after they had converted many Romans to the fledgling religion.

Though there's no way to identify the skeletons with 100 percent certainty, "all of the evidence we have gathered points toward the relics having belonged to Chrysanthus and Daria," investigation leader Ezio Fulcheri, a paleopathologist at Italy's University of Genoa, said in a statement.

In 2008 workers renovating the cathedral, in the northern Italian town of Reggio Emilia, found more than 300 bones in a sealed crypt beneath the main altar.

The remains were found to form two nearly complete skeletons. The skulls of the bodies turned out to be in a pair of silver-and-gold busts deep in a cathedral vault, into which they'd been transferred nearly 500 years ago, University of Turin anthropologist Allesandra Cinti told National Geographic News via email.

Examining the bones, study leader Fulcheri and his team concluded that the remains belonged to a man and woman who were generally healthy at the time of their deaths.

Based in part on its slender and petite frame, wide pelvis, and pointed chin, one of the skeletons was presumed to have been a female in her mid-20s. The sex was later confirmed by DNA analysis, according to Fulcheri, whose work was partly funded by the National Geographic Society's Expeditions Council. (The Society owns National Geographic News.)

The team suspects this skeleton was Daria, who, according to legend, was a vestal virgin—a high priestess of Rome dedicated to the goddess Vesta—before converting to Christianity.

"The bones show that she probably lived a life with very little physical stress," the University of Turin's Cinti says in a new documentary about the project—Explorer: Mystery of the Murdered Saints—which airs at 10 p.m. ET/PT on Tuesday, April 19, on the National Geographic Channel.

"She had the characteristics of a vestal virgin," Cinti added. "But of course, we can't be certain."

The second skeleton's bones appear nearly adult but aren't fully formed—parts of them were still fusing together at death. This suggests the remains belonged to a 17- or 18-year-old, the researchers say. DNA tests later reveal the individual to be a male.

If the legends—and the team's conclusions—are to be believed, this may be Chrysanthus.

Also, like the Chrysanthus and Daria of legend, the recently unearthed couple appears to have been upper-class. For example, the bones showed no signs of deformities or wear from physical labor.

By analyzing trace elements in the bones, the team also uncovered signs of lead poisoning—a uniquely aristocratic ailment in ancient Rome. The toxic metal was present in the city's plumbing system, which reached only the homes of the wealthy.

The team also carefully picked out a single rib from each skeleton, ground the ribs into a fine powder, and performed a carbon dating test on them.

The test revealed the skeletons date to between A.D. 80 and 340—the martyrs are thought to have been killed around A.D. 283.

In ancient tales Chrysanthus, the son of a rich Roman senator, converts to Christianity as a teenager.

Desperate to prevent Chrysanthus from making what he thinks is a huge mistake, his father arranges to have him married to the vestal virgin Daria.

At Rome's Temple of Vesta, virgins maintained a holy fire that symbolized procreation and which the Romans believed kept their city safe.

"In the ancient thinking, there was this belief that religion and politics were intertwined. So when something went wrong in the political sphere, there was a religious problem somewhere," explained Sarolta Takács, a historian at Sage College in Albany, New York, who wasn't involved in the study.

As their name suggests, the vestal virgins were supposed to remain celibate during their time of service.

According to legend, the plan to distract Chrysanthus from Christianity backfires. He converts Daria to his religion, and the two marry but take a vow of celibacy and devotion to God.

"That people should live together as if they're married but not actually have sex and produce children goes against everything that Roman society stood for," Candida Moss, an expert in early Christian martyrdom at the University of Notre Dame, said in the documentary.

What's worse—in the eyes of the Roman Empire—is that the pair successfully converted many to Christianity.

For their crimes, Chrysanthus and Daria are arrested and tortured.

The typical punishment for a vestal virgin who'd broken her vow of celibacy was death by starvation. The punishment for conversion to Christianity, though, would have been a life of prostitution—the worst possible fate for a priestess of Vesta, Sage College's Takács explained.

The Romans would have believed Daria's conversion to Christianity endangered their entire city, Takács explained. For one thing, there were only six vestal virgins at any one time, so the loss of even one priestess would have been a serious setback for Rome.

"What's important about the vestals is that they were intimately connected with Rome," Takács said.

"When they did everything correct and properly, Rome thrived. And if they made mistakes, then Romans suffered problems."

According to the story, Chrysanthus is sent to prison, while Daria is condemned to prostitution. Both are said to have been saved from their fates by miracles—his prison turns into a garden; she is protected from would-be johns by a lioness.

Despite supposedly divine intervention, Chrysanthus and Daria are eventually sentenced to death, the story goes. According to the most popular version of the legend, the pair is buried alive in Rome.

"No Evidence in Contrast"

It's said that a Christian shrine was erected at Chrysanthus and Daria's burial site. Later their venerated bones were transferred several times before eventually arriving, around the year 1000, in Reggio Emilia, hundreds of miles north of Rome—a story the new analysis appears to corroborate, scientists say.

"I think there is no evidence in contrast of this hypothesis," study leader Fulcheri told National Geographic News.

The University of Turin's Cinti added in the documentary, "These results confirmed two fundamental facts for us.

"They confirmed their antiquity and the fact that they were both from the same time period. We were able to relax, let out a sigh of relief and say okay, maybe it's actually them."