The parable of the prodigal son is a mystagogic parable 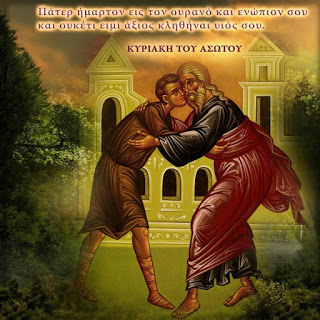 
The parable of the prodigal son is a mystically educational parable. It clearly refers to the sacrament of baptism, of repentance and of the Holy Eucharist. Salvation is on the table of the Church. The Father, the calf, the glory garment, as well as the other elements of glory.  God could not have spoken more clearly. It was not about a moral path towards vindication, but a mystagogic ecclesiastic procedure; it is about the return and the rejoicing.

Saint Simeon tells us how, in the parable of the prodigal son is hidden and foreshadowed the great mystery of Repentance-Confession in its three stages: confession, contrition and satisfaction. Confession is found in the words "Father, I have sinned unto heaven and before you».  In the words “I am not worthy of being called your son” we discern contrition. In the words “Do with me, as one of your wage-earners” is contained satisfaction; that is, the need for a certain spiritual penance that satisfies the crushed human state.

The older son did not covet the celebratory garment, the ring, the sandals and the fatherly embrace. He coveted the fattened calf and complained about the rejoicing and the celebration. The holy Fathers tell us that this stance refers to those of us who receive Holy Communion (=the sacrificial calf) and yet, judge the worth or the unworthiness of others.  Poor, deluded fools!

When the father slaughtered the calf and prepared the banquet, were you not invited to participate in that celebration?  Didn’t the sinner brother also have a right to be at the celebration and the banquet?  Isn’t the Holy Chalice common to all?  Did the father invite him and not you? And anyway, who, my dear fellow, made you a jurist and judge on My affairs? - as the Lord had said.

Whatever I give to him and to you, I give the same to both!  Don’t I have the right to oversee those things that belong to me? Your brother was lost and was found; he was dead and lived again – Shouldn’t we therefore rejoice? He abandoned his past life, and I judged him worthy of rejoicing. Why are you still harboring inside you that foreign Past, which is no concern of yours at all?  I evaluate his Present and act accordingly! Are you perhaps the guardian of my property? Do you perhaps covet my Love, o you tiny-souled, sick person!?!

The first Sunday of the Triodion - the Sunday of the Publican and the Pharisee – among other points was an introduction of ours to the Orthodox ethos, because the Triodion period is an opportunity for us to be re-baptised in the faith of Jesus Christ and in our substantial relationship with Him.   So far, we have seen that the key to the Kingdom is humility, also the immense value of self-deprecation and the absolute dependence on divine mercy. We learned how to emulate the external virtues of the Pharisee but avoiding his haughty bragging, and also how to avoid the publican's life style but being zealous of his deep and saintly repentance.

This Sunday, of the son who returns and father who opens his embrace, has a prominently sacramental character. If the first Sunday pertains to the ethos, this one reveals to us the value of the Mysteries and our need to partake in them, in order to hereafter live as choice and genuine children of God.  Patristic interpretation tells us what is declared by all these acts of love and honor that the merciful father is bestowing on the prodigal son: the embrace signifies the inclusion in the Kingdom and the acceptance of the son’s repentance. The father’s warm welcome is also an expression of unconditional, unique love.

The ring, the sandals and the new garment are the cloak of elation, which signifies the glory and the restoration by the Baptism, while the sacrifice of the fatted calf and the delight at a celebratory banquet clearly denotes the Mystery of the Divine Eucharist and Paschal participation.

And before all the above, there is the return of the son, his open admission, his humiliation in front of the father and the final absolution, which surpasses the absolution and penances and becomes joy and honour; that is, the mystery of repentance and confession - a prerequisite for the return to life, to the actual life. The life in the paternal home, which is the life near God.  Outside that home there is no life; only famine and swine and servitude to a master of prostitutes, prodigals and swineherds, who reigns in the land of hunger and death.

Thus, the period of the Triodion is, above all, a period of liturgical splendour and Eucharistic opportunities. A period that not only has to do with our emotional load and psychological priorities and our ascetic ethos, but with our return to the genuine ecclesiastic way of life. And the ecclesiastic way of life signifies our participation in the sacraments. And our participation in the sacraments signifies a substantiation of man, the return to being, and an existence near God.

That is when the genuine traveler of the Triodion can say that he was lost and then found, dead and lived again; by having received true light and becoming true light, he can proceed without stumbling to the Paschal joy of the Resurrection, which rises at the end of the Triodion’s course.

“Having squandered the paternal gift of wealth,
I, the wretch, was grazing with senseless beasts,
and by longing for their food, I was starving,
not sated by it; but, on returning to the merciful Father,
I cry out with tears: “Accept me as a wage-earner
beseeching Your philanthropy, and save me”
(Chant)

Satan, as the "eldest son" in the parable of the prodigal son

I think the older son of the parable resembles Lucifer, as opposed to the younger son, who is clearly man, Adam.

God is father to both, because He is the creator of both. And of course, given the temporal precedence of his creation, the devil is considered an “elder son” (as a creation within Time).

The older son is portrayed in the parable as already outside the paternal home, just like the devil, who had apostatized and had remained “outside”, prior to the fall of Adam.  He feigns ignorance, and seeks to learn the cause of rejoicing from a servant (an Angel, a priest, a Christian) – obviously to make him a co-partaker of his indignation and his own situation. By envying his co-creation (man), he calumniates him to the Father (“your son squandered your wealth with prostitutes, etc...”).

Furthermore, bedimmed as he was, he managed to overlook his own fall and blindness, accusing his father of thanklessness and ungratefulness, and, presenting himself as a wronged Prometheus, he complained that his Father never provided even a young goat for his friends (demons) to celebrate a banquet together with them (the joy of paradise is hell for the un-communed and unclean), and he holds the Father responsible for his personal self-destruction, for God’s supposed bias and injustice – all because he had attained a perverted sense of justice and a blackened self-government.

His Father reminds him of the glory that he used to have previously, near Him, but also the potential to be like an Archangel (regardless of his persistence in remaining perverted with his self-government) and attempts to put him in Paradise as well, to co-rejoice with his fellow-man (because God invites even Satan to repentance). But the older son refuses, he becomes possessed (enraged), does not enter (“did not wish to enter”) and remains forever away from the rejoicing of the Father (non-communion, “hell”) – whereas the servants of the Father (benevolent Angels) co-rejoice and concelebrate for the return of Adam to the paternal home (There is great joy "in heaven, for even one repented sinner" - Luke 15:7).

Let us also remember how man was invited to replace the tenth angelic order of Lucifer and his angels who had lapsed, as well as the parable of the lost sheep, where the shepherd (God) leaves the nine sheep (the nine orders of Angels) and seeks to find the one lost sheep.  He then finds it, and numbers it among the nine others, who co-rejoice for the return of that sheep.

The Christian, who looks upon the return of a repented brother with a “crooked” eye and a devilish disposition, and regards as unacceptable the pastoral concern of the Church for the misled brother, resembles that evil and perverted Satan himself. By having the illusion of superiority and spiritual self-sufficiency, he considers God the Father responsible for his own wretched situation, obliged to justify him and to also minister to him; and yet, he does not in fact want to be ministered to or helped, but eventually proves himself to be a sinner and a prodigal.

The love and the righteousness of the Father is “hell” for him, and it reveals the misery of his existence – just as limitless sunlight is death to the gloomiest and most abysmal darknesses.

Man and his Fall - Analysis of the Parable of the Prodigal Son
Orthodox Spiritual Legacy: A Guide to the Triodion and Lent, on the Road to Easter
Triodion resource page

Triodion (tag)
The Way - An introduction to the Orthodox Faith
Theosis (deification): The True Purpose of Human Life
Theosis, St. Silouan and Elder Sophrony
LIVE, BEYOND THE LIMITS!
Love the sinner, hate the sin
Deification - The Uncreated Light

Protestants ask: Why be Orthodox?
During the time that Luther and Calvin were formulating the Reformation...
The ancient Christian Church - About Orthodox Church in the West World
Travelers on the way to light
Αναρτήθηκε από ΝΕΚΡΟΣ ΓΙΑ ΤΟΝ ΚΟΣΜΟ στις 10:38 μ.μ.