Saint John Chrysostom, Archbishop of Constantinople, one of the Three Hierarchs [January 30], was born at Antioch in about the year 347 into the family of a military commander. His father, Secundus, died soon after the birth of his son. His mother, Anthusa, widowed at twenty years of age, did not seek to remarry but rather devoted all her efforts to the raising of her son in Christian piety. The youth studied under the finest philosophers and rhetoricians. But, scorning the vain disciplines of pagan knowledge, the future hierarch turned himself to the profound study of Holy Scripture and prayerful contemplation. Saint Meletius, Bishop of Antioch (February 12), loved John like a son, guided him in the Faith, and in the year 367 baptized him.
After three years John was tonsured as a Reader. When Saint Meletius had been sent into exile by the emperor Valens in the year 372, John and Theodore (afterwards Bishop of Mopsuestia) studied under the experienced instructors of ascetic life, the presbyters Flavian and Diodorus of Tarsus. The highly refined Diodorus had particular influence upon the youth. When John’s mother died, he embraced monasticism, which he called the “true philosophy.” Soon John and his friend Basil were being considered as candidates for the episcopal office, and they decided to withdraw into the wilderness to avoid this. While Saint John avoided the episcopal rank out of humility, he secretly assisted in Basil’s consecration.
During this period Saint John wrote his “Six Discourses on the Priesthood,” a great work of Orthodox pastoral theology. The saint spent four years struggling in the wilderness, living the ascetic life under the guidance of an experienced spiritual guide. And here he wrote three books entitled, “Against the Opponents of Those Attracted to the Monastic Life”, and a collection entitled, “A Comparison of the Monk with the Emperor” (also known as “Comparison of Imperial Power, Wealth and Eminence, with the True and Christian Wisdom-Loving Monastic Life”), both works which are marked by a profound reflection of the worthiness of the monastic vocation.
For two years, the saint lived in a cave in complete silence, but was obliged to return to Antioch to recover his health. Saint Meletius, the Bishop of Antioch, ordained him deacon in the year 381. The following years were devoted to work on new theological writings: “Concerning Providence” (“To the Ascetic Stagirios”), “Book Concerning Virginity,” “To a Young Widow” (2 discourses), and the “Book of Saint Babylos, and Against Julian and the Pagans.”
In the year 386 Saint John was ordained presbyter by Bishop Flavian of Antioch. Saint John was a splendid preacher, and his inspired words earned him the name “Golden-Mouthed” (“Chrysostom”). For twelve years the saint preached in church, usually twice a week, but sometimes daily, deeply stirring the hearts of his listeners. 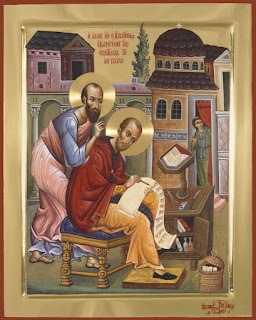 The apostle Paul dictates to St. John Chrysostom the interpretation of his letters. Icon (from here) of the hagiography of the Holy Monastery of Vatopedi.

In his pastoral zeal to provide Christians with a better understanding of Holy Scripture, Saint John employed hermeneutics, an interpretation and analysis of the Word of God (i.e. exegesis). Among his exegetical works are commentaries on entire books of the Holy Scripture (Genesis, the Psalter, the Gospels of Matthew and John, the Epistles of the Apostle Paul), and also many homilies on individual texts of the Holy Bible, but also instructions on the Feastdays, laudations on the Saints, and also apologetic (i.e. defensive) homilies (against Anomoeans, Judaizers and pagans). As a priest, Saint John zealously fulfilled the Lord’s command to care for the needy. Under Saint John, the Antiochian Church provided sustenance each day to as many as 3,000 virgins and widows, not including in this number the shut-ins, wanderers and the sick.

Saint John began his commentary on Genesis at the beginning of Great Lent in 388, preaching thirty-two homilies during the forty day period. During Holy Week he spoke of how Christ was betrayed, and about the Cross. During Bright Week, his pastoral discourse was devoted to the Resurrection. His exegesis of the Book of Genesis was concluded only at the end of October (388).
At Pascha in the following year the saint began his homilies on the Gospel of John, and toward the end of the year 389 he took up the Gospel of Matthew. In the year 391 the Christians of Antioch listened to his commentary on the Epistles of the holy Apostle Paul to the Romans and to the Corinthians. In 393 he explained the Epistles to the Galatians, the Ephesians, Timothy, Titus, and the Psalms. In his homily on the Epistle to the Ephesians, Saint John denounced a schism in Antioch, “I tell you and I witness before you, that to tear asunder the Church means nothing less than to fall into heresy. The Church is the house of the heavenly Father, one Body and one Spirit.” 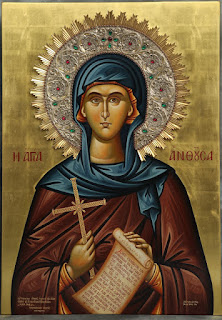 The fame of the holy preacher grew, and in the year 397 with the death of Archbishop Nectarius of Constantinople, successor to Saint Gregory the Theologian, Saint John Chrysostom was summoned from Antioch, and elected to the See of Constantinople. At the capital, the holy archpastor was not able to preach as often as he had at Antioch. Many matters awaited the saint’s attention, and he began with the most important -- the spiritual perfection of the priesthood. He himself was the best example of this. The financial means apportioned for the archbishop were channeled by the saint into the upkeep of several hospices for the sick and two hostels for pilgrims. He fasted strictly and ate very little food, and usually refused invitations to dine because of his delicate stomach.
The saint’s zeal in spreading the Christian Faith extended not only to the inhabitants of Constantinople, but also to Thrace to include Slavs and Goths, and to Asia Minor and the Pontine region. He established a bishop for the Bosphorus Church in the Crimea. Saint John sent off zealous missionaries to Phoenicia, to Persia, and to the Scythians, to convert pagans to Christ. He also wrote letters to Syria to bring back the Marcionites into the Church, and he accomplished this. Preserving the unity of the Church, the saint would not permit a powerful Gothic military commander, who wanted the emperor to reward his bravery in battle, to open an Arian church at Constantinople. The saint exerted much effort in enhancing the splendor of the church services: he compiled a Liturgy, he introduced antiphonal singing for the all-night Vigil, and he wrote several prayers for the rite of anointing the sick with oil.
The saintly hierarch denounced the dissolute morals of people in the capital, especially at the imperial court, irrespective of person. When the empress Eudoxia connived to confiscate the last properties of the widow and children of a disgraced dignitary, the saint rose to their defense. The arrogant empress would not relent, and nursed a grudge against the archpastor. Eudoxia’s hatred of the saint blazed forth anew when malefactors told her that the saint apparently had her in mind during his sermon on vain women. A court was convened composed of hierarchs who had been justly condemned by Chrysostom: Theophilus of Alexandria, Bishop Severian of Gabala, who had been banished from the capital because of improprieties, and others.
This court of judgment declared Saint John deposed, and that he be executed for his insult to the empress. The emperor decided on exile instead of execution. An angry crowd gathered at the church, resolved to defend their pastor. In order to avoid a riot, Saint John submitted to the authorities. That very night there was an earthquake at Constantinople. The terrified Eudoxia urgently requested the emperor to bring the saint back, and promptly sent a letter to the banished pastor, beseeching him to return. Once more, in the capital church, the saint praised the Lord in a short talk, “For All His Ways.”

The slanderers fled to Alexandria. But after only two months a new denunciation provoked the wrath of Eudoxia. In March 404, an unjust council was convened, decreeing the exile of Saint John. Upon his removal from the capital, a fire reduced the church of Hagia Sophia and also the Senate building to ashes. Devastating barbarian incursions soon followed, and Eudoxia died in October 404. Even pagans regarded these events as God’s punishment for the unjust judgment against the saint.
In Armenia, the saint strove all the more to encourage his spiritual children. In numerous letters (245 are preserved) to bishops in Asia, Africa, Europe and particularly to his friends in Constantinople, Saint John consoled the suffering, guiding and giving support to his followers. In the winter of 406 Saint John was confined to his bed with sickness, but his enemies were not to be appeased. From the capital came orders to transfer Saint John to desolate Pityus in Abkhazia on the Black Sea. Worn out by sickness, the saint began his final journey under military escort, traveling for three months in the rain and frost. He never arrived at his place of exile, for his strength failed him at Comana.
At the crypt of Saint Basiliscus (May 22), Saint John was comforted by a vision of the martyr, who said, “Despair not, brother John! Tomorrow we shall be together.” After receiving the Holy Mysteries, the hierarch fell asleep in the Lord on September 14, 407. His last words were, “Glory to God for all things!” 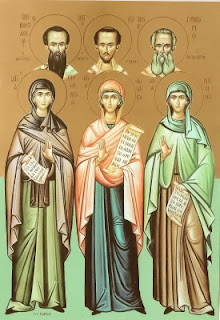 The holy relics of Saint John Chrysostom were solemnly transferred to Constantinople in the year 438. The disciple of Saint John, the venerable Isidore of Pelusium (February 4), wrote: “The house of David is grown strong, and the house of Saul enfeebled. He is victor over the storms of life, and has entered into heavenly repose.”
Although he died on September 14, Saint John’s celebration was transferred to this day because of the Feast of the Elevation of the Holy Cross. Saint John Chrysostom is also celebrated on January 27 and January 30 (Synaxis of the Ecumenical Teachers and Hierarchs Basil the Great, Gregory the Theologian, and John Chrysostom).


The Holy Three Hierarchs along with their mothers,
saints Emmelia, Nonna and Anthousa (icon from here)