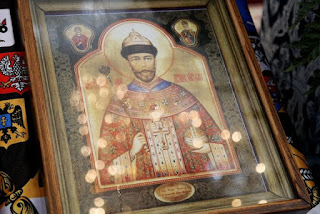 By Fr Job (Gumerov)
The Catalog of Good Deeds - St Elisabeth Convent
There are plenty of testimonies concerning miracles and graceful help through prayers to the Holy Royal Martyrs. By the time the Romanovs Family was canonized in August 2000, there had been lots of accounts about miracles related to them.

Myrrh-Gushing Icon of the Emperor

I would like to share one such miracle in detail. An artist by the name of Pavel Tikhomirov painted an icon of the Emperor Nicholas early in 1997. Later, the icon served as the basis for color lithographies, one of which was owned by Oleg Belchenko, a surgeon from Moscow. He attended a service in the cathedral church of Sretensky Monastery on September 6, 1998 with this icon in a plastic bag. It started emitting fragrance, which was so strong that people were turning their heads to look at him. When he took the icon out of his bag after the service, the scent increased.

The image spent three weeks in the sanctuary, emanating fragrance continually. It started to pour myrrh late in 1999. The icon was placed in the Ascension Church in Gorokhovo Pole, then transferred to St Nicholas the Wonderworker Church in Pyzhy in February 1999, and then to other churches in Moscow. Hundreds of parishioners could witness the pouring myrrh with their own eyes. When this icon was in Holy Trinity Church in Khokhlovsky Pereulok, it healed Alexander Vytiagov, a veteran of the WWII and a retired 87-year-old colonel. He had been blind for fifteen years by that time. He met Father Alexius Uminsky, the rector of that church, and said, “I believe that this icon will heal me.” Father Alexius replied, “Let it be to you according to your faith.” He covered the man’s head with a towel soaked in the myrrh. The colonel woke up the following morning, looked around, and screamed, “I can see!” His family ran to his bed and saw that he was able to see.

The wonderworking icon traveled around many churches and monasteries. It visited more than twenty dioceses before the 2000 Synod of Bishops. The myrrh was seen pouring from that icon on numerous occasions. A number of healings was also recorded.

Here is another example. Archpriest Alexander Ignatov, the rector of the Holy Nativity of Christ Church in Krasnodar, bought an icon of the Royal Family in the icon store of St Daniel Monastery in 2000. A cleaning lady who washed the icons after a Sunday Liturgy in 2002 noticed that the glass became blurred. When they opened the kiot, they saw that the icon of the Holy Royal Martyrs was imprinted on the glass from the inside in slightest detail. Miracles like these are well known to the Orthodox. A similar miracle happened in 1993 in the Monastery in honor of the Entry of the Mother of God into the Temple (Kyiv) with an icon of Look at Humility Mother of God, which had an imprint on glass not made by hands. The image on glass was then put in a separate kiot and is said to work miracles.

The icon of the Holy Royal Martyrs imprinted on glass in Krasnodar was sent to the Commission on Research of Miraculous Phenomena of the Moscow Patriarchate, with the blessing of Metropolitan Isidore of Krasnodar. Forensic experts from the Institute of Forensics of the Federal Security Service of the Russian Federation, Forensic Center of the Ministry of Internal Affairs, and the laboratory of the Institute of General Physics of the Russian Academy of Sciences tested this icon for a year using advanced equipment and modern methods. They confirmed the existence of the image on glass but could not explain its origin. The icon and the image on glass are made of different matter.