Visions Outside the Church

by Monk Gorazd
From this very interestingr site
ΕΛΛΗΝΙΚΑ ΕΔΩ
Click here:
A Comparison: Francis of Assisi and St. Seraphim of Sarov.
Why Orthodoxy is the True Faith?.
Many people have heard that the Mother of God has supposedly appeared to Roman Catholics in various places. They do not know what to think about these events. Some even go so far as to think that since the Mother of God appears to Roman Catholics, it follows that the Roman Catholic Church is a true, grace-filled church, especially since various miracles and healings take place at the locations of the visions. Fatima, in particular, has aroused much interest among Russians living abroad because the apparition allegedly speaks about Russia in strongly anti-communist terms, leading them to overlook the heretical and anti-Orthodox content of the message as a whole. What are we to make of these appearances and the claims made for them? What criterion should we use to guide us in testing the truth of visions outside of the Orthodox Church? Hopefully, what follows will help in understanding such phenomena.
The Holy Fathers, knowing that Satan can transform himself into an angel of light, advise us to be cautious and distrustful of all appearances in the visible world. “If you are silent in a good way, desiring to be with God,” says St. Gregory the Sinaite, “never accept any physical or spiritual appearances, either outside or inside yourself, even if it might be an image of Christ, or an angel, or some Saint, or if light should appear, or imprint itself in the mind...Be attentive, that you may not come to believe something, even if it is something good, and be not captivated by it before consulting those who are experienced and are able to analyze the matter, so that you do not suffer harm...God is not displeased with the person who is attentive to himself, even if he, out of fear of deception, does not accept even that which is from Him, without consulting and testing....” We might add that the Lord God could at all times give full assurance to a person, if He is pleased to do so, concerning the truth of a vision. If such caution is necessary concerning visions WITHIN the Orthodox Church, how much more circumspect should we be in relation to apparitions OUTSIDE the one, true Church! The sole criterion for examining these visions should be their Orthodoxy. If in any respect their Orthodoxy is lacking, then they must be rejected: even if 99% of the message is Orthodox and only 1% deviates from the doctrines laid down by the Church, then the whole must be rejected. God cannot deny Himself or preach untruth even in the smallest degree.
Let us examine three well-known cases which have occurred in our own century. First, we will deal with Fatima, which is of special interest, since the apparition there speaks about Russia and its role in the destiny of mankind. 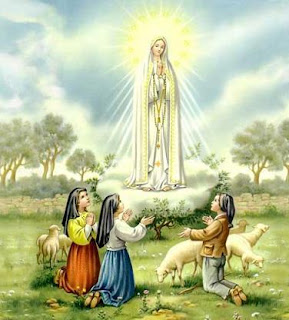 Towards the end of the First World War, at Fatima in Portugal, between May and October, 1917, three shepherd children, two girls and a boy, had a series of visions of someone whom they said was our Lady, the Blessed Virgin.... Throughout the six months of the apparitions, the messages which Lucia was told to make public, at that time or somewhat later, were largely concerned with the need to encourage devotion to the rosary and to our Lady’s immaculate heart, and with the need for mankind to change the direction in which it was moving. Failure to make that change would bring down the wrath of God... (from Studies in Comparative Religion. A Question Concerning the Second Vatican Council, by Verak).
In December, 1940 Sister Lucy (the only one of the three who remained alive and who is now a nun of the Carmelite order) wrote to Pope Pius XII saying, “In 1917 the Most Holy Mother prophesied to us the end of the war which at that darkened the face of Europe; she prophesied another war and said that she would come again. She insisted on the dedication of Russia to her most sacred heart, promising in return to hinder the spread of false teaching from Russia and to convert Russia.” (from News About Fatima, the Greatest Miracle of Our Time, Brussels, 1962 p. 144). It is necessary to remember that Catholics understand “the conversion of Russia” to mean her conversion to Roman Catholicism. Again we read in the journal The Fatima Crusader (issue #17, April-May, 1985): “So it may well be that the conversion of a few Russians to Catholicism now is part of God’s preparations for the conversion of Russia when the Pope and bishops finally obey the command of our Lady of Fatima to consecrate Russia in the manner prescribed by God...The reason why Jesus gave this specific command to the Pope and bishops is because he wants his whole church to recognize the consecration of Russia as a triumph of the immaculate heart of Mary...Sister Lucy records...in a letter dated May 18, 1936: ‘Intimately I have spoken to our Lord about the subject and not long ago, I asked Him why He would not convert Russia without the Holy Father making the consecration. He replied, “Because I want My whole Church to acknowledge that consecration as a triumph of the immaculate heart of Mary so that it may extend its cult later on and put the devotion to the immaculate heart beside the devotion to My sacred heart”.
Here something should be said about the un-Orthodox forms of devotion to the sacred heart of Jesus and the immaculate heart of Mary which the apparition advocates.
A Roman Catholic nun, Mary Margaret Alacoque (who died in 1690), allegedly had a vision of Jesus Christ who showed her His heart, burning with love, and asked her to spread devotion to it. The revelations she received were first printed in the account of her life by the Jesuit bishop Lanje and caused such a scandal that the edition was destroyed. Due to the fact that these “revelations” were so exposed to the public eye, they were condemned by Pope Clement in 1772. Nonetheless, this cult continued to exist under the auspices of the Jesuits, and finally entered into the mainstream of Catholic religious life (Pastoral Theology, Part II, Archimandrite Constantine, Jordanville, 1961, p. 16). Sacred heart pictures and devotions became a major part of Catholic spirituality, and the popes added their endorsements in encyclicals, granting indulgences for the observance of the devotion. Not to be outdone, other groups, claiming to have seen apparitions of Mary, put forward the idea of devotion to “The Immaculate Heart of Mary.” 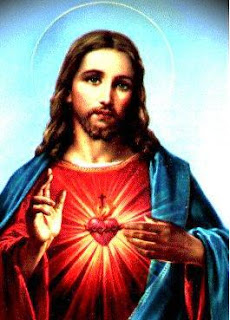