An Unforgettable Baptism In Taiwan

Read this entire inspirational story. My the Lord richly bless our new brother Tien Hen and our new sister Li Tsin. All I can say is, “And the angels were amazed!”
From here

In Tainan
Fr. Jonah Mourtos
November 18, 2009
Fragrance of Asia [ελληνικά (ΔΙΑΒΑΣΤΕ ΤΟ, αξίζει)]
This past Friday I went to Tainan, a large city of Taiwan. A Christian of ours urged me to go see a couple. The husband, around 42 years old, undergoes a kidney dialysis every week! The doctor told him he has no chance of living beyond ten years. This is the tenth year.
This Christian happened to meet them somewhere, and gave them the book The Way of a Pilgrim (it was translated by Catholics a while ago and recently republished). It should be noted that this couple were not Christians, and as the majority here they do not have a religion. In their younger years they went to the typical temples of idols as do all the Chinese. Slowly the book inspired them to start praying noetically, and this began to change them. The husband told me it gives him deep peace and calmness.
They had prepared a table for me in the office of their small company. I marvelled at their love. The wife had done everything in her power to bear the burdens of the office in order for her husband to peacefully do his work. They work together, you understand. They have two children.
They also bought a Holy Bible, but they didn’t know where to begin, so they started reading the Acts of the Apostles!
They deeply moved me. Naturally, they were willing for me to read a prayer for the sick, and I wore my epitracheli (stole). In fact, the husband makes sketches out of the stories of the Holy Bible and he explains them to his 2-3 employees during break time! See below the story of Job! I thought it very unbecoming to take pictures of them, but I was touched and took a photo of this one. 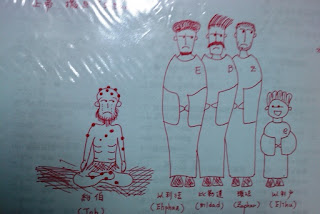 I explained to them that God was not playing with the devil, making Job suffer without purpose, but the opposite, showing forth Job as a teacher of angels, men and even demons what it means to love God….
We spoke of noetic prayer. I told them that if they want me to come every one or two weeks to talk, to read from the book together, provided that they would pay me nothing, I would go completely for free, which is something unheard of here, as every pastor takes something. I told them on Saturdays, but the husband does his kidney dialysis then. I await their reply, and I ask that you pray for them, and for the health of the husband, and that at sometime they be baptized. I don’t even know their name. I await their reply and your prayers.
An Unforgettable Baptism
Fr. Jonah Mourtos
February 26, 2011
Fragrance of Asia [ελληνικά (& εδώ)]
Yesterday, Friday, we went to Tainan to baptize a couple. I had written of them in an old post dated November 18, 2009.
A few months ago these blessed people invited me. They felt the need to become Orthodox! I asked them why. They told me they felt like they loved someone and they desire to marry Him. Now is the end of hesitations.
I taught them twice a week through Skype and I visited them often. (See, this is why I write so little as I have no time). In the end we decided for the baptism to take place on a Friday after their work.
They confessed, but I cried. They had no sins! Such rare people.
The husband does kidney dialysis twice a week for the past ten years. It was not possible for them to come to Taipei. Besides, one year ago when we met the doctor told them that the husband didn’t have any life left, but God gave it to Him.
They live by selling photovoltaics. See the photos. In the office reception room they have a Gospel book! How many companies do you know that do this?
We did everything together during the Divine Liturgy, as was the order in the ancient Church:
Dedication
Beginning of Liturgy
Entrance
Baptism-Chrismation
Wedding
Trisagion (“All who have been baptized…”)
Readings for a wedding and baptism
Great Entrance
Holy Communion
Dance of Isaiah around the small table which was the holy altar and holy communion, as in the ancient Church.
I was very moved and afraid because when I took the hand of the husband I felt the plastic tubes he had for veins…how would I do the triple circle procession? The same for the

“All who have been baptized….”

Yet it happened and he felt better. Afterwards they had a dinner. The restaurant was called “Eureka” as you can see, but nobody knew why.
We missed the quick train. We returned to Taipei at four in the morning with the bus. Naturally, I will go very frequently to do a Liturgy.
Their names are:
Tien Hen (husband)
Li Tsin (wife)
More photos here: Source
Αναρτήθηκε από ΝΕΚΡΟΣ ΓΙΑ ΤΟΝ ΚΟΣΜΟ στις 1:31 μ.μ.