St. Patrick's Hymn (sometimes known as Patrick's Breastplate, Patrick's Lorica, Patrick's Rune, and, somewhat inexplicably, The Deer's Cry) is one of the few, authentically Orthodox Celtic prayers we have left to us. It is, indeed, a spiritual treasure.
St. Patrick of Armagh, and all the Holy Saints of Ireland, pray to God that our souls be saved! 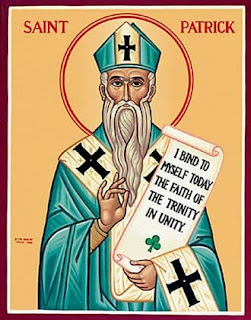 I bind unto myself today
the strong Name of the Trinity,
by invocation of the same,
the Three in One, and One in Three.

I bind this day to me forever,
by power of faith, Christ's Incarnation;
his baptism in the Jordan river;
his death on cross for my salvation;
his bursting from the spiced tomb;
his riding up the heavenly way;
his coming at the day of doom:
I bind unto myself today.

I bind unto myself the power
of the great love of cherubim;
the sweet "Well done" in judgement hour;
the service of the seraphim;
confessors' faith, apostles' word,
the patriarchs' prayers, the prophets' scrolls;
all good deeds done unto the Lord,
and purity of virgin souls.

I bind unto myself today
the virtues of the starlit heaven,
the glorious sun's life-giving ray,
the whiteness of the moon at even,
the flashing of the lightning free,
the whirling wind's tempestuous shocks,
the stable earth, the deep salt sea,
around the old eternal rocks.

I bind unto myself today
the power of God to hold and lead,
his eye to watch, his might to stay,
his ear to hearken to my need;
the wisdom of my God to teach,
his hand to guide, his shield to ward;
the word of God to give me speech,
his heavenly host to be my guard.

[Against the demon snares of sin,
the vice that gives temptation force,
the natural lusts that war within,
the hostile men that mar my course;
of few or many, far or nigh,
in every place, and in all hours
against their fierce hostility,
I bind to me these holy powers.

Against all Satan's spells and wiles,
against false words of heresy,
against the knowledge that defiles
against the heart's idolatry,
against the wizard's evil craft,
against the death-wound and the burning
the choking wave and poisoned shaft,
protect me, Christ, till thy returning.]

I bind unto myself the Name,
the strong Name of the Trinity,
by invocation of the same,
the Three in One, and One in Three.
Of whom all nature hath creation,
eternal Father, Spirit, Word:
praise to the Lord of my salvation,
salvation is of Christ the Lord.
Click here & here.


SAINT PATRICK (Latin: Patricius, Irish: Naomh Pádraig) was a Celtic Briton and Christian missionary, who is the most generally recognised patron saint of Ireland (although Brigid of Kildare and Columba are also formally patron saints).was a Romano-Briton by birth. He was probably born in 390 on what is now the north-west coast of England at an unidentified place called Bannavem Taburniae. The son of a town councillor, his grandfather had been a priest. Bearing the Roman name ‘Patricius’, meaning ‘noble’, he was brought up to speak Latin but paid no attention to the teachings of Christianity. When he was about fifteen years old, he was captured by Irish pirates and reduced to slavery to tend herds for six years. As a shepherd boy, he often came to pray and so know God. After these six years, he was told in a dream that he was to return to his own land. He either escaped or was freed and eventually managed to return to his family. Here he received training for the priesthood and travelled to monasteries in Gaul, where he stayed for some time. They may have included the monastery of Lerins in the south of France, where there was a famous monastery founded under the influence of the great Egyptian monks like St Anthony the Great. In about 435, Patrick returned to Ireland from Gaul as a Bishop. He set up his See in the north of Ireland at Armagh and encouraged the monastic life there. He also set up a school in Armagh and from there made many missionary journeys, preaching, teaching, baptising and building churches and monasteries. Bishop Patrick has left us writings that have survived to this day. There exists his Confession, or autobiography, a letter condemning slavery and also his remarkable 'Breastplate', in which he confesses his utter faith in Christ. It is clear that Patrick was extremely humble and devoted to Christ; he was an extraordinary shepherd of souls. Tradition relates that he expelled all demons and snakes from Ireland. To this day, there are no poisonous snakes to be found in Ireland.

He also taught of the mystery of the Oneness and Threeness of the Holy Trinity using shamrock, a local plant whose leaves are formed of three parts and yet are one. Much revered, he reposed in the Lord about 461. Today St Patrick is the patron saint of Ireland. He is the most popular of all the Irish saints as he is considered to be responsible for the successful introduction of Christianity to Ireland. Several places are connected with him in Ireland, such as Armagh, Downpatrick, Croagh Patrick and Saul, although the whereabouts of his relics is now unknown. There was also much devotion to him from early times not only in Ireland but also on the south-west coast of Wales and the north-west coast of England, for example at Heysham. St Patrick's feast is kept on 17 March.
Αναρτήθηκε από ΝΕΚΡΟΣ ΓΙΑ ΤΟΝ ΚΟΣΜΟ στις 1:01 π.μ.