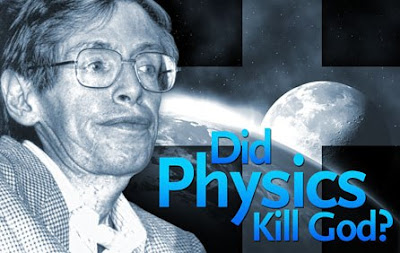 Stephen Hawking declared that our understanding of physics proves God did not create the universe. Is he right?

Stephen Hawking holds the chair of mathematics at Cambridge University once held by Sir Isaac Newton. So when he declared that our understanding of physics shows that God did not create the universe, it was bound to get attention. Summarizing the thesis of his new book, The Grand Design (co-authored with Leonard Mlodinow), Hawking announced: “Because there is a law such as gravity, the universe can and will create itself from nothing. Spontaneous creation is the reason there is something rather than nothing, why the universe exists, why we exist.”

Reports of Hawking’s claims soon spread around the world. It was warmly received by leading atheists such as Richard Dawkins: “Darwin kicked [God] out of biology,” said Dawkins, “but physics remained more uncertain. Hawking is now administering the coup de grace.”

Atheist cosmologist Lawrence Krauss offered corroborating testimony in the Wall Street Journal, saying that if the “positive” and “negative” energy are equivalent in our universe, then our world could have emerged from nothing.

Though Hawking’s announcement is being widely treated as a scientific discovery, his arguments are neither new nor compelling.

Hawking is confusing physical laws, which describe mathematically how matter behaves under certain conditions, with causal agents. Rather than explaining why the universe exists, an orderly universe with laws like gravity is one of the things that needs explaining. As Oxford mathematician John Lennox observes, calling on “us to choose between God and physics is a bit like someone demanding that we choose between aeronautical engineer Sir Frank Whittle and the laws of physics to explain the jet engine.” Hawking is committing a category error.

Second, although Hawking talks about the universe “creating itself from nothing,” he is using the word “nothing” to refer to its opposite. As physicist and Jesuit Robert Spitzer notes, gravity “has a specific constant associated with it and specific characteristics, and it has specific effects on mass-energy and even on space-time itself. This is a very curious definition of ‘nothing.’” Hawking has clearly not explained why there is something rather than nothing. He has only asserted that something comes from something. And that something still needs to be explained.

Most media reports have failed to point out this equivocation in Hawking’s reasoning. As a result, readers are left to draw an absurd conclusion: “science has proved” that nothing creates everything. One who swallows such a colossal logical camel can have no grounds on which to reject even the most far-fetched reasoning. It’s akin to denying the law of non-contradiction. If that’s allowed, then one can prove anything.

Of course, by using “nothing” to refer to something, Hawking avoids such a stark absurdity. But he also fails to solve the problem he has set for himself.

Beginning with Edwin Hubble’s discovery of the “redshift” of distant galaxies—which implied that the universe is expanding—we now know that the universe has an age, a beginning in the finite past. Initially, many scientists resisted the idea of a cosmic beginning, since they knew intuitively that anything that begins to exist must have a separate cause for its existence.

Despite such troubling theological implications, however, the evidence for a beginning—such as the redshift of distant galaxies and the cosmic background radiation—eventually persuaded even most skeptics. The question of the universe’s cause is now treated as a perfectly legitimate scientific question, even if the most popular answer is typically treated with disdain.

Add to the evidence of a beginning our discovery that the universe’s basic laws, constants, and initial conditions are exquisitely “fine-tuned” for the existence of complex life. Here things get downright spooky. Even atheists such as Sir Fred Hoyle admitted that it looked very much like a “superintellect” had “monkeyed” with physics. The combined effect of this evidence is enough to give a committed materialist a bad case of metaphysical panic. But that is not the universal response. Many prominent scientists, such as Allan Sandage, Charles Townes, Arno Penzias (co-discoverer of background radiation), and Francis Collins (former head of the Human Genome Project) see the evidence of physics and cosmology as suggesting that the universe was created.

To be sure, the issues involved are exquisitely complicated. Reasonable people can disagree about what they mean. But contrary to Hawking’s pronouncements, the case is far from settled.

FURTHER READING: Richards considered “When to Doubt a Scientific Consensus,” said “Greed Is Not Good, and It’s Not Capitalism,” and compared “The Miser versus the Entrepreneur” on why Ayn Rand is so popular today. Edward Feser calls the new atheists “The New Philistinism,” and Jason Richwine questions “Are Liberals Smarter than Conservatives?”.
Αναρτήθηκε από ΝΕΚΡΟΣ ΓΙΑ ΤΟΝ ΚΟΣΜΟ στις 9:49 π.μ.