The "Abels" of Russia

Righteous Princes and Passion-bearers Boris and Gleb of Russia 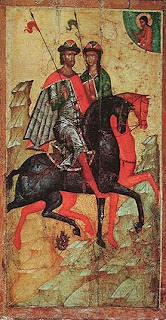 Great Prince Yaroslav the Wise of Kiev saw to it that the remains of St. Gleg, who for four years had remained unburied, were located.  He had them interred next to the relics of Prince St. Boris, in the Church of St. Basil the Great, in Vyshgorod.  Some time later that church burned down, but their relics remained unharmed, and were the source of many miracles.  A certain Varangian impiously stood on the grave of the Holy Brothers, and suddenly a flame burned his feet.
A lame youth, the son of Vyshgorod resident, was healed by the relics:  Sts. Boris and Gleb appeared to the youth in a dream, and made the sign of the Cross over his crippled leg. The youth awoke and stood up, completely healed.  The pious Prince Yaroslav the Wise had a five-cupola church erected on the site; it was consecrated on June 24, 1026 by Metropolitan Ioann of Kiev and a host of clergy. A multitude of churches and monasteries all over Rus' were dedicated to the Holy Princes Sts. Boris and Gleb, and frescoes and icons of the Passion-bearers exist in a multitude of temples of the Russian Church.
Αναρτήθηκε από ΝΕΚΡΟΣ ΓΙΑ ΤΟΝ ΚΟΣΜΟ στις 1:58 π.μ.