OODE
ΤΟ ΙΔΙΟ, ΕΛΛΗΝΙΚΑ
Fr. Evmenios was born in 1931 in Ethia of Monophatsion in the province of Heraklion of Crete, the eighth child of a poor family of faithful Christians. He became a monk at the age of 17; he struggled to cultivate his soul with love and prayer and was tested very harshly by leprosy; but later also, while a priest, by a demonic influence which tormented him in body and soul, but was freed of it after many prayers, vigils and exorcisms in monasteries of Crete, such as the monasteries of Koudoumás and Panagía Kalyvianí.
Leprosy brought him to the Hospital for Infectious Diseases in the St.Barbara suburb of Athens. He was healed there, but, having seen human suffering, he decided to remain at the Hospital as a priest, in order to help comfort his fellow-men as much as he could! That was where “he was to begin his pastoral work, in the presence of which, those with theological degrees and ecclesiastic offices ought to kneel”.
His love and his ascetic labours brought God’s grace upon him; this humble priest (who officiated in the chapel of the Holy Unmercenaries and Physicians, Saints Cosmas and Damianos, situated inside the Hospital for Infectious Diseases) reached a high degree of sanctity – which  he kept secret as much as he could – and became endowed with the gift of foresight, lofty spiritual experiences and visions and helped countless people of every social class and level of education - not only with his advice and his prayers, but also with his sanctified presence.
The Elder loved everyone, every individual personally, and he was particularly a laughing saint – his booming laugh was one of his distinctive features – likewise, he would often exit the Inner Sanctum during the course of a Liturgy, with his beard soaked by his tears, since he used to pray for all of our suffering and unfortunate fellow-men, obviously because he also had the gift of tears.
Our beloved priest laughed; he used to laugh a lot. He would laugh together with us people and would infect us with his joy. He would laugh together with the saints, with the Lady Theotokos, with the angels, and would again infect us, with the joy of the saints, of the Lady Theotokos and of the angels. Which is why, whenever we paid him a visit feeling sad and tired in body and soul, we would depart with spirits…flying high. 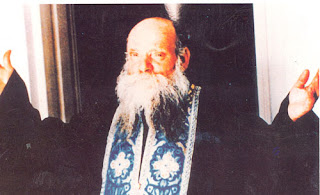 Fr. Evmenios also often laughed during the course of services - sometimes while reading the holy gospel or while censing the icon of the Lady Theotokos during the chanting of the hymn in Her honour:

“More precious than the Cherubim…” [an important troparion in honour of the Holy Mother, chanted at a predetermined point of the daily morning service – Matins], or during the “Paraclesis” services [Paraclesis = Entreaty; aka “Paracletic Canon” = a musical + poetic work comprised of prayers to the Holy Mother or to a Saint.  Christians often read paraclesies in their homes, but they are also chanted in the temple].
[…] “Whoever approached him saw a priest, a monk, with great joy reflected in his countenance. This joy would often be expressed with profuse laughter, which would either mingle with his words or overflow from the edges of his closed lips every time he remained silent.  You could tell that it was the laughter of a grace-filled man, a heart brimming with a true divine serenity and joy that poured out and refreshed those near him and made them wonder.
It was obvious that fr. Evmenios strived to restrain himself out of humility so that this divine trait would not be apparent, but he didn’t always succeed.
Whenever I visited him I would receive this gift – that is, his joy and his “different” laughter, which flowed right into to my heart. When he donned his hieratic attire and stood at the Beautiful Gate to say “Peace be to all” or to cense the icon of our Panagía at the iconostasis, his face - compared to his resplendent hieratical attire – shone far more brightly. Especially when in front of the icon of the Theotokos, during the hymn “More precious than the Cherubim…” or during the Salutations to the Theotokos, he would actually hail Her, flooded with joy and laughing on his own, as if the Theotokos had just given him some pleasant news […]” (cf. Monk Simon, Fr. Evmenios – The hidden saint of our time, Athens 2010, ed. 2, pp. 137-146).

Elder Porphyrios used to say about Elder Evmenios: “You should go and receive the blessing of Elder Evmenios, for he is the hidden Saint of our time. A saint like Elder Evmenios comes along only once every two hundred years”.
At the Hospital for Infectious Diseases, he was blessed to meet the leprosied holy monk Nicephorus who, even though blinded by the illness, had nevertheless become a great spiritual father of many Christians and a teacher to Elder Evmenios.
He spent the last two years of his life at the “Annunciation” Hospital and on May 23, 1999 he gave up his spirit in the Lord and was buried at his birth place (in Ethia), in accordance with his wishes.
The Elder’s prayer (“And God was pleased”)
The holy Elder’s secret life (= his personal ascetic struggles) is not widely known. However, the following prayer of his is of particular importance; a prayer that is included along with much more information on his life and the witness of many people who had met him (as well as many testimonies about his Holy-Spiritual (= miraculous) charismas), in the excellent book by Monk Simon, Fr. Evmenios – The hidden saint of our time, Athens 2010, ed. 2, pp. 133-134. Metropolitan Neophytus of Morphos, Cyprus, narrates the following story:

[Grace: God’s benevolent energy, which emanates towards every creature and, depending on the degree that man opens up to that energy (= he desires it and becomes suitable for it to enter him by cultivating humble love), he is saved and becomes a saint. According to the holy Fathers, Grace is “uncreated”, in other words, not manufactured: it is emitted directly by God; it is not a creation of His; thus, whoever opens up and divine Grace enters inside him will have God Himself inside him, not a creation. In other words he becomes united to God (theosis-deification).] 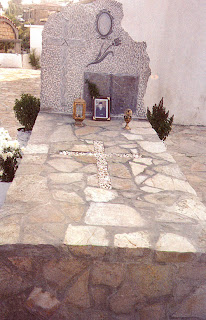 The battle with the enemy (the devil)
Because many of our readers would like something more on the subject, let us mention a few more excerpts from fr. Simon’s book (pp. 60-65).
The enemy struck when, after a series of demonic visions with wild beasts, the Elder (a young and inexperienced priest at the time, albeit with faith, full of love and a champion of prayer) ceased to have any demonic offenses and felt that he had “vanquished the devil” and had made a fool of him. That moment was an egotistic fall into a trap and the enemy struck him as he was descending the stairs at the Infectious Diseases Hospital - first on his face and eventually on his soul.
Regarding that period of his life, the Elder said: “It was a time when my tears burned my face; scalding hot tears”. His suffering ended, not with the help of psychiatry, but after fasting, vigils and numerous visits, in the company of faithful friends and fellow-villagers, to the monasteries of Crete. According to the holy elder, the final battle against the enemy took place at the Monastery of Panagía of Koudoumá; a victory by the Panagía for his sake.
It should be noted that the Monastery of Koudoumá (south of the Heraklion province) is one of the most important Orthodox monasteries of Crete and many saints rose there, such as Saints Parthenius and Evmenios (they fell asleep in the early years of the 20th century), Joachim the Dwarf, Gennadius (later ascetic of Akoumiani of Gialia in the Rethymnon province) and others.

I do not recall the exact date -
after all, I’m not very good with numbers;
they have too much logic and they tire me.
But what I certainly do recall
is that when the blessed relic arrived in our island,
after a two-day pilgrimage to the capital
I went up to the village to see a Saint.
After all, such a phenomenon is not that common!!!
When I drew near him,
a radiance that scorched every hesitation
and rationalizing custom
appeared vibrantly on his countenance.
No!!! It wasn’t just me who could see it;
there were many there, with lit candles
and wounded hearts:
He was glowing!!!!!!
But that glow had nothing of this here creation.
It was not a light in a sky of ours,
nor was it a form like those that adorn the walls
of our space and time.
It was not a frame that awakens one from oblivion
and loneliness for those departed.
It was a light, out of the light.
A radiance, of an Easter adorned.
But most of all, the thing that muted the sounds of logic
and silenced and calmed
the innermost voices of my defiant thoughts was
… those weary feet of the Saint:
they were warm and soft, like his heart;
and yet, three days had passed since he fell asleep!!!