Great Martyrs Isidore & Myrope of Chios & st Serapion "with the linen" of Egypt (May 14)...

Saint Isidore lived during the reign of Emperor Decius (249-251) and came from Alexandria in Egypt. He was an officer in the Roman Navy when the fleet commanded by Admiral Numerius chanced to be anchored off the Greek island of Chios. There Christianity was not persecuted, and perhaps Saint Isidore was not as cautious as he should have been. Somehow, the centurion Julius discovered that Isidore was a Christian, and denounced him to Admiral Numerius.

The Admiral summoned him in order to determine whether or not the allegation was true. Saint Isidore admitted that he was indeed a Christian, and refused to offer sacrifice to inanimate idols. Numerius urged him to obey the Emperor's decree to offer sacrifice so that he would not be subjected to torture. Saint Isidore replied, "You may be able to kill my body, but you have no power over my soul. The true, living God, Jesus Christ, abides in me; even after my death He shall be with me, and I with Him. I shall abide in Him, and I shall never cease to confess Him while breath still remains in my body."

Saint Isidore was led away to be tortured. In the midst of his suffering, he praised Christ God and mocked the pagan idols. Since Saint Isidore still refused to offer the prescribed sacrifice, he was thrown into prison.

When the Saint's father heard about this, he went to Chios to convince Isidore to deny Christ. He was able to persuade Numerius to place Isidore in his custody, saying that he would try to convert him. The Saint, however, begged his father to open the eyes of his soul and to learn the truth about Christ. His father was most displeased by these words, and he could not accept that his son chose to believe in Christ rather than follow the idolatry of his ancestors. Seeing that Saint Isidore would not change his mind, he disowned him and sent him back to Admiral Numerius, asking him to execute his son right away. 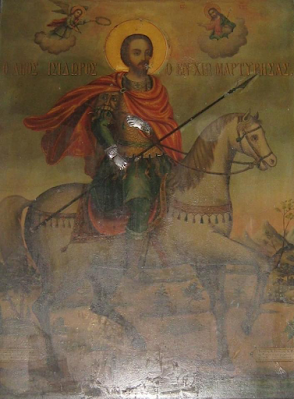 First, the Admiral ordered Isidore to be beaten with whips, and then dragged along over rocky ground. After that, his tongue was cut out. Even without his tongue, Saint Isidore was still able to speak, by the grace of God, and he continued to confess Christ. Meanwhile, God punished Numerius by causing him to loose the power of speech. Finally, the Admiral gave the signal to behead Isidore. When he heard the sentence the holy martyr was overjoyed. Praising God, he was led to the place of execution, where he was beheaded.

After the Saint's martyrdom his body was thrown into a well to be devoured by animals, but two Christians, Saints Ammonios (September 4) and Myrope ([or Merope] December 2) secretly took his body, and buried it in a secret place, with all due honor. The evil Numerius heard that the martyr's body had been stolen and wanted to kill the two guards who had been ordered to prevent the body from being taken. Learning that innocent men would suffer for her good deed, Saint Myrope appeared before the authorities and acknowledged that she had stolen the martyr's body and buried it, but she refused to tell them where. 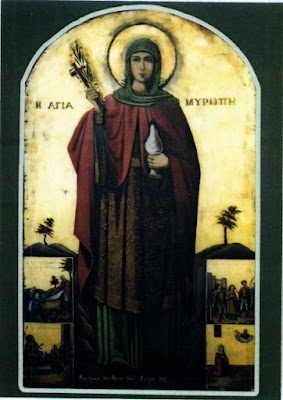 Numerius commanded that the holy virgin should be whipped, and finally she was confined in a prison, covered with wounds. But the Lord did not leave His martyr without consolation. At midnight a heavenly light illumined the prison, and many angels appeared to her with Saint Isidore in their midst. "Peace be with you, Myrope," he said to her. "God has heard your prayer, and soon you shall be with us and shall receive the crown which has been prepared for you."

The holy martyr rejoiced and surrendered her soul to God at that very moment. A sweet fragrance emanated from her body, filling the entire prison. One of the guards, seeing all of this and smelling the fragrance, told a priest about the vision. He believed in Christ and was baptized. Soon afterward, he also suffered martyrdom. Later, Saint Ammonios himself was put to death in the city of Kyzikos.

Saint Myrope's body was interred beside that of the martyr Isidore, and a chapel was built over the graves. In the fifth century, Saint Markian (January 10), the Oikonomos of the Great Church of Hagia Sophia (Holy Wisdom) in Constantinople, built a chapel by the church of Hagia Eirene (Holy Peace). He also transferred the Saint's skull and a portion of his relics to Constantinople, which he placed in the Church of the Most Holy Theotokos at Peran. 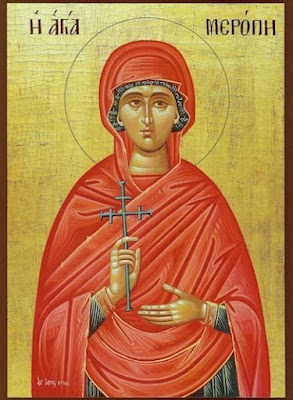 Holy icon from here
In the sixth century, the existence of the rest of the Saint's relics on the island of Chios, and the numerous miracles which occurred, is affirmed by Saint Gregory of Tours (November 17) in his book Liber in Gloria Martyrum (Book of the Glory of the Martyrs):

"The martyr Isidore is buried on the island of Chios. In the Saint's church there is a well into which he is said to have been thrown. After drinking from the water of this well, possessed people, those with fevers, and others who are sick, are often cured. It is said that believers often see a light there, similar to a burning candle. I myself met a priest who insisted that he had often seen this light from the mouth of the well. On this island a seed is picked from the mastic trees which, so they say, are not found in other regions."

Local tradition agrees that at the place where Saint Isidore was martyred, the mastic trees shed fragrant tears because of the Holy Martyr's suffering. Tradition holds that the mastic, which is a major product of the island of Chios, may be gathered and prepared only from the trees near the site of the Saint's martyrdom. 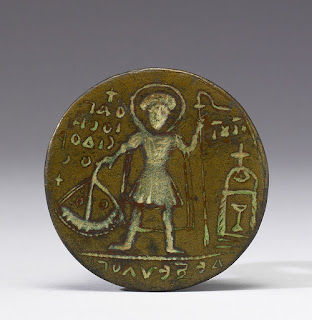 Enlisted by the King of the Ages, / you spurned the earthly king and his army to boldly preach Christ our God. / Therefore, you have completed your contest and shine forth as His glorious martyr. / Entreat Him to save our souls, for we honor you, blest Isidore.

In your combat with the dragon, / you gained the victory, O martyr Isidore. / As a radiant beacon from Egypt, / you shone forth to illumine all under the sun, / advancing towards Him who shone forth from the Virgin Mother of God, / for whose sake you were slain, O Passion-Bearer, / offering yourself as a fragrant sacrifice.

You have been revealed as a great guide to the world through your prayers, O holy one. / Therefore, we praise you today, / divinely-wise martyr, glorious Isidore. 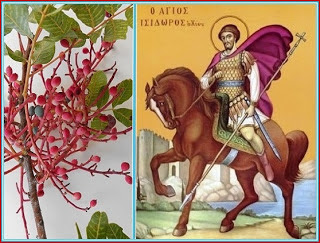 St Isidore & a branch of a mastic tree (from here)

Saint Serapion lived during the fifth century in Egypt. He was called the linen cloth-wearer (Sindonite) since he wore only a coarse linen garb called a “sindon.” From his youth the monk lived like the birds of the air, without a shelter.

For several days at a time he did not eat, not having the means to buy bread. He gave away his sindon to a beggar who was shivering from the cold, and he himself was naked.

A certain Greek philosopher, wishing to test the non-covetousness of the monk, gave him a gold coin and watched him. The saint went to the bakery, bought one loaf of bread, gave the merchant the gold coin and left, having no regard for the value of the money.

Saint Serapion led many on the way of salvation. Once, he was the servant of a Greek actor, whom he converted to Christ. The actor, imitating the example of the holy life of the saint, believed and was baptized together with all his family. He asked Saint Serapion to remain with him not as a servant, but as a guide and friend, but the monk went away, not taking any of the money offered him.

Traveling to Rome, Saint Serapion got on a ship, but paid nothing to the ship owners. At first they began to reproach him for this, but noticing that the Elder had gone five days already without eating, they began to feed him for the sake of God, and in this they fulfilled the command of the Lord.

At Rome, the saint continued to wander about, going from house to house, having nothing, accumulating only spiritual wealth for himself and for his neighbor.

By a flood of tears you made the desert fertile, / and your longing for God brought forth fruits in abundance. / By the radiance of miracles you illumined the whole universe! / O our holy father Serapion, pray to Christ our God to save our souls!