Why the Church of God performs the commemoration of souls? // The Significance of Koliva (Boiled Wheat)

The Significance of Koliva (Boiled Wheat) 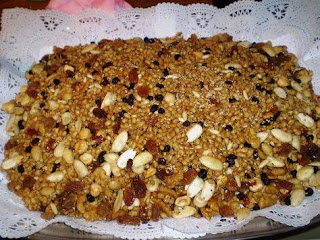 In Saint John's Gospel we find this quote, "Christ said, 'Unless a wheat grain falls into the earth and dies, it remains alone; but if it dies, it bears much fruit" (St. John 12:24). As Orthodox Christians we are awaiting the Second Coming of Our Lord and Savior Jesus Christ and the General Resurrection of the dead, through Christ we have Life, Life everlasting. But, remembering the memory of our deceased beloved ones is an opportunity to pray for the souls of the departed.

Koliva (Boiled Wheat) is an important part for the beginning of Holy and Great Lent. According to tradition, koliva is connected to Holy Lent because of a miracle from Saint Theodore the Tyro. In the 4th century AD, Emperor Julian the Apostate knew that Christians would be hungry after the first week of strict fasting, which would make them go the markets in Constantinople to buy food. Emperor Julian ordered blood from pagan sacrifices to be sprinkled on the food that was sold there, trying to force the Christians to paganism. Saint Theodore the Tyro, who had died in the early 300's, appeared to the Patriarch of Constantinople, Eudoxios, in a dream, telling him that Christians should just boil wheat from their homes and sweeten it with honey, to avoid the polluted foods at the market.

Just like the making of the Prosphora (Bread of Oblation) , a few of the faithful Orthodox Christians make koliva. However, it is necessary that Orthodox Christian men and women learn how to make koliva for their family members who are deceased and offer prayers for the forgiveness of their sins and life everlasting.

It is necessary that all of you bring the names of your loved ones for the memorial service. Make sure that the names are written legibly and that they are the Orthodox Baptismal names of the deceased. If you do not know how to write them in Greek, you may write them in English phonetics, i.e., Georgios for George, Stephanos for Steven, Hristos for Chris, Ioannis for John, etc. In other words, the way the name sounds.

Once the names are submitted they will be kept for all four Saturday of Souls. This does not mean that you need not be in church to pray for your loved ones.

Why the Church of God performs the commemoration of souls?

"Giver rest, O Christ, among the Saints to the souls of Your servants, where there is no pain, no sorrow, no grieving, but life everlasting."

Since it often happens that certain people suffer death prematurely, in a foreign land, at sea, on trackless mountains, on precipices, at chasms, in famines, wars, conflagrations, and cold perhaps, being poor and without resources, they have not been vouchsafed the customary psalter readings and memorial services, moved by love for mankind, the Divine Fathers ordained that the Orthodox Catholic Church make commemoration of all people, a tradition which they inherited from the Holy Apostles, in order that those who, dues to some particular circumstance, did not receive the customary obsequies individually, might be included in the present general commemoration, indicating that whatever is done on their behalf confers great benefit on them.

This is one reason why the Church of God performs the commemoration of souls. A second reason is that, since the Holy Fathers intended, as is fitting, to assign the observance of the Second Coming of Christ to the following day, they appointed a commemoration of all souls on this day, as if propitiating the dread and unerring Judge to show them His innate compassion and place them in the promised Paradise of delight. A third reason is that, since they intended to expound the banishment of Adam on the following Sunday, they devised the present commemoration, on this day of rest, as a respite from, and end of all human affairs, so that they might start from the beginning, that is, the banishment of Adam--for the final event that we will experience is the examination by the impartial Judge of all the deeds that we have committed in our life--and so that, putting fear into men thereby, they might make them ready for the contest of the Fast.

We always commemorate souls on Saturday, because savvaton (Sabbath) means "rest" in Hebrew; and since the dead have rested from worldly and all their cares, we offer supplications for them also on the day which means "rest'. It has become customary for us to do this every Saturday. On the present Saturday, we observe a universal commemoration, beseeching God for all the pious. The Holy Fathers, knowing well that what is done on behalf of the reposed, that is, memorial services, almsgiving, and liturgies, affords them great respite and benefit, allow the Church to do so on both an individual and a general basis, a tradition which they received from the Holy Apostles, as Saint Dionysios the Areopagite tell us. (To be continued)

"Through the Apostolic Constitution (Book VIII, ch. 42), the Church of Christ has received the custom to make commemorations for the departed on the third, ninth, and fortieth days after their repose. Since many throughout the ages, because of an untimely death in a faraway place, or other adverse circumstances, have died without being deemed worthy of the appointed memorial services, the divine Fathers, being so moved in their love for man, have decreed that a common memorial be made this day for all pious Orthodox Christians..."


Orthodox Spiritual Legacy: A Guide to the Triodion and Lent, on the Road to Easter
Two Deaths
We and the spirits of the departed
An unexpected death in the Maasai

Our little birds perish singing
Why’s the smile of elder Joseph of Vatopedi from eternity?
Death! Death! DEATH! (The Mystery and the Process of Death)
Theosis (deification): The True Purpose of Human Life
Theosis, St. Silouan and Elder Sophrony
Orthodoxy's Worship: The Sanctification of the Entire World
The Firstborn From the Dead
Death is Unnatural
A Deer Lost in Paradise
A revelation on the torments of hell to St. Makarios the Great
Bones, Bodies and Belief
LIVE, BEYOND THE LIMITS!
Αναρτήθηκε από ΝΕΚΡΟΣ ΓΙΑ ΤΟΝ ΚΟΣΜΟ στις 10:07 μ.μ.