When the Very Reverend Archimandrite Gervasios Ioannis Raptopoulos, ordinal preacher of the Holy Greek Church Congress  served in the Holy Eparchy of Serres and Nigrita, he unofficially established the Meatfare Sunday as the ’’The Prisoner’s Day”. It is on this Day that the Gospel passage of the Last Judgement (Math.25, 31-46) is read during the Holy Mass. Afterwards, it was officially consecrated as the ’’Diacony for the Release of Poor Prisoners“ and it came under the Orthodox Sisterhood "SAINT XENI" as a section of it. Father Gervasios is the founder and the spiritual coordinator of this Sisterhood.

On Meatfare Sunday 5th March, 1978, Father Gervasios started his annual charity settings out to those ’’in prison … marginal Christ’s brothers“(verse 40) having in mind’ the message of the day. “I was in prison and you came upon me” (verse 36). Eight hundred Orthodox Christians from Serres took part in this first dash. They travelled by 15 buses and private cars. 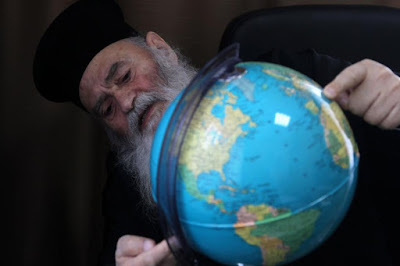 In this Sunday, Feb. 2, 2014 photo Father Gervasios Raptopoulos points to a globe to show countries he has visited during an interview with the Associated Press in the northern port city of Thessaloniki. The soft-spoken 83-year-old with a long white beard and black robes has helped more than 15,000 convicts secure their freedom over nearly four decades, according to records kept by his charity. The Greek rules apply only to people convicted of offences that carry a maximum five-year sentence, such as petty fraud, bodily harm, weapons possession, illegal logging, resisting arrest and minor drugs offences. (AP Photo/Nikolas Giakoumidis, from In Greek crisis, priest buys inmates their freedom).

Year by year, the Christians’ participation increased as even more people from the wider region of Serres took part in this effort. In the decade of the Diacony (1987) there were five thousand Christians participating, even from neighboring eparchies, where F. Gervasios also served as a preacher, i.e. from the eparchy of Zichni – Nevrokopi (1959-1966), Siderokastro (1966-1974), all over Makedonia and other regions.

Afterwards, the Diacony overcame the limits of Makedonia and it visited the Agricultural Juvenile Prison Branch in Kassavetia (1989-3.000 Christians), the Agricultural Prison in Tyrintha (1990-900 Christians), the Agricultural Prison in Chania, Crete (1991 -300 Christians) Kassavetia. And then we went even further… We visited the Central prisons of Nicosia, Cyprus (1992) by a chartered plane accompanied by 99 Christians, as this was the utmost plane capacity. On the same day, the Day after Easter, 1992, four poor prisoners were released by a Diacony’s donation of 750 Cypriot Pounds (i.e. 350.000 drachmas). It was a news item that the daily Cypriot newspapers covered by presenting it on their first pages.
And the trail keeps up

Love, Christian love is unlimited. It hugs the whole world, without regard to the race or religion. The first dash took place in Israel, where Greeks are imprisoned. In this setting out, 100 Christians took place. The second mission accomplished is the one to the Egyptian Prison of El Kanater in 1998 and 1999, with a representative number of Christian visitors due to the strict Egyptian rules. Three life prisoners, Greek sailors of the motor ship “Thanasis” were kept there. And then, in 1999 the forward leap came. The Diacony visited the south hemisphere, the Central Prisons in Madagascar, where 2.500 prisoners were kept. At that Easter, after F. Gervasios’ speech, a rich traditional Easter lunch was offered accompanied by red Easter eggs. This banquet was offered since then every Easter and Christmas. It took place at the Diacony’s expenses and under the Greek Orthodox Bishop’s care, the Right Reverend Nektarios (who is appointed there) and also under his successor’s the Rt. Reverend F. Ignatios’ care And the missions are still going on twice a year, every Easter and Christmas not only in Greek prisons but also in prisons abroad.

There is also the spiritual aid to the prisoners with sixteen books* that have been written by F. Gervasios and published by the Orthodox Sisterhood "SAINT XENI” These books have a relevant content and can be found in the Greek prisons).

Apart from the moral and spiritual aid, the Diacony releases poor prisoners by paying the judicial costs and apart of their custodial punishment, with a limit offer amount of €300 for each prisoner. In addition the Diacony pays up the punishment of poor defaulters for the same amount. The criteria for the payment are the evaluations of the Prison’s Wardens, the Social Services and the nearest Police Station or Security Station. A special private letter is sent to every single released prisoner. There are about 14.000 poor prisoners and defaulters who have been released so far. These people come from not only Greece but also from 80 countries all over the world. The total sum that has been given since 1978 has been approximately €4.000.000,00. 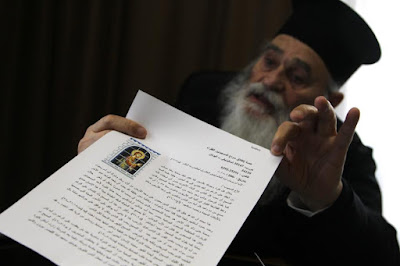 In this Sunday, Feb. 2, 2014 Father Gervasios holds up a letter, in Arabic, copies of which are handed out to all prisoners his charity frees, in their own language, explaining why they receive the help in the northern port city of Thessaloniki. The soft-spoken 83-year-old with a long white beard and black robes has helped more than 15,000 convicts secure their freedom over nearly four decades, according to records kept by his charity. The Greek rules apply only to people convicted of offences that carry a maximum five-year sentence, such as petty fraud, bodily harm, weapons possession, illegal logging, resisting arrest and minor drugs offences. (AP Photo/Nikolas Giakoumidis, from In Greek crisis, priest buys inmates their freedom).

The only financial funds of the “Diacony for the Release of Poor Prisoners” are the offers of the Greek Christians. By their contribution, the Diacony has been keeping up its mission since 1978, for 33 years without a hitch.

And his prayer:
“Lord,
Please, teach us how to love those who have not been loved. Make us suffer for the other people’s pain. Don’t let us be happy alone. Give us the agony of the international unhappiness and protect us from the other people’s oblivion”.
*The books about the prisoners are:
1. Nice routes along with God’s people.
2. A King in the Prison.
3. 10 Brothers in the Prison.
4. A Robber becomes a Saint.
5. Searching for the robber.
6. Christ the Imprisoned.
7. Saints in front of Robbers.
8. The Tragic End of a King and his People
9. 37 Years in Babylon’s Prison
10. Good morning, Prisoners.
11. Of the Prisoners’ Pulpit.
12) The Christ’s Last Speech.
13) Holy Monastery of Robbers.
14) Saints Barbarians.
15. Why I Went to Passaris.
16. Heaven’s (Paradise’s) Robbers.