The Orthodox Christian sentiment regarding the persecutions of Christians by Islamists


One of Christ’s fundamental commandments – which separates Christianity from the multitude of religious traditions of the world – is to love one’s enemy. 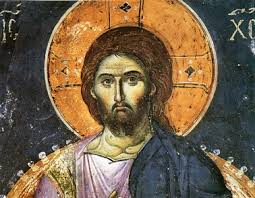 Jesus teaches people to love, not only those who love them, but also their enemies (Luke 6:27-37). And true love involves one’s desire for the other’s well-being and sorrow for his misfortunes.

The first one to actualize this ideal was the Lord Himself, by forgiving His crucifiers while He was nailed to the Cross. He even gave an important reason for this display of love: “…for they know not what they are doing” (Luke 23:24).

Later on, saint Stephen the first martyr reacted in the same manner towards those who were stoning him to death: before leaving his last breath, he prayed to the Lord God – Jesus Christ – to not take their sin into account (Acts of the Apostles 7:60). In the centuries that followed, innumerable saints, but also simple Christians, have done (and continue to do) the exact same thing towards their enemies.

Most certainly, even in the Orthodox Church, rather few are those who are able to bear the burden of this commandment, which can strangle man’s survival instinct (transformed here into a sense of justice: I hate you or I take my revenge, because “that’s just”); it also confronts passions that are deeply rooted inside us; it presupposes a state of holiness, even if an embryonic one… or rather, a choice in favour of holiness – necessarily honest and humble – which places man at the starting point of a long and difficult – but also a brightly shining journey.

This is pointed out by Jesus Christ, when He says that the gate of Paradise is narrow and few pass through it, and that the road leading to it has sorrows (Matthew 7:13-14). It is – among other reasons – strewn with sorrows because the Christian who loves his enemies and desires what is for their benefit, must also confront those who he is closely linked to (relatives and friends), who, as a rule, strive frantically to change his mind and convince him – even by forcing him -  to hate his enemies.  He will not only be grieved by such psychological warfare (which functions as a temptation – that is, as a trial according to the holy teachers of Orthodoxy), but he will even forgive his own people for torturing him in that manner (supposedly “for his own good”), while at the same time he will be continuing to stand fast in the throes of the war that is being waged against him!

He is essentially at war with his own, when defending his right to love all people and to obey the command of Christ - his beloved Teacher and Head.  That way, he is also fulfilling yet another commandment of Christ – that “a person’s enemies shall be the people of his household” and that His true disciple will love Him more than the members of his own family (Matthew 10:35-38).

Christ’s Disciples – the holy Apostles – as has been very aptly pointed out had also applied that commandment of loving their enemies, when they had addressed the Judean people on the day of the Pentecost (Acts of the Apostles, ch.2).  The Judeans were stunned by the Apostle Peter’s speech, in which he had directly accused them for their crucifixion of Christ, following which they had asked him “what should we do now?”  The apostles had replied “Repent, and be baptized in the name of Jesus Christ, in order for your sins to be forgiven, and so that you may receive the gift of the Holy Spirit.”  In other words, the Apostles taught the path to salvation – their union with God - to the very people who had consented to the crucifixion of Christ; they guided them to the redemption from that sin and from all their other sins; they did not ask for God’s revenge and His striking back at them! 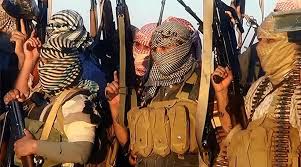 Therefore my brethren, when we happen to write about the persecution and the massacring of Christians by the Islamists of our time – or by atheists, as happening for example in the atrocious status quo of North Korea – we don’t do it in order to ignite any sort of religious hatred towards those of other religions or to exacerbate any religious fanaticism.  We also don’t do it in order to inspire the flare-up of any nationalist displays and the raising of banners and swords or spears.  Nor does our endeavour have anything to do with political expediencies.

The reasons that urge us to project these events are entirely different.  It is our desire that the enemies of Christians realize their mistake and repent, and to return to Christ’s holy Orthodox Church and be saved. Not to be judged or be punished, but to be saved. (Many murderers or torturers of saints throughout History have come to repentance and have been saved, and later even martyred, whom the Church has similarly accepted as saints (*)).

It is also our desire to reinforce our brethren, the persecuted Christians, with our support and our prayers, as much as that is possible, so that they may have the strength to bear their terrible struggle.

We are hoping that those who have the possibility of intervening on an international level might be moved and proceed to a political action so that our brethren might be relieved of their persecutions, because martyrdom may lead many people to sainthood; nonetheless the pain inflicted on our fellow-man is not a desirable thing for us. Besides, martyrdom can lead some into perdition and the victimizers into damnation.

We seek to make them understand - who may not have understood as yet how Orthodoxy differs from anything on the opposite shore – that they should cease to despise Orthodoxy; instead, they should approach it and be benefited by it, by allowing the Grace of God to enter them and remain there for eternity. 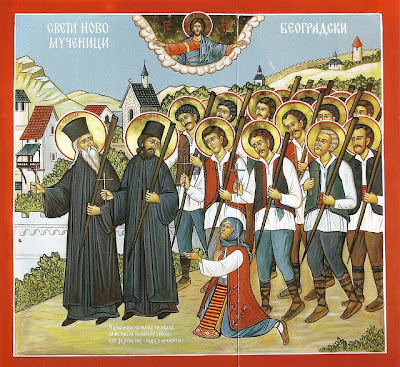 New Martyrs Avakum the Deacon and Paisius the Abbot of Serbia


We also desire that the steadfastness and the strength of the contemporary martyrs and confessors of Christ become an example to us also, in order that we too may undertake our own struggles, with our own difficulties – be they analogous or fewer. (Here too are many who struggle to the extreme – perhaps not on account of massacres, but because of illnesses and other tribulations – and are called upon to become martyrs and saints from within those sufferings, with the help of God and all of us, their brethren).
Finally, it is the desire of all of us (let me say this also) to congratulate our brethren the martyrs and confessors of the faith, for their terrestrial struggles and their eventual heavenly award.

Yes, we do declare war against bloodthirsty religions and in general all the paths of delusion and death. But it is not a war consisting of violence and hatred, but one of love, prayer, and mission.  In that war, the enemy is one:  Satan. And its objective is to defend those very same brethren of other faiths and heresies, who have become victims of that enemy and frequently the instruments and the servants in his plans.

“Our war is not intended to bring down people, but to lift up those who have fallen”, as the blessed saint Chrysostom used to say (PG 50, 841-842). And believe me, Orthodox Christians are not the fallen ones, but rather our enemies (who are not actually our enemies, but are brethren who have fallen victims to the devil).

Muslims boast about their religion being “realistic”, inasmuch as it proclaims war against all enemies. Similarly “realistic” was the heretical form of Christianity which had taken shape in Western Europe during the last thousand years – or even more. However that “reality” leads mankind away from God. We Orthodox – thank God! – are not such “realists”; nor are we angels. We are merely sinful people. We merely struggle – as much as we struggle – in the hope of attaining Heaven. If we had set our sights on earth, we didn’t have to be Orthodox Christians. “Orthodox” means to aspire towards attaining Heaven, towards reaching Christ, the angels and the Saints. You strive for heaven, when you yearn to be elevated there along with all your fellow-men, and yearn even more so, for the unfaithful (infidel) and the unrepentant ones – that is, for those who seem to be in more danger of perdition.

Throughout all of Orthodoxy’s history, every missionary endeavour (beginning from the apostolic years, as Orthodoxy is the absolute historical and spiritual continuation of the ancient Church) is for their sake: for the unfaithful and the unrepentant, imperiled brethren – for their salvation.

This is the view of Orthodoxy that this lowly website wishes to express.  Forgive me, my brethren. And thank you.

(*) From here: We ask them to emulate the example of saint Longinus (the head of the Roman garrison that had crucified Jesus Christ), who, upon seeing the darkness and the earthquake that occurred during the Crucifixion, unhesitatingly confessed the divinity of Christ (Matth. 24:57, Mark 15:39), himself became a Christian and was bestowed with sainthood.
Then there are also the examples of saint Hermogenis (the potentate who had tortured saint Menas the Sweet-voiced), also the blessed centurion Porphyrion (Saint Catherine’s jailer), the saints Stratonikos, Codratos and Acacios (who had tortured the holy martyrs Paul and Juliana in 270 A.D.) and a host of others who, upon witnessing the bravery and love of those being martyred, found peace in their own hearts, repented, opened their hearts to Christ  and even offered their own lives, thus gaining eternity for themselves.

Paul, the Christian equivalent to Mohammed
The Penalties for Apostasy in Islam

Saints
Orthodoxy's Worship: The Sanctification of the Entire World
Holy Neomartyr Chryse as a Model for our Lives

LIVE, BEYOND THE LIMITS!
Theosis, St. Silouan and Elder Sophrony
A smile from eternity & a barefoot saint in USA...
GREECE: ELDER PORPHYRIOS & THE HIPPIES…