The significance of the “Antilytron” [*] 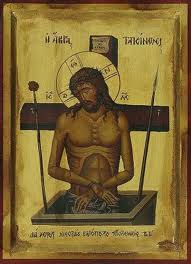 When Papism distanced itself from the Orthodox faith of the Church, its understanding of important issues pertaining to salvation was lost. Totally ignorant of how these issues can be misleading, Protestantism in its turn “inherited” the fallacious Papist positions and in fact, it quite often made them even hazier.

One such issue, which has been misconstrued to the point of blasphemy by the Westerners, is the issue of the “Antilytron”.

In their pursuit of Thomas Aquinas’ erroneous theories, Westerners developed their own juridical system by which they explain the ‘function’ of our Lord Jesus Christ’s sacrifice in the salvation of mankind.

Although there may be small differences between the various Western religions, they make the following, general assertions:

“Adam sinned, therefore in his person, all of mankind after him partook of sin. Everyone consequently had to undergo death, as they too were deemed guilty of the original sin. However, no sinner was as worthy as the relatively sin-free Adam to pay for the sins of all mankind. Thus, in order to satisfy His sense of justice, God sent the sinless Jesus Christ to suffer death in the place of mankind. This was the way that He “paid for the release” of mankind –as Adam’s equal- and whomsoever believes in His sacrifice, is released from death.”

But if we observe these assertions more carefully, we will realize that they are also irrational, and have nothing to do with the Christian faith, and especially with God’s justice and the incarnation of the Lord.
The problems with the juridical position

First of all, let’s take a look at some of the initial problems that the above positions create:

a. If Adam was the one who sinned, why did God consider all of mankind guilty? Isn’t that unfair?

b. If, however, God didn’t consider all of mankind guilty, then what kind of justice was that which had to be satisfied, by demanding the death of someone who is not guilty?

c. Was Jesus Christ truly an equal to Adam, who was a mere creation?

e. If the ‘offer for release’ (=the Lord’s self-sacrifice) was in fact the offering demanded for the freeing of mankind from death (as in cases of abduction and the ransom demanded), then to whom was this ‘offering’ made?

f. If this ‘offering’ was made to God, then God must be identified as the ‘abductor’ who demands an offer for the release, and who would also be satisfied by one’s condemnation to death.

g. If the ‘offering’ was made to the Devil, then it must have occurred, despite the will of the just Lord. So, how did the Devil compel God to deliver His innocent Son to death, as an ‘offer for the release’ of mankind? That would mean the Devil has power over God!

The various misinterpreters of this topic say that “Lytron” implies the compulsory payment of a certain sum of money for the release of a captive. But let’s see what the word really means, in the Holy Bible:

“When these things begin, you must rise up, and lift up your heads, for your final release is imminent” (Luke 21: 28).

Given that the above words are used in reference to the Second Coming of the lord, they cannot possibly imply a payment of any kind. It is therefore obvious, that the expression “final release” signifies a setting free, without any payment demanded.

”Blessed is the Lord God of Israel, for He visited and implemented the release of His people..” (Luke 1: 68).

In this excerpt also, it indicates that the “release” has already taken place (text is expressed in the past tense), before the time of the Lord’s sacrifice. We see therefore that nothing was actually “paid”, and that the word “lytron” is used in the sense of “releasing” or “liberating”.

Similarly, the word “lytron” when used in reference to the Lord’s sacrifice, doesn’t necessarily imply the payment of a certain amount; it bears the meaning that this sacrifice released/liberated us, WITHOUT A PAYMENT being involved, to anyone.

Heresies that do not admit the divinity of Jesus Christ are somewhat justified in making this mistake, hence, they are not able to comprehend the true meaning behind Jesus Christ’s sacrifice as analyzed below. Those however who are entirely inexcusable are the ones who –although admitting Christ’s divinity- maintain that Adam was the Lord Jesus’ equal.

Let’s take a look at a few Scriptural excerpts on this topic, where the superiority of Jesus’ sacrifice as compared to Adam’s disobedience is made very evident.
Romans 5: 15 - 20

But, misbehaving is not the same as giving. Because, if through one’s (Adam’s) misbehavior the majority suffered death, by comparison the Grace of God and the gift in Grace of the one person, Jesus Christ, was made abundant to many.
And the gift was not as though from one who had sinned. While the judgment that befitted the one (Adam) resulted in condemnation, the gift (Christ’s sacrifice) that sprang from the misbehavior of many, resulted in vindication. For, if with the misbehavior of one (Adam), death came to reign on his account, on the contrary, those who received the surplus of Grace and the gift of justice shall reign in life, through the one: Jesus Christ.
So therefore, just as through one misbehavior (Adam’s) all people were condemned, thus through one justice (Christ’s), all people were vindicated for life. Because, just as through the disobedience of one (Adam), many became sinners, thus through the obedience of one (Christ), many became just.
Therefore, wherever sin was abundant, there Grace was excessively abundant.


What more can one say? It is clear here, that while Adam’s sin became the cause of sin for many, the Lord’s sacrifice was obviously far superior, in than it not only erased Adam’s sin, it erased all the accumulated sins of billions of sinners!

The recipient of the Lytron

If the Lord’s sacrifice was the “price” paid for the release of mankind from the bonds of death, it could not have been paid to God, because the one who reigns over death is the devil, and not God:

“….so that through death, He (Christ) may abolish the one who held the power over death - that is, the devil – and release those who, through fear of death, were forever subject to bondage….” (Hebrews 2: 14 - 15).

But then, if God had to pay something to the devil, it would mean that God didn’t have the power to impose His will “for free”. That would have made the devil a victor. However, the devil and all of his “crew” were in actual fact defeated, when Jesus died on the Cross. (Colossians 2: 13 - 15). If Satan were to receive a ‘release payment’ in order to set mankind free from the bonds of death, then Satan would have been victorious, and not Christ.

At any rate, the Holy Bible says that “God is Love”, not “justice”, so there is no chance that God would have wanted to sacrifice Love for the sake of a supposedly offended case of justice that required reciprocation. Not to mention that the death of an innocent person in the place of guilty persons would have signified injustice, and not justice.

God didn’t harbor any hatred for mankind on account of their sins! It was mankind that perceived God as a judge, on account of their own, unclean conscience: “…for, although we were enemies, we were reconciled to God through the death of His Son….” (Romans 5: 10)

God always loved us as a father, and never demanded satisfaction for any supposedly “offended justice” of His. We see this, in John I, 4: 9. 10:

“In this, was God’s love for us made evident: that He sent forth His only Son into the world, so that we might live, through Him. In this, is Love: it is not because we loved God, but because He loved us and sent forth His Son for the atonement of our sins.”

The significance of the Lord’s sacrifice

The Church teaches that the Lord Jesus Christ became a perfect human so that - being one of our kind - He would defeat all those things that defeated and brought about sickness to human nature.

In His (Christ’s) person, human nature overcame sin, the devil and death. Because whoever allows himself to be defeated by someone, becomes that person’s slave”. (Peter II, 2: 19).

Therefore, in order for the Lord to rise from the dead and thus defeat death, He first had to die. But now, through faith in Jesus Christ, and in communion with His Body –the Church- every person can partake of this victory!

N.M.
Translation by A. N.Greek text
* Antilytron (Greek): anti (= in place of), lytron (= an offer for someone’s release/freedom)
Click:
Was Adam created perfect?
The juridical mentality of the West annuls Christ’s sacrifice
LOVERS OF TRUTH: THE LIFE OF HIEROMONK SERAPHIM ROSE

OUR TALENT OF FREEDOM & SOME PITFALLS
A Deer Lost in Paradise
LIVE, BEYOND THE LIMITS!

Literature, Culture and the Western Soul
THE ORTHODOX SAINTS OF THE ANCIENT CHURCH IN THE BRITISH ISLES AND IRELAND
Orthodox America - By Issue Number
Orthodox England
"The Orthodox World"