The perennial honoring of saints by the Church 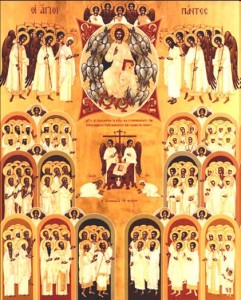 by fr. Anthony Alevizopoulos An excerpt from the book: “A Manual of Heresies and para-Christian Groups”Translation by A.N.
Orthodox Outlet for Dogmatic Enquiries Greek text (& here)
This topic is extremely important, given that all the Protestant denominations adamantly criticize our Church, by claiming that we worship the saints and that we look to them for salvation, and not to our Saviour, Jesus Christ! It is therefore a poemantic necessity to clarify in which way the Orthodox Church honors its saints, and to whom this honor is essentially directed. We need to stress what kind of association we have with our saints, and what this association involves. We furthermore need to respond to the Protestant objection that the saints are not ever-present and hence are unable to hear our prayers. We also need to interpret the manifestation of miracles that are performed by the saints and to scripturally reinforce their veracity; to also refer back to the first Church, to see whether the honoring of saints was observed there and –above all- to make a very clear distinction between the terms “honoring” and “worshipping”, to describe what the difference is between the prostration of worship and of the adoration, which is an expression of honour and love that we bestow on the saints. According to the faith of our Church, the saints are a reflection of God’s glory (Corinthians II, 3:18); they radiate the uncreated Light of God (Matthew 5:14, John 8:12, Ephesians 5:8, Colossians 1:12 and Revelation 22:5). The glory of the saints and the angels is not independent of the glory of Christ, because they are members of His body (Ephesians 1:23, 4:16, 5:23, Colossians 1:18-24). They are named the “beloved ones of God” (Chronicles II,20:7, Isaiah 41:8), the Friends of God (Psalms ρλη' 17 according to the Septuagint, John 15:14, James 2:13), the Brothers of Christ (Matthew 12:50). A saint is the temple and the domicile of God (Corinthians I 3:16-17, 6:19, Corinthians II 6:16), the children of God (John 1:12, Galatians 3:26-27), Christ’s inheritors and co-inheritors (Romans 8:17). Furthermore, the commemoration of the saints is everlasting (Psalms ρια/ριβ' :1-9, Proverbs 10:7, Hebrews 11:4-38). God Himself, through the Holy Body of Christ, comes into personal communion with mankind and bestows him with holiness. This holiness is of the Body of Christ, not of an isolated person, and it is not dependent on the person’s communion with Christ (John 14:23, Corinthians I 3:5-17, 6:19, Corinthians II 6:16, Ephesians 2:22). It is in this manner, that Christ triumphs through His saints (John 21:19, Corinthians II 2:14). In John’s Revelation, the 24 elders –who represent the triumphant Church- wear “crowns of gold upon their heads” (Revelation 4:4) The innumerable hosts of the saints, who “washed their robes and whitened them in the blood of the Lamb” (Revelation7:14), are arrayed “in the presence of the Throne and in the presence of the Lamb” as victors (Revelation 7:9-10); to them were given “thrones”, so that they would “reign for one thousand years”, until the Second Coming, when the Body of Christ –the Church- is to be delivered by its very Head to the Triadic God, so that thenceforth, “God will be everything, in everything” (Revelation 20:4, Corinthians I 15:23-28). Christ is the only “Paraclete” (the One Who is called upon), the only “mediator” and “saviour” (John I 2:1, John 14 6:13-14, Timothy I 2:5, Acts 4:12); reconciliation can only be attained with the blood of Christ (Peter I 1:18-19). The “other Paraclete” (One Who is called upon), i.e. the Holy Spirit, activates -through the holy Sacraments- the endowments of Christ: i.e., through Holy Baptism it makes us members of the Body of Christ, the Church (Galatians 3:27, Corinthians I 12:3); through Holy Communion, it nurtures us with the “bread of life” (John6:48-3). Thus, in this absolute context, there cannot be another savior, or a second mediator. And yet, the Scripture does mention the mediation of people and angels, through prayer and supplication (Genesis 18:23-33, 20:3-18, 32:9-14, Job 42:8-10, Proverbs 15:8, Zechariah 1:12-13, Jeremiah7:16). There are certain people who are referred to as “ambassadors” (Corinthians II 5:18-20, Ephesians 6:20) and also as “saviors”, but only in the sense that they lead us towards the only true Savior, Christ (Corinthians I 9:22). God assures the prophet that even if one holy man were to be found, for his sake alone, the entire city would be saved (Jeremiah 5:1, Ezekiel 22:30). 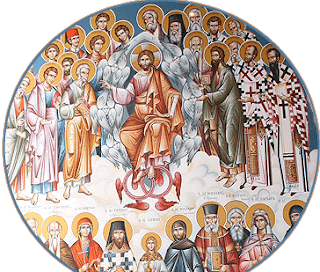