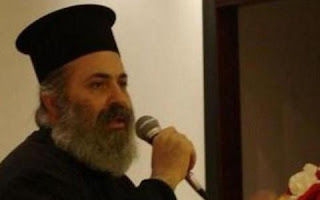 Monasticism was the first spiritual school in which the divine Chrysostom served and of which he wrote about. At eighteen Chrysostom was convinced of the vanity of his secular career and he leaned towards the divine writings. At this time he began studying at the famous "Asketerion" of the somewhat professor Diodorus, though it is unknown under what conditions.

The "Asketerion" was a sort of monastic school with ascetic standards, where the interpretation of the Scriptures was primarily taught, but also the faith of the Church and general theology.

Chrysostom lived as a monk for a few years - only six - and he never ceased to admire monasticism and apply himself to this quintessential exercise.

It should be noted emphatically that the information Chrysostom gives about monks and ascetics is the first major named source we have about Syrian monasticism.

Syrian monasticism developed around the area of Syria. It was the ideal of a strict ethical-ascetical life and continence, with the effect generally of eastern and related concepts (rigorismus), and in particular the impact of dedicated groups (the sons and daughters of the Covenant) and the anchorites of Mesopotamia. Near Antioch, in the caves of Mount Silpius and along the banks of the Orontes River, around and within the towns of Gindaros (currently Jenderes) and Teleda, and specifically in the region of Antioch and its surrounding mountains, many monks lived as anchorites, as well as two or three together as cenobites.

The anchorites did not follow structured rules, and they had much freedom in the ways of their ascetical efforts. There were many anchorites, or rather remoboths as Jerome called them in Latin. Chrysostom himself lived as a remoboth for four years and as an anchorite for two. 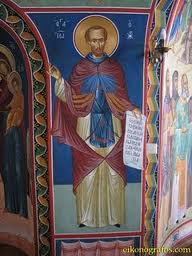 This is why in his writings he highlights personal experiences from his own ascetic struggles. When Chrysostom speaks of asceticism, of its conditions and benefits, he refers to all kinds of monasticism. However he was strongly influenced by charismatic monks, such as Macedonius and the illiterate Julian Sabas († 377), who visited the city of Antioch and the crowds venerated him more than the kings: "When he came into the cities, (and this was but rarely,) never did such a concourse take place, not when orators, or sophists, or any one else rode in. But what am I saying? Is not his very name more glorious than that of any king's, and celebrated even to this day?" (Homily 21, On Ephesians).

In this way the children of nobles, disgusted by the luxury and the liberality of life in Antioch, abandoned riches and parents, and followed the ascetic monks. Chrysostom rejected outsiders such as the Messalians, who were condemned synodically as well as by Flavian of Antioch (390).

The majority of monks then were unaware of Greek, as evidenced by the fact that in some monasteries the Services and Divine Liturgy were chanted in both Greek and Syriac.

Monks were even more impressed into the consciousness of Christians when, in 387, after being burdened with heavy taxes the riotous crowd of the city toppled the statues of the imperial family, and emissaries of Emperor Theodosius began a persecution, trials and executions of rebels. At that time many monks, who for decades lived in asceticism in communes and hermitages, came into Antioch and begged the judges and military to have compassion on the unfortunate rebels of Antioch. Indeed, they often offered themselves up.

From the period of Chrysostom's life in Antioch comes the majority of his ascetical works. So from the ascetical spirit of the entire Christian ethic of the Saint, the same wrote clear ascetical works. By 382 he wrote four Reasons which display cenobitic monasticism as a community free from passions. Noteworthy is that great fathers of the Philokalia of the 4th and 5th centuries were disciples of Chrysostom, such as Mark the Ascetic, Cassian the Roman and Nilus the Ascetic. Characteristic of them, beyond all other ascetic fathers, is the continuous use of Scripture, which is naturally the result of the teachings of the most-biblical Chrysostom. Nilus however is allegorical, which is foreign to the teaching method of the sacred Chrysostom. Because there were monasteries in Antioch, which mainly functioned as schools for young people, such as, for example, the "Asketerion" of Diodorus and Carterius, where Chrysostom studied, it was argued that a young person could find the most suitable education there.

Chrysostom's enthusiasm for monasticism and his occasional need to apologize for it, before the very cosmopolitan society of Antioch, led to strong surges considering monasticism entirely, with monks, according to him, choosing the excellent state.

Chrysostom's preference is not a contradiction to his teaching that Christian perfection is also possible in the world, because the superiority of virginity is not ethical but rather in its way and method. The sacred father concludes this from the following: Because life in the cities has been equated with the "goings on of Sodom", and because the prevailing corruption has eclipsed the necessary conditions to exercise Christian perfection. Because cities have, in his opinion, ended up in a satanic fire, a monastic community is safer. It was a prayer for Chrysostom to have a perfect society, so that monasteries were not necessary; that is, if society identified with the Church and the world identified with the kingdom of God. That is, if monks ruled, or kings "philosophized", there would be no need for monasticism. Worthy critics of the situation as it is in reality are not the monks, but those who make cities a rugged terrain of the virtues.

Source: Excerpt from a lecture titled "Saint John Chrysostom and Antioch" presented at the International Scientific Congress on the 1600th anniversary of John Chrysostom in Constantinople in 2007. Translated by John Sanidopoulos.
Click:

LIVE, BEYOND THE LIMITS!

Orthodoxy's Worship: The Sanctification of the Entire World
LOVERS OF TRUTH: THE LIFE OF HIEROMONK SERAPHIM ROSE
Lover of Truth: St John, The Wonderworker of San Francisco

St Anthony's orthodox monastery in Arizona
Patriarchal Stavropegic Monastery of St John the Baptist - Essex
The Impossibility of Aloneness: When Christ Found Me in the Himalayas
Two Deaths
Orthodoxy
Saints