The 'Death' of Anita Phillips 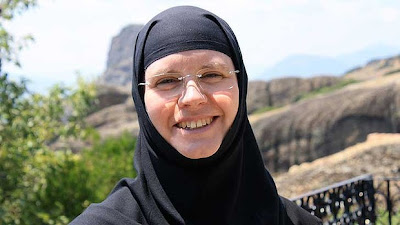 Along the ancient rock towers of Meteora a legend has flourished of an Australian tourist who stepped off a bus at a Greek Orthodox monastery and was never seen again.

Over decades, the tale peddled by tour guides has taken on a life of its own.

But at dusk on a summer evening, you can still find the Perth-raised woman once known as Anita Joy Phillips in full Orthodox monastic dress tending a garden at the back of the Saint Stephen's nunnery, her blue eyes smiling from underneath a tight-fitting black headpiece.

Saint Stephen's was established around 1400 and later converted into a nunnery housing up to 30 women, which for the past 21 years has included one Australian.

After taking her first "unbreakable vows" as a novice in 1993, Anita was renamed Sister Silouani.

Her namesake and inspiration, Saint Silouan, was a Russian-born monk of Mount Athos who was said to have achieved great humility and inner calm before his death.

The loss of a person's birth-name symbolises a "death to the world", according to scholarly descriptions of the transformation undertaken by all Greek Orthodox nuns and monks.

"Dead to the world but alive in Christ," explained Father Emmanuel Stamatiou from the Greek Orthodox Church of the Annunciation of Our Lady in West Perth.

"This notion of being dead to the world applies to all who claim to follow Christ but applies and is realised more fully by those who embrace a Monastic way of life."

In a rare interview with the Guardian newspaper in 2002, a North Yorkshire-based Greek Orthodox nun also described the full black gown worn by "tonsured" nuns as a display of worldly death.

"Our work is the work of corpses in the face of the world," she told the Guardian.
But in the eyes of her parents back in Australia, Anita Phillips is far from dead.

"Anita" was an athletic and social teenager, deeply involved in her high school basketball and swimming teams, according to her mother.

She was also an academic achiever.

After graduating with an economics degree from the prestigious University of Western Australia, a 20-year-old Anita "took herself off" to London with plans to further her business studies. She soon found herself in Athens where she started teaching English and learning Greek.

"She went into a church one day and I think she was just made so welcome and she just loved it so she just started going regularly," Mrs Phillips said.

"When we went over there in 1992 she was already quite religious."

She took her first vows the following year.

Was "Anita" interested in theology before her time in Greece? "Absolutely not," Mrs Phillips said.

Even Sister Silouani conceded her "calling" must seem a "strange" one for a girl from Perth.

Sitting against a stone wall to avoid the hot sun, the jovial 40-something recalled the events that led her to a serene life of prayer and isolation.

She spoke slowly in a broken Australian accent, her warm hands shooting out from under her robe as she shared a laugh or intimate detail.

The youngest of three children, Sister Silouani grew up in Como, and as the daughter of an inactive Catholic father and Protestant mother, attended Penrhos College before going on to university.

But in her mid-teens she had already began to question her fate.

Sister Silouani remembers a young Anita walking along Perth's coastline screaming at the waves, "please God, show me what to do and I will serve you for the rest of my life," she said.

The story spun by locals tells of a girl who returned to a tour bus from a half-hour stop at the nunnery demanding her luggage.

The bus driver who claims to have dropped her off tells his crowd - on a loop - of how he insisted Saint Stephen's was not a hotel, but the girl would not listen.

"Actually I'm pretty sure I took a taxi," Sister Silouani said after hearing the more colourful version. "And they would never take in somebody like that."

Nuns are vetted, the vows they take are sacred and unbreakable, there's no room for somebody to walk in off the street on a whim.

Being accepted into Saint Stephen's was a year-long process. 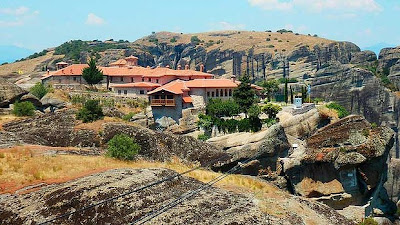 While living in Athens she visited the nunnery every other weekend and was allowed to take her first vows after only 12 months - an extreme exception to the typical years-long timetable, she said.

Her parents were "a bit surprised, but not concerned," when she called to let them know she was moving into the nunnery, Mrs Phillips said.

But one thing was certain: their daughter was never coming home.

"I knew it would be for the long haul, I never doubted that," Mrs Phillips said. "A lot of our friends said she'd be back, but I just never thought she would.

"She was always very determined."

Sister Silouani's life in the nunnery involves waking for church at 5am each day, joking that it doesn't take her long to do her hair and pick out something to wear.

The rest of her time is for prayer and her "jobs" in the wood workshop and tending to a farm owned by the nunnery.

Although the nuns are not allowed to use social media, they keep a well-worn telephone and Sister Silouani has pen pals across the globe.

She speaks to her parents once a week over the phone and there have been rare visits.
After two decades her mother still has "absolutely no idea", why her daughter chose to spend her life in an isolated Greek Orthodox nunnery.

"It must have fulfilled a need in her," she said. "But she's very happy and that's all you want for your children, isn't it?"

"She was never meant to be an economist."

Although she does miss "picnics on the beach" with her family, Sister Silouani said she would remain at St Stephen's until God advises her otherwise.

"When I left Perth I was just coming on a trip to Europe," she said.

Click:
A Journey to the Ancient Church: Evangelicals Discovering Orthodox Christianity
Aboriginal Parish in Australia
Three girls of July
"Let the mouth become basil and a rose": St. Sophia the Righteous, the "Ascetic of the Panagia"
A Deer Lost in Paradise

LIVE, BEYOND THE LIMITS!

LOVERS OF TRUTH: THE LIFE OF HIEROMONK SERAPHIM ROSE
Lover of Truth: St John, The Wonderworker of San Francisco
Orthodoxy's Worship: The Sanctification of the Entire World
St Anthony's orthodox monastery in Arizona
Patriarchal Stavropegic Monastery of St John the Baptist - Essex
The Impossibility of Aloneness: When Christ Found Me in the Himalayas
Two Deaths
Orthodoxy in the Heart of Africa - in the Ends of the Earth!
Orthodoxy Protestantism