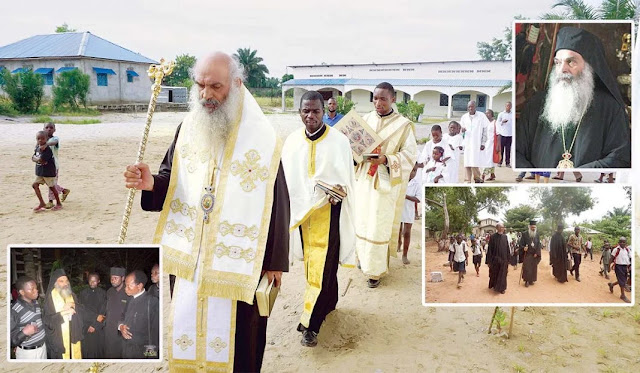 Newsbeezer.com (language editing for our blog Α.Ν., photo from here)

ΕΛΛΗΝΙΚΑ: Εκοιμήθη o Μητροπολίτης Κεντρώας Αφρικής (Κινσάσας) Νικηφόρος
Metropolitan of Kinshasa Nikiforos passed away today, Tuesday, July 27, 2021 at the age of 72. The hierarch - who belonged to the Patriarchate of Alexandria - had been infected by Covid-19 and was intubated in his hospital in Congo due to underlying diseases of the lungs and heart, and was transported by plane to the “Papanikolaou” hospital in Thessaloniki at the expense of the Political Commander of Mount Athos.  Athanasios Martinou.
According to information from Romfea.gr, Metropolitan of Kananga Theodosios is taking over as "Topotiritis" of the Holy Metropolis of Kinshasa .
When the Patriarch of Alexandria Theodoros II learned that Metropolitan Nikiforos had fallen asleep in the Lord, he performed the Holy Trisagion for the repose of his soul. Patriarch Theodoros later declared: “A remarkable official of the Patriarchate and an excellent figure of the Church”.

The Metropolitan of Kinshasa, Reverend and Exarch of the whole of the Equator, the venerable Nikiforos (according to George Constantinou) was born in Thessaloniki in 1949.

In 1971 he was tonsured a monk in the Holy Patriarchal and Stavropegian Monastery of the Holy Trinity of Tzagarolon, Chania. He was ordained a deacon on August 22nd of the same year.

In 1977 he retired to Mount Athos, was appointed professor at the Athonias Ecclesiastical Academy and afterwards as assistant scholar, and in 1988 at the proposal of the Holy Community of Mount Athos by the Ecumenical Patriarchate of Scholars.

In 1978 he was ordained an Elder by Theophilos. Bishop Chrysostom of Rodostolus, and was consecrated as Archimandrite by the Metropolitan of Ierissos and Mount Athos, Fr. Nikodemos.

In 1997 he left the school of Athonias and at the invitation of the Archbishop Anastasios of Albania, he took over the organization of the first ecclesiastical lyceum in Argyrokastro.

Since 2006 he has worked in the administration of the Orthodox University of the Congo “Agios Athanasios the Athonite”, where he also taught.

He wrote many scientific studies and participated in various conferences in Greece and abroad.

On October 7th, 2010 he was elected Metropolitan of Central Africa by the Holy Synod at the suggestion of the Pope and Patriarch Theodoros II of Alexandria and All Africa.
See also
ΜΗΤΡΟΠΟΛΙΤΗΣ ΚΙΝΣΑΣΑΣ ΝΙΚΗΦΟΡΟΣ (ενότητα)
The Metropolitan of Kinshasa Nikiforos fell asleep in the Lord. Le métropolite de Kinshasa Nikiforos s’est endormi dans le Seigneur.
Orthodox Democratic Republic of Congo
The orthodox christian parish of disableds persons in the Huileries of Kinshasa, Congo // Η Ενορία των αναπήρων στην συνοικία Huileries της Κινσάσα του Κονγκό
DEMOCRATIC REPUBLIC OF THE CONGO: AN ORTHODOX UNIVERSITY IN THE HEART OF AFRICA
Orthodox Mission in Tropical Africa
How “White” is the Orthodox Church?
We and the spirits of the departed
Theosis (deification): The True Purpose of Human Life
Αναρτήθηκε από ΝΕΚΡΟΣ ΓΙΑ ΤΟΝ ΚΟΣΜΟ στις 3:46 μ.μ.