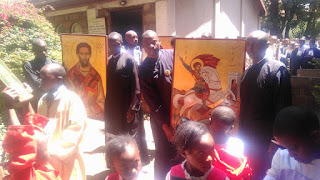 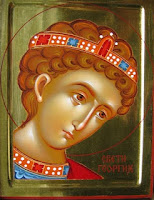 According to the church calendar, today is St George’s day: Friday 23rd April 2010 [Note of our blog: This year the feast of St. George moved to Monday following Easter, because it must necessarily be celebrated after Easter].
* Tone 2 – Week after PASCHA 3   Holy Glorious Great Martyr, Victorybearer and Wonderworker George (303)
Martyrs Anatolius and Protoleon, soldiers converted by witnessing the Martyrdom of St George (303)
Holy Martyr Queen Alexandra (303)
St Ibar, Missionary (499)
Martyrs Glycerius, Athanasius the Magician, Valerius, Donatus, and Therinus at Nicomedia
Blessed George of Shenkursk, Fool-for-Christ (1462)
New Martyr George of Ptolomais (1752)
New Martyr Lazarus of Bulgaria who suffered at Pergamus (1802)
Russian New Martyr Priest Egor (George) of Spas-Chekriak village (1918)
St George is one of those saints about whom little is known historically, yet he seems to be popular all over the world. After the Virgin Mary and the Apostles, there are probably more churches dedicated to Saint George than to almost any other saint.
He’s the patron saint of Georgia, Germany and Greece, if we just stick to countries whose names begin with the letter G. Then Canada, England, Lithuania, Russia, Palestine and Portugal.
Even though the population of Palestine is mainly Muslim today, Saint George was a Palestinian.
He is also the patron saint of several regions and cities, including Moscow, which is why there are so many Russian ikons of Saint George.
It is said that his cult was taken to England by crusaders returning from Palestine, and he became the patron saint of England. The English called on him for help in the battle of Agincourt, which was actually fought on Saint Crispin’s Day, but Saint George got the starring role, and in Shakespeare’s play Henry V the battlecry was “Cry God for Harry, England and St. George!”
Shakespeare himself was born and died on Saint George’s Day, but he didn’t just make it up. After the battle Saint George’s Day, 23 April, was as important as Christmas in England.
The English are a bit ambivalent about Saint George now. His emblem of a red cross on a white ground is the basis of the flag of England, which over the last few years has become more popular in England than the Union Jack. Some bloggers have written about him today. St. Aidan to Abbey Manor: St. George? Here Be Dragons, I’m with Aidan.:

Theologian Ian Bradley called for St. Aidan to be made the new patron saint of England. Not just England, but the entire UK: He said: ‘St George had nothing to do with Britain and his legend was brought back here with the Crusades. St Andrew similarly had no links with Scotland and St Patrick was born in Scotland or England and put into slavery by the Irish. On the other hand, St Aidan unites three of the countries by having lived there and is, I believe, a better symbol for Britishness.

Others, of a more English nationalist turn of mind, think differently, like nourishing obscurity | What is wrong with England?:

We’re incredibly disappointed that English people are afraid of displaying the St George’s Cross on our patron saint’s day. It was quite shocking to see some of the results, particularly the amount of people that don’t fly the flag because of fear of being judged. It just shows what political correctness has done to the English people over the years.

There are so many factors, not least being the concept of the Union Flag. One of the major reasons though is that we are now suffering the coming of age of a new generation of socialist miseducated children of ASBO susceptibilities, a process which really kicked in in the 70s, along with the disgruntled Gen X and its resentment of the Boomers plus the factor mentioned by Stephen Garnett – the debilitating PC pall which hangs over the land, embraced by so many.

Given the fairly recent history history of British imperialism and colonialism in many parts of Africa, it might seem to some that Saint George was a symbol and relic of colonialism. Many of the churches dedicated to him in Africa south of the Sahara were indeed built by English people, many of whom doubtless thought that they were planting a symbol of England on foreign soil.

But St George has been in Africa a long time, before England even existed. And he is just as much a symbol of anticolonialism as of colonialism, if not more so. Saint George is the patron saint of Ethiopia, and the Battle of Adwa, fought against the Italians in 1896, is as important for Ethiopians as the battle of Agincourt was for the English. And it was fought on the 1st of April, which is Saint George’s Day in Ethiopia.
The Scramble for Africa, which began in the mid-1880s, was led by the British and the French, and the Italians were late in coming to it. Virtually the only countries not already claimed by other European states were Ethiopia and Libya, and they set out to conquer those, and were repulsed.
The news that Ethiopia had defeated the Italians at the battle of Adwa in 1896 gave the Ethiopian movement in South Africa a tremendous boost. It showed that Europeans were not invincible, and for a while it boosted the popularity of the African Independent Churches (AICs) known as “Ethiopian”. For them, Ethiopian Christianity was a symbol of an African Christianity that was independent of Europe, and therefore independent of European colonialism. And so Saint George as patron saint of colonial powers like England is actually a pretty subversive symbol. He is just as much a symbol of anticolonialism, and so is perhaps a suitable symbol for a postcolonial age.
Troparion – Tone 4
You were bound for good deeds, O martyr of Christ: George;
by faith you conquered the torturer’s godlessness.
You were offered as a sacrifice pleasing to God;
thus you received the crown of victory.
Through your intercessions, forgiveness of sins is granted to all.
Kontakion – Tone 4
God raised you as his own gardener, O George,
for you have gathered for yourself the sheaves of virtue.
Having sown in tears, you now reap with joy;
you shed your blood in combat and won Christ as your crown.
Through your intercessions, forgiveness of sins is granted to all.
The life of the saint
The Holy Great Martyr George the Victory-Bearer, was a native of Cappadocia (a district in Asia Minor), and he grew up in a deeply believing Christian family. His father was martyred for Christ when George was still a child. His mother, owning lands in Palestine, moved there with her son and raised him in strict piety. When he became a man, St George entered into the service of the Roman army. He was handsome, brave and valiant in battle, and he came to the notice of the emperor Diocletian (284-305) and joined the imperial guard with the rank of comites, or military commander.
The pagan emperor, who did much for the restoration of Roman might, was clearly concerned with the danger presented to pagan civilization by the triumph of the Crucified Savior, and intensified his persecution against the Christians in the final years of his reign. Following the advice of the Senate at Nicomedia, Diocletian gave all his governors full freedom in their court proceedings against Christians, and he promised them his full support.
St George, when he heard the decision of the emperor, distributed all his wealth to the poor, freed his servants, and then appeared in the Senate. The brave soldier of Christ spoke out openly against the emperor’s designs. He confessed himself a Christian, and appealed to all to acknowledge Christ: “I am a servant of Christ, my God, and trusting in Him, I have come among you voluntarily, to bear witness concerning the Truth.”
For more, see here. 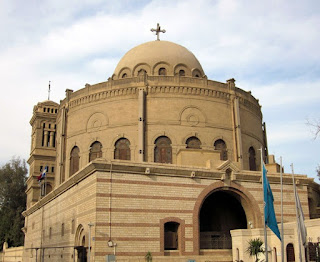 The historical Orthodox Church of St George in Cairo (from here) 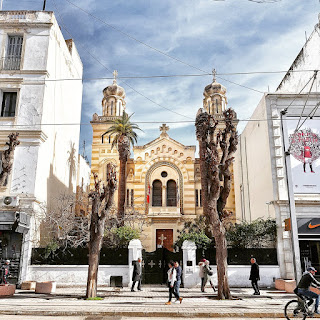 The historical Orthodox Church of St George in Tunis (from here).
More about the Ancient Christianity (Orthodox Church) in Tunisia here. 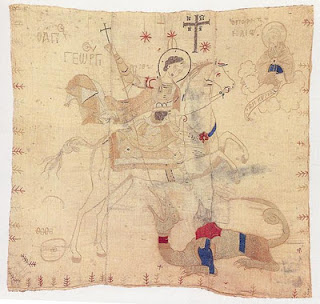