To See Him Face to Face

“The self resides in the face.” – Psychological Theorist, Sylvan Tompkins 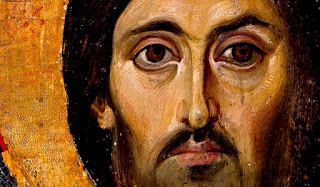 There is a thread running throughout the Scriptures that can be described as a “theology of the face.” In the Old Testament we hear a frequent refrain of “before Thy face,” and similar expressions. There are prayers beseeching God not to “hide His face.” Very clearly in Exodus, God tells Moses that “no one may see my face and live.” In the New Testament, there is a clear shift. The accounts of Christ’s transfiguration describe His face as shining. St. Paul speaks of seeing God “in the face of Jesus Christ.” He also speaks of us gazing steadily on Christ “with unveiled faces.” Orthodox Christianity has a very particular understanding of the face, modeled in the holy icons. It is worth some thought and reflection.
In both Latin and Greek, the word translated as “person,” actually refers to the face, or a mask (as a depiction of the face). The face is not only our primary presentation to the world, and our primary means of relationship, it is also, somehow, that which is most definitively identified with our existence as persons. Developmental psychologists say that the face-to-face gazing of mother and child in the act of nursing is an essential building block in the development of personality and the ability to relate to others.
It should be of note that the Holy Icons are always depicted facing us, with some few, turned ever so slightly. Those “turned” faces are found on icons whose placement would have originally been on an iconostasis and are slightly turned so as to be acknowledging the Christ icon. The only figures portrayed in profile are Judas Iscariot and the demons (or those who are fulfilling those roles). In the art of the Renaissance, and subsequent, this treatment of the face disappears. The human figure is simply studied for itself, as art, the relational function of the icon having been forgotten.

The Orthodox understanding of salvation is reflected in this treatment of icons. St. Paul’s description of being transformed as we behold the face of Christ is an expression of true personhood. Our “face” becomes more properly what it should be as we behold the face of Christ. This “looking” is, to a degree, what we today would call a “relationship,” though, I think, it has more insight and import. “Relationship” has become a word that is almost completely vacuous, lacking in substance. I cringe these days when I hear conversations about our “relationship” with God.
With the face, and its implications for personhood, much more can be said. I cannot see the face of another without looking at them. To see your face, I must reveal my face. That face-to-face encounter is pretty much the deepest and oldest experience we have as human beings (first experienced with our mother in nursing). For the whole of our lives, our faces are the primary points of experience and reaction. We cannot truly know the other without encountering them face-to-face.

It is probably significant that art turned away from the face and toward the figure. The language of salvation as “not going to hell” or “going to heaven,” is, strangely, impersonal. The same is true of justification and the like. It easily sounds like a medical procedure, a treatment of the body (or worse).
Similar to the face is the treatment of names. In Revelation, the image of salvation is the giving of a new name. In the Old Testament, this same thing happens to Abram (Abraham) and Jacob (Israel). In their cases, a new name signals a change in them and a change in their status before God. By the same token, it has always struck me as deeply personal and touching that Christ sometimes had nicknames for his disciples: “Peter” (“Rock”) and “Boanerges” for James and John (the “Sons of Thunder”). I suspect there were others. In the Orthodox tradition, a child is named on the eighth day after birth, or, if later, at Baptism. The giving of a name at Baptism is also a very ancient part of Baptism in the West.
In these things, we must understand that we are “known.” We are known uniquely and not by reputation or reference. We are not in a category, nor are we the “objects” of God’s love. That we are being changed by beholding the glory of God in the face of Jesus Christ suggests that we have to look at him – directly. This is very much part of the meaning of true communion.
Psychologists describe the bonding between mother and child in nursing (and face-to-face) as communion:


Identification begins as a visual process, but quickly becomes an internal imagery process, encompassing visual, auditory, and kinesthetic scenes. It is that universal scene of communion between mother and infant, accomplished through facial gazing in the midst of holding and rocking during breast or bottle feedings, that creates the infant’s sense of oceanic oneness or union. (Psychology of Shame, Kaufman, pg 31)

I was somewhat staggered to find such a theologically compatible statement in a work of technical psychology. Sometimes scientific observation is simply spot-on.
As we grow older, we never again gaze into the eyes of a person as we once did with our mothers. Lovers are often drawn to the eyes of the beloved, and find a measure of communion, but wounds and injuries eventually interrupt the initial innocence of such eyes. The same is at least as true with regard to God.
Regarding the face of God, there is this very telling passage in Revelation:


And the kings of the earth, the great men, the rich men, the commanders, the mighty men, every slave and every free man, hid themselves in the caves and in the rocks of the mountains, and said to the mountains and rocks, “Fall on us and hide us from the face of Him who sits on the throne and from the wrath of the Lamb! (Rev. 6:16)

It is of note that Revelation does not simply speak of the wrath of the Lamb, nor merely of His presence. It is specifically a fear of His face. Our experience of the face is an experience of nakedness and vulnerability. On the positive side, the result is identification, communion and oneness. On the negative side, it is the pain of shame and the felt need to hide. I can think of nothing else in nature that so closely parallels and reveals the fundamental character of our relationship with God. Salvation is communion. Sin is an enduring shame.
It is into this existential/ontological reality of sin/shame that Christ enters in His Incarnation, suffering and death. The depths of hell are everlasting shame and yet, He doesn’t hesitate to enter there in order to rescue us. Christ’s rescue of Adam and Eve in Hades are a final echo of the encounter in the Garden. They hid in shame, but He came looking for them. Then, He covered them with the skins of animals, but now He covers them in the righteousness of the Lamb who was slain. Then they were expelled from Paradise; now they are restored. Then, they fled from before His face; now they behold Him face to face – and rejoice.
When I pray before the icon of Christ, I notice that His gaze never changes. He does not hide Himself from my shame – but He bids me return my gaze to His. Unashamed, painless. You can find paradise in those eyes!