Selected miracles of St. George the Trophy-bearer to Muslims 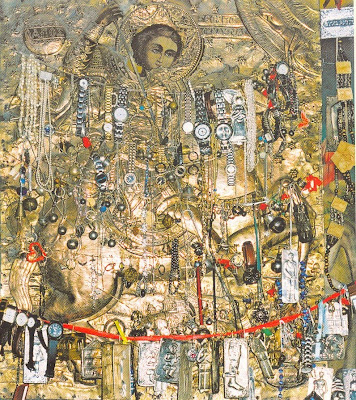 Miraculous icon of St. George Koudouna, covered with "tammata" from many miracles

Christ is risen! Truly He is risen!

The Monastery of St. George Koudounas (amateur translation and summary, along with the miracles below)

This historic Monastery, on Pringkiko (Prince's Island) outside of Constantinople, was according to tradition built by the Byzantine Emperor Nikephoros Phocas. It was later sacked in the Fourth Crusade, and its miraculous icon was lost for many years. Later, St. George appeared to a shepherd in a dream and told him where to find his icon. When he approached the area, he heard the ringing of bells, and having unearthed the icon, found it decorated with bells. This is the source behind the epithet "Koudouna". The Monastery was later attached to Agia Lavra, Kalavryta, and eventually to the Patriarch of Constantinople. The current church was built in 1905.
"The miracles of the Saint are many, not only towards Christians [Romans], who apprached always with great reverence (in the old times there wasn't a Christian family which had not visited Koudouna at least once a year), but towards everyone without exception, who approach his grace with faith. Thus there is a great mass of people who come from other faiths from throughout Turkey. The great iron gate of the Monastery, as we learn from its engraving in Greek and Turkish, was offered from the muslim Rasoul efenti, as a gift of gratitude towards the Saint for the healing of his wife.
"On April 23rd, in other words the day when the Saint is honored and the Monastery celebrates, tens of thousands of pilgrims arrive, not only from Constantinople but from other cities, to venerate the Great Martyr and to seek help in their problems. Roughly all of these pilgrims are from other faiths. Many will return later to thank St. George, who heard their prayer and granted their desire, brining the indispensible oil for his vigil lamp. You hear with feeling how he healed this person's son, how another became a mother after being barren for many years, how a third acquired a house, etc."
(See the following link for the full history of the Monastery in Greek, with many more pictures here).

Hieromonk Ephraim of Xenophontos, who has lived for three years at “Koudouna”, is astonished with the faith of the thousands of muslims who visit the monastery. 'These people live with their heart' he affirms and continues: 'Because faith is the sight and the strength of the heart, for this reason they can and they experience our Saints'. Monk Kallinikos of Xenophontos, who serves as a priest, relates: 'We are astonished with that which occurs here. We many times we see the finding of the Lord with the faith of the Roman centurion.' To our question if the Saint responds to the supplications of the thousands of pilgrims, he replied: 'During my three years here, we ourselves are witnesses of miracles, such as the healing of paralytics, mutes, and giving birth to children.'
"We asked the monks at St. George to comment about their stay in Turkey, and they told us: 'All of their behavior is perfect. From the highest ruler, to the lowest, they treat us with such respect that many times we wonder which would be better, to live in Christian Greece or muslim Turkey. We should tell you that we go everywhere with the monastic dress and our experiences have always been positive.'
Thus, therefore, St. George became a place of worship for thousands of atheists, Christians, Jews, and especially Muslims, who with every means come to the island and bring their tamata, and place them at the Saint, as they place their hopes in him. And the Saint shows that he does not judge and 'imparts healing' to every faithful person" (From here). 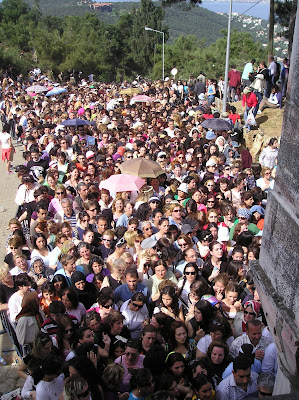 Mass of people gathered for the Feast of St. George Koudouna (the majority of them are Muslims, at least externally)

A Turkish woman from Levkochori had a serious health problem. She had heard a lot about St. George and wanted to come [venerate], but they did not let her come into the Church because she was Turkish. But this didn't deter her from remaining outside the Church the whole night. In the morning they gave her holy oil from the vigil lamp of the Saint and she became well. After this, her husband gave many gifts to the Church. (here)

A Muslim woman with her mother were taking a taxi for a long trip. The Muslims, as is well known, respect St. George very much.
On the road the taxi driver abandoned the proper course and began to show a threatening attitude towards the girl—the women apparently were praying—and at some point the taxi driver stopped the car and attempted to rape the girl. Immediately a police officer on horseback appeared, who ordered the taxi driver in a very powerful manner to the nearest police station. He went full of fear with the police man, and the police man on horseback went with him to the station, and issued a complaint for attempted rape. He signed the police book and left. When the taxi driver later came out of the interrogation, they looked in the book and said to him:
“There is no hope for you to escape! Do you know who brought you here?” Saint George. (From here)

NOTE: These and similar miracles and sentiments do not at all vindicate the false religion of islam, nor the terrible actions of some Turks against Christians, but the faith and love of some simple Muslims towards Christ and His Saints. As discussed above, Christ found in the Roman Centurion greater faith than any in Israel. (St. Matthew 8:10) And often, this presence of the Holy Spirit out of love not only acts to heal the bodies of non-Orthodox, but more crucially the souls, as many later embrace the light and are baptized Orthodox (see here). May Christ grant us all repentance, that we all may be saved, and come to the knowledge of the Truth! St. George the Trophy-bearer, intercede for us all and help us! Amen!

For more miracles which Christ, the Theotokos and the Saints worked for Muslims, see the following Greek page: here.

For the life of St. George the Great Martyr, see here 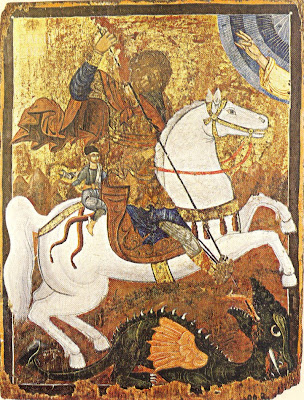 St. George the Trophy-bearer, the Great Martyr and Wonderworker
Christ is risen from the dead, by death, trampling down upon death, and to those in the tombs, bestowing life!
Truly the Lord is risen!
See also:

Tag about St. George
Büyük şehit aziz Georgios
A Miracle of the Virgin Mary in a Turkish Home of a Paris Suburb
From Islam to Christianity: Saints in the Way to the Lihgt
The Orthodox Christian sentiment regarding the persecutions of Christians by Islamists
Orthodoxy and Islam
Islam (tag)
Paul, the Christian equivalent to Mohammed

Orthodoxy's Worship: The Sanctification of the Entire World
LIVE, BEYOND THE LIMITS!
Travelers on the Way to the Light