Was St. Nicholas A Real Person?

Ελληνικά: Άγιος Νικόλαος: επιστημονικές επιβεβαιώσεις!!
Κινηματογραφική ταινία για τη ζωή του αγ. Νικολάου
Some say St. Nicholas existed only in legend, without any reliable historical record. Legends usually do grow out of real, actual events, though they may be embellished to make more interesting stories. Many of the St. Nicholas stories seem to be truth interwoven with imagination. However, the following facts of the life of St. Nicholas could contain some part of historical truth. They provide a clear sense of his personal characteristics which are further elaborated in other narratives.

Though the exact date is not known, it is believed to have occurred between AD 260 and 280. The place, Patara, can be historically grounded.

• Dowries for the poor girls

This story, distinct to Nicholas, can be regarded as historical in its essence. There are three very ancient accounts which only differ in regard to the number of maidens and other detail. This event reveals important aspects of St. Nicholas's personality, namely, his charitable nature and humility. This story is not found in hagiographic accounts of other saints' lives.

• Election as Bishop of Myra, though not yet a priest

Unusual though it was for a non-ordained person to be nominated to the position of bishop, two sources corroborate the story. Because it is so unusual, there are only two other such known cases (Saint Severus and Saint Ambrose), it adds credence to the story as it is not something that would be made up. *

• Participation in the Council of Nicaea

Although Bishop Nicholas does not appear on all lists of attenders, his name appears on the oldest Greek list and on five other lists.

This story is the oldest and most genuine recorded episode from the life of St. Nicholas. Historical documentation confirms the many references to place names and people. Some versions expand the account to include the story of the three generals.

• Intervention in favor of the unjustly jailed

The outstanding figures in this solidly structured story are well known in other contemporary accounts, where they are portrayed in similar ways.

• Destruction of the Temple of Artemis

This account reveals knowledge of detail concerning the temple which would have been unknown to a writer several centuries later had it not been based on an account coming out of the people and traditions of that city.

• Mariners saved during a tempest

The episode is important to explain the origin of his wide-spread patronage to sailors and other sea voyagers.
The earliest reference to St. Nicholas of Myra comes from the late 700s—about 250 years after his death. The life of St. Nicholas of Sion (a 6th century abbot of a mountain monastery near Myra) describes a visit "going down to the metropolis of Myra, [Nicholas of Sion] went off to the martyrium of the glorious Saint Nicholas." This reliable witness, written by a close associate of Nicholas of Sion shortly after his death, roots Nicholas of Myra in history and reveals his status as a revered saint.
The ancient sources cited to substantiate this information are Michael the Archimandrite, Sinaitic and Ethiopian manuscripts, Gratianus' Decretum, Theodore the Lector, Andrew of Crete, Eustratios of Constantinople, AD 583; Passionarium Romanum, 650 AD; and Praxis de tributo.

Saint Nicholas: Early Evidence
A look at early sources, including a summary of Michael the Archimandrite's Life, Works, and Miracles of our Holy Father Nicholas, Archbishop of Myra in Lycia

* Nicholas, who was raised by his uncle, an abbot, probably became a monk before his pilgrimage to the Holy Land. Selected as a Brother to become the Bishop of Myra, he would have been ordained a deacon, then priest in quick succession before ordination as a bishop. He would not have served as a deacon or priest.

Excerpt from the Encomium to St. Nicholas the Wonderworker by St. Andrew of Crete 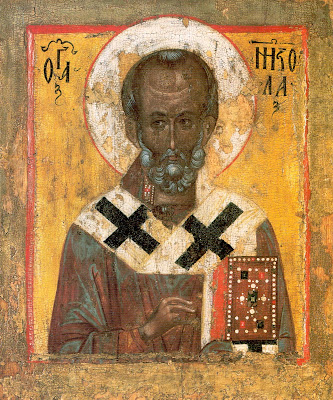 St. Nicholas the Wonderworker, Archbishop of Myra in Lycia (from here)
Excerpt from the Encomium to St. Nicholas the Wonderworker by St. Andrew of Crete (amateur translation) [from here]
O man of God and faithful healer, and steward of the mysteries of Christ, and man of desires of the spirit: receive from us this word offered as a gift, and grant grace to us, who take refuge in your paradoxical and fervent help. We therefore call you a pillar and foundation of the Church, and a light in the world due to the life you led. For many keys of virtue were granted to you, and no good things have escaped you, O perfect shepherd, and all-famed archpriest Nicholas. For in the golden treasury, your blessed soul clearly shines as most-precious stones founded by virtue, honored by all under the sun. For like a lamp placed upon a high stand, which shines with golden light upon the ends of the earth, were you previously on the archpriestly throne, unsurpassed, adorned with the true light of Christ, shining throughout the world as in a dark place.
And all are shepherded by you towards the light without night, as you shine as a torch-bearer. In your uplifted position, you are not only seen by those who approach you, but by those who have fallen into error by their spirit of knowledge, upon whom you shine with your light. For your angelic way of life was truly uplifted. You, the pure one, your godly-vision of things divine has truly rung out like a cry, reaching the vault of the heavens, and has gathered all. They have come to behold your many forms of virtues, from which your practical philosophy has gathered, as to your own honeycomb, from the various lives of the Saints, being therefore utterly sprinkled with virtues. For which of the virtues of the Saints were you not zealous for, O Father? Or which of the fragrances did you not rapidly pour forth? Or who equaled you in the virtues which you experienced, with which you were filled?
Abel the righteous, was glorified for his gifts. But you, O Father, gave to God as a gift your whole intellect. Enoch hoped in the Lord, and because of this hope, he beheld its effects. For though Enoch pleased God and was translated, through the state of your soul, you were totally translated from earth to heaven, having “amazed God”, flowing with the transformation of the coming age. Noah became righteous clearly from his sacrifices, for in his wooden ark, he saved living animals from the flood that covered the earth. You, with your holy and sacrificial mind offered mystical worship to God, and were shone another ark of the Church of Christ, and saved from heresies as many forms of animals, by the truth of your words.
Abraham's philanthropy and love of the divine is honored, and as he offered as a choice sacrifice his son by the command of God, he was blessed. You, however, gave refuge to Christ and fed Him daily, partaking with Him of His spiritual table, and instead of offering your son, offered yourself wholly as a sacrifice, and offered you life for your sheep, as the Gospel mentions. Issac is glorified for his righteousness, but you are the canon of righteousness, which runs everywhere in the spirit with much boldness, desiring to serve those who have been wronged, appearing to rulers during sleep. Jacob, by his simplicity of life and many children has become ever-memorable, and he beheld the ladder reaching the heavens, a mystery forming an icon of future things.
But you, O patriarch of generations, and shepherd, and sheep of the “Arch-shepherd” Christ, were entrusted with His flock, which you did not abandon. You were “uplifted, seated in your heart”, and were beheld from depth to depth, as moving from glory to glory, from earth to heaven, being lifted up by theoria. Job, from his innocence and due to his awesome steadfastness, was exalted. He, however, was not tested as you, who withstood the heresies, being seated as in a high tower surrounded by waves, which could not conquer your treasures. Joseph was famed for his continence and for granting grain. You, however, were the whole icon of continence, and the importer of grain to the eparchy of Lycia, which was enriched by the sweetness of your words. Moses, for his meekness, and preaching of the law to the people, became a god to Pharaoh, and led out Israel. You, however, O all-honored Father, were meek in all things, fearsome to sinners, a law-giver to all the people, abstaining from all vicious deeds, and drowning as another powerful Pharaoh, the revolts of the passions below the bay of your teachings. The brave David defeated the proud Goliath with the weapon of the spirit. You, however, were stronger than him, and daily conquered the noetic tyrrant-of-souls, and drove away the wolves of heretics from the flock of Christ, and have seized them.
Therefore the choir of the righteous and the prophets, beholding what you have formed, O most-holy one, through practical virtue, and your boldness, and your zeal, and your meekness, and your sympathy, and your exalted life were zealous for you. And not only them, but also the disciples of Christ, whose grace and truth have lifted the shadow of the law, through revealing to us clearly worship in spirit and truth. You became a follower of them in all things, the eye of the portion of the Church, and a sweet-sounding trumpet. Now it is said, according to that written word: “The memory of the just is celebrated with praises”, and “May the memory of the righteous be unto the ages”, and as is more so illustrated, “When the righteous man is praised, the many faithful rejoice.” (from here) 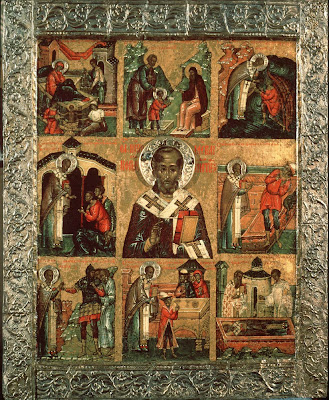