Gregory the Wonderworker & Bishop of Neo-Caesarea 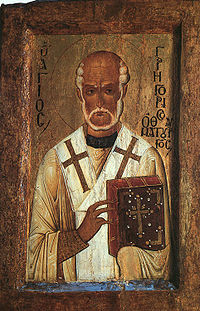 Saint Gregory was born in Neocaesarea of Pontus to parents who were not Christians. He studied in Athens, in Alexandria, in Beirut, and finally for five years in Caesarea of Palestine under Origen, by whom he was also instructed in the Faith of Christ. Then, in the year 240, he became bishop of his own city, wherein he found only seventeen Christians. By the time the Saint reposed about the year 265, there were only seventeen unbelievers left there. Virtually the whole duration of his episcopacy was a time of continual, marvellous wonders worked by him. Because of this, he received the surname "Wonderworker"; even the enemies of the truth called him a second Moses (see Saint Basil the Great's On the Holy Spirit, ch. 29).
Apolytikion in the Plagal of the Fourth Tone
By vigilance in prayer, and continuance in the working of wonders, thou didst acquire thine achievements as a surname; wherefore, intercede with Christ our God, O Father Gregory, to enlighten our souls, lest we sleep in sin unto death.
Kontakion in the Second Tone
Since thou hadst received the power to work miracles, thou dravest from men diseases, O wise Gregory, and with fearful signs thou madest the demons tremble; hence, thou art called Wonderworker, O man of God; for thou hast received thy surname from thy works.SOURCE
SAINT OR FEAST POSTED THIS DATE 2010 (with 2009's link here also and further, 2008's, even 2007!)


Writings of Thaumaturgus (Gregory the Wonderworker)