Women Saints Who Suffered Under Islam 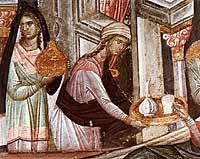 If we have not found ourselves in a Moslem environment due to increased migration and conversion to Islam, many of us have Moslem neighbours. Like all people, these neighbours are different but as a rule they don’t hide their faith or their conviction in its superiority but often make attempts to acquaint people with it.
It is a sad event when, as often happens, an Orthodox girl or woman marries a Moslem and perhaps even adopts Islam. Those who do not adopt it personally have to be prepared for their children becoming Moslems – such are laws of Islam. Practice shows that this results in family misfortune and the suffering and grief of these women.
If we think about it, this is not surprising. After all, it is not by mere chance the church forbids marriage between those of different faiths. Such marriage will not be consecrated by the church canons and therefore will not be blessed by God. Perhaps the main issue is that a married couple should be united in everything. It is a natural law and the desire of human souls. But if such unity is missing in the most essential thing – faith – it will not be present in other things. In the beginning mutual affection disguises this lack but without real unity as a foundation affection fades away fast. When this happens, inner discord inevitably shows up on the surface and under this or that pretext it will start darkening the marriage more and more as time goes on.
Some unhappy women, realizing this by intuition, adopt Islam. But practice shows that such a step doesn’t make the tempted women happy as apostasy is a heavy sin which, if not repented of, creates a heavy burden in this life. A lot of terrifying examples are known from the life of such “Russian Moslem women” whose husbands threw them out of their homes, took away their children, beat them, treated them as beasts. God cannot be profaned: we reap what we sow.
However there are cases, although not many, when an Orthodox girl convinced her Muslim fianc? to convert to the true faith. And after baptism and a church wedding such marriages were very strong and happy. To support these decisions we will recall several cases when Orthodox women of strong faith and love for Christ, after suffering from conflict with the Islamic world, could bring the great fruit of sacredness and prove the superiority of the true faith. 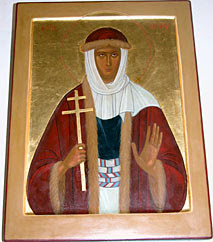 In the early 18th century in the Ottoman Empire, in the provincial town of Prusse there lived a beautiful Greek girl called Argery. She was brought up by pious parents and when she was young she met her love – a kind Greek youth. They got married in the church and their honeymoon was happy. But their Turkish neighbour was inflamed with lust towards Argery and tried with his sweet words to talk her into committing adultery in the absence of her husband. The pious wife declined his advances. Then the embittered Turk slandered her before the judge of Prusse by telling him that she had promised to become Moslem. According to the laws of Sharia, a person who expressed the wish to become Moslem must adopt Islam; if he denies thereafter he must be punished: for a man – death penalty, for a woman – life imprisonment. The judge, having believed the plaintiff, immediately put Argery into prison. Her husband, who thought the judgment was biased, demanded its transferal to Istanbul.
But it didn’t help. Both Argery and the Turkish plaintiff came to the court of the capital where the Moslem witnessed against her, giving the false evidence about her before the judge. Argery replied that she had never said anything like she was charged with She also said that she was not going to betray her faith; she was a Christian and wanted to die as a Christian. According to the judge’s order she was beaten and sentenced to life imprisonment.
She had fear, bitter separation with her beloved husband, the uncomforts of imprisonment, not to mention the regular insults from the Moslem criminals around her cell. Torment of the body, of the soul, of the heart, every day without interruption. And she could stop all this at any moment if she agrees to adopt Islam…
But spiritual joy helped her to overcome the sufferings and temptations. The martyr herself exhausted her body with fasting and other kinds of abstinence as was witnessed by other Christian women who were imprisoned together with the saint and later released.
So, she laboured in the prison during seventeen years. The saint’s heart was filled for joy because she labored for Christ. She considered her imprisonment such consolation that when one Christian called Manuil Curtsibasis offered her freedom she refused, choosing the prison rather than honor and freedom. In such a way, imprisoned for the sake of Christ, she passed away on 30th April 1725. Her holy relics were laid in the church of St. Paraskevi by the blessing of Patriarch Paisios and up until today the faithful venerate them.

A Rodopian martyr, Khadijah-Maria, stands apart among Bulgarian new martyrs. Born to an Islamized Bulgarian family in the 19th century, Khadijah came back to the Orthodox Church. She was baptized in an old chapel so that her conversion was kept secret. The priest Konstantin (future bishop and metropolitan of Xanphia Illarion), baptized her in a big barrel. The new Christian concealed her baptism for a whole year. She sent candles and blessed bread to the church while she prayed at home.
But rumour was spreading all over the whole village. Women secretly called her Tijah-Maria (Tijah is the Bulgarian version of the girl’s Turkish name), because her baptismal name was Maria. When her fanatical brothers came to Derekjoy, they heard this rumour and confronted her to find out if it was true. She denied that she had been baptized. The next year Tijah-Maria was preparing herself for Pascha: colouring the eggs, cooking the Easter cakes, making candles, kneading dough for the Communion bread. Her brothers who lived in another village came secretly to check the rumours. On Holy Thursday she came back from the church and stepped away to her neighbours. Meanwhile her brothers entered her house. There they found the coloured eggs, Easter cakes, and burning icon-lamp. They became sure that she had become “infidel”. Her brothers hid themselves in the hay. In the evening Tijah-Maria returned and, after long prayers, went to bed and fell asleep. While she slept, her embittered Moslem brothers began to strangle her. When she was half-strangled, they filled her mouth with rags, took her out of the house and under the big blossoming plum tree and shot her twice. The next morning the women sent their children to find out what had happened in Tijah’s house. They saw her lying dead under the blossoming plum tree. She lay there as she was for three days since everybody was afraid to come and see that she was dead. A rose was planted on her grave and on St. George’s Day the women picked flowers from the rose bush, which they kept throughout the year for healing.

About the same time, there was a Russian girl living in a Tartar family. Having learned from missionaries about the Orthodox Faith and loving Christ with all her heart, she decided to be baptized. However, her parents decided to marry her to a fellow-villager without asking her opinion or consent. Her love for Christ was stronger than her love for her parents and so on the eve of the wedding she escaped from home.
She took shelter in a woman’s monastery. There she was baptized, learnt the church canons and in time took the veil under the name Platonide. Some years later she was blessed to live the life of a hermit. She left for the solitary places of the Yekaterinburg region and in the wild forests close to the town of Revda she built a cell. She prayed, and a spring appeared nearby. There she laboured, filling her life with spiritual deeds.
Fanatic natives of her home were seeking for the chance to kill her but for the sake of holiness of the ascetic a bear protected her. Later the bear was killed and they succeeded in shooting her, as they were afraid to approach her closely. Thus, in witnessing for Christ, she received the martyr’s crown.
She was buried in the place of her struggles. Her followers erected a chapel over the Matushka’s grave, which stood until the Revolution. Her spring, called by the name of Platonide, became famous as wonder-working. Before the Revolution, and even in Soviet times, many pilgrims came to it to worship the martyr. Even today we know of wonderful miracles worked through it. For example, last year the local newspaper had a story about a little boy who had been lost in the forest and found safe by the spring of Platonide. This is how God glorified his follower.
Today many Moslem girls and women follow these saints in accepting Christ and finding the joy which relieves all burdens. For example, in Perm Tartar parents drove their daughter out of her home because she was baptized. The Kazakh artist of culture, documentary filmmaker Elza Dilmukhammedova was converted to Orthodoxy. Recently Nazima Khanafi Muhammed, the direct granddaughter of Imam Shamil, the head of Chechen people in the war against Russia in 19th century, has also been converted to Orthodoxy. Thus the power of God overcomes human frailty and wins over all adversities.

Paul, the Christian equivalent to Mohammed

ŞEHİT AHMET - Two Turkish Saints
A Mysterious Mass Conversion From Islam to Christianity in Georgia
Orthodoxy's Worship: The Sanctification of the Entire World
Holy Neomartyr Chryse as a Model for our Lives
LIVE, BEYOND THE LIMITS!
Orthodoxy is being destroyed in Syria