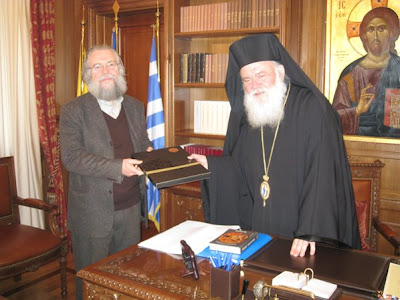 ΟRA ET LABORA
ΓΙΑ ΤΟΝ ΙΔΙΟ ΕΛΛΗΝΙΚΑ
Jean-Claude Larchet is one of the most important and interesting Orthodox scholars writing today. Born in 1949, Dr Larchet holds doctorates in philosophy (1987) and theology (1994). The author of fifteen books, his three volumes on St Maximos the Confessor – La Divinisation de l'homme selon saint Maxime le Confesseur (1996), Maxime le Confesseur, médiateur entre l'Orient et l'Occident (1998), and Saint Maxime le Confesseur (2003) – are widely acknowledged as among the best studies of this great saint and theologian published in any lanaguage. Equally remarkable is his three-part series on illness and healing in the Patristic tradition: Théologie de la maladie (1991), Thérapeutique des maladies mentales (1992), and Thérapeutique des maladies spirituelles (1997). The first two volumes have appeared in English translation under the titles The Theology of Illness (2002) and Mental Disorders and Spiritual Healing (2005). Unfortunately, the third volume – the masterpiece of the trilogy, and the heftiest (864 pages in French) – has not yet appeared in English, although a short excerpt has appeared in Divine Ascent (No 11, Lent 2008). Dr Larchet is one of the very few contemporary authors who is able seamlessly to combine rigorous scholarship with a vibrant sense of the inner life of the Church.

News items in Greek and French report that the third volume of Dr Larchet's trilogy – The Therapy of Spiritual Illness – has now been released in Greek translation (under the title Η θεραπευτική των πνευματικών νοσημάτων - Εισαγωγή στην ασκητική παράδοση της Ορθοδόξου Εκκλησίας) by Apostoliki Diakonia, the official imprint of the Church of Greece. The Greek edition (in two volumes) was official released at a major function held in Athens on Wednesday, April 7, 2009, attended by over 200 people, including several hierarchs, many clergy, and representatives the Theology Faculty of the University of Athens. The event was opened by Metropolitan Damaskinos, a member of the Holy Synod, who read a letter of greeting from the Primate of the Church of Greece, Archbishop Ieronymos II of Athens and All Greece. Further remarks were offered by Bishop Agathangelos, general editor of Apostoliki Diakonia; Metropolitan Hierotheos of Nafpaktos, who is well known for his own works written in a similar vein; Hieromonk Damianos of Mt Athos, who is trained both as a doctor and a theologian; Stylianos Papadopoulos, professor emeritus of patrology at the Theological Faculty of the University of Athens; and, finally, the author himself, who expressed his gratitude to the translators and publishers of his work. On the following day Dr Larchet was interviewed for the Church of Greece's radio station and received by His Beatitude, Archbishop Ieronymos.

Here's hoping that an English translation of this volume is forthcoming!

A few scattered items by Dr Larchet can be found online in English translation:
Photograph: Archbishop Ieronymos and Jean-Claude Larchet, April 8, 2009.
UPDATE: Dr Larchet himself was kind enough to inform me that an English translation of The Therapy of Spiritual Illness is forthcoming from Alexander Press.
Αναρτήθηκε από ΝΕΚΡΟΣ ΓΙΑ ΤΟΝ ΚΟΣΜΟ στις 8:40 μ.μ.