Outreach to the refugees and migrants currently in Greece

Our migrant friend,
Our refugee friend,

In this land of ours you will find a treasure which for 2000 years is being given away freely, with no discriminations, to all who truly desire to acquire it.  This treasure is called “a personal relationship with God”, which we would like to share with you, as it is the most valuable treasure that we have.

God fashioned us out of love. Every single day He grants life to the world that He created, without asking for anything in return; He rejoices, when we have a loving relationship with Him.  2000 years ago, our Creator condescended to be born in the flesh as a human; He walked among us and with His exemplary holy life showed us how He wants mankind to live and to become perfect, like He is.  We came to know Him with the name “Jesus Christ”.

Jesus was born in the flesh through the power of the Holy Spirit, in the small town of Bethlehem and His earthly Mother was a virgin, named Maria.  The God of the heavens had likewise become a migrant – on Earth – so that we could become acquainted with Him.  He remained among us for 33 years, until He was put to death on a Cross, because we humans often do not realize what we are doing. 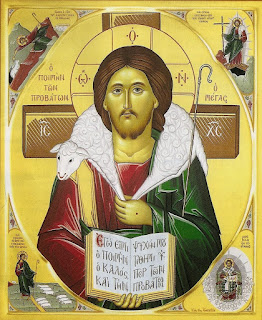 During His sojourn on Earth, He revealed to us that God is Love, and that the One and Only God consists of three inseparable Persons:  the Father, the Son and the Holy Spirit.  When Jesus, the Son of God, rose from the dead and returned to the Father, he sent us the Holy Spirit. The Holy Spirit guides us to the loving relationship that exists between the three Persons of Godhood, and also unites us with them, as adopted children of God. This relationship is a personal one, between God and mankind.  And this is the teaching of the Orthodox Christian Church, which Jesus Christ Himself had founded.

God has given us the right to live the way we desire – either to willingly seek Him, or to reject Him as if He doesn’t exist.  And yet, He continues to grant His sunlight and rain, both to good and bad people, without harboring a grudge with any of His creatures.  However, for those who want to know Him and who strive to be like Him, He provided them with a PATH that will lead to heaven, where He has in store certain gifts “that no eye has ever seen and no ear has ever heard, and no heart has ever understood”.  They are able to transcend the boundaries of space and time the way that He did; they can resemble the Infinite One for all eternity and savour His superior life, in a loving relationship with Him. This is what is called “Paradise”.

We are free to be joined to our Creator, within His “Body”

On departing from this world, Christ sent forth His friends – the Apostles – so that they might invite all of mankind into His “Body” – the Church – through their evangelizing the Gospel (that is, by spreading the good news about God’s plan for our salvation).  Jesus did not leave them on their own: 50 days after His death and His Resurrection from the dead, He sent them the Holy Spirit, Who would help and accompany them in their struggle to become like Him.  When it was time to leave this life to be united with Jesus in Heaven, they in turn left Prophets and Bishops in their stead, who assigned Presbyters in charge of the local Churches, where all the Sacred Mysteries take place that help mankind to become united with its Creator and become acquainted with Him in person.

One such initiation is the practice of confession, where a person comes to acknowledge the sins he has committed in his life and seeks to be reconciled with God.  God then accepts him, through another Mystery, of holy Baptism.  With his immersion in water, man casts off his “bad, former self” and on emerging from the water of Baptism, he is reborn as a new person, cleansed of sins, and adopted by God, the heavenly Father. Then, in yet another Mystery, he received from the Priest’s hands the Body and the Blood of Christ, in the form of “bread” and “wine”, so that he will also be actually united with Him, Who had shed His blood and offered His Body for the salvation of man.  In this manner, man thereafter becomes a participant in the Body of the Godman (the Church); he receives God’s Holy Spirit, and begins to live God’s way of life from then on.

God “emigrated” for our sake, by becoming a man.

Jesus Christ did not buy a home, nor had a bed of His own, or a pillow!  He was a “migrant” from heaven, Who knew He would return to His heavenly home after His 33 years of living among us in the flesh.  This was why He did not amass any fortune or become wealthy.  He taught us that WE ARE ALL “foreigners and passers-by” on this Earth and that none of us will remain here for all eternity.  He showed us the Migrants’ way – whose homeland is not down here, but up there: the heavenly homeland.

This is why we love strangers and are looking forward to “another, heavenly homeland”, according to the words of Jesus’ Apostle, Paul.  We do not concern ourselves with the colour and the land of origin of our fellow-man, as we are all brethren and creatures of the One, Same God, and we all have the same invitation by our Creator, for the true, eternal homeland for all of us.

For more than 2000 years in this land, millions of people have lived and died with this hope; you may find here people who might exploit you or hate you, but you will also find people who will love you as their brother and townsman. People, who albeit born here, likewise feel like strangers as you do, and await the time when the Lord Jesus Christ returns to take us to our true Homeland!

In this land, if you so wish, you can learn even more:  in our Orthodox temples you will find people who know how to talk to you about all these wonderful things.  Regardless how much time you have at your disposal, one hour a week is enough to research for details.

At the bottom of this pamphlet you will find ways to communicate in order to learn more, and to become acquainted with the Path that leads every stranger on earth to heaven!