History of the Orthodox Mission in Pakistan 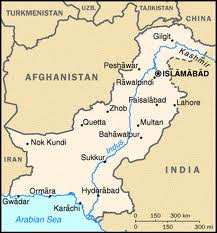 ORTHODOX PAKISTAN
ΛΙΓΑ ΛΟΓΙΑ ΣΤΑ ΕΛΛΗΝΙΚΑ
There are currently over 400 Orthodox faithful in the country of Pakistan. A native Pakistani, Fr. John Tanveer, is their spiritual leader, being the only Orthodox priest in the country. The Orthodox Mission is under the omophorion of Metropolitan Nektarios of the Greek Orthodox Metropolitanate of Hong Kong and South East Asia. The Orthodox Mission in Pakistan was initiated by the Archbishop Nikitas in 2005 and was formalized upon the ordination of Fr. John in November 2009 by Metropolitan Nektarios. The church is located in Lahore, however there is no physical church building. All liturgical services are held out of a small room in Fr. John and Presbytera Rosy’s home where approximately 40‐50 faithful attend Divine Liturgy every Sunday.
Fr. John was born into a Roman Catholic family and was the third of six children. His deep zealous for the faith and thirst for learning later led him to be ordained as a Roman Catholic priest in 1986 after completing 10 years of seminary training. For over 10 years, Fr. John served the Lahore Diocese with enthusiasm as a priest and instructor at the seminary in Lahore. However, during the course of teaching, studying, praying and reading, he came to learn about the Orthodox Church. This he thought was “the One, Holy, Catholic and Apostolic Church.”
Since the Roman Catholic hierarchy did not allow any Orthodox materials or books, he began using the internet to learn more about the faith and incorporate its teachings into his lessons and sermons. Then in 1996, Fr. John finally spoke to his bishop and told him that in his study of the Orthodox Church, he had discovered many differences in the teachings of the two churches. He said, “I must see who these Orthodox are.” His bishop tried to discourage his interest, but he resigned from his pastoral duties and left the Roman Catholic priesthood. Due to cultural pressures in an Islamic country, Fr. John married Presbytera Rosy in 1997 and soon began a family. They now have three children ages 15, 12 and 10, and as a family they have continued their life‐long journey of “becoming Orthodox.” 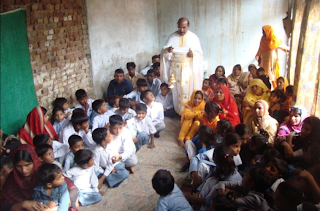 Upon leaving the Roman Catholic Church in 1996, the hierarchy made it very difficult for Fr. John to obtain work elsewhere. However, he was able to obtain a job at the International Press newspaper in Lahore where he earned a living by being a journalist and writing various articles. He was not going to church at the time, but began looking for a true spiritual home by reading and searching about the Orthodox faith. In July 1998, Fr. John submitted a letter to a Greek man he had met in Lahore years before, inquiring about how to become Orthodox. This man forwarded his letter where it finally ended up in the hands of Metropolitan Nikitas of Hong Kong and South East Asia. In October 1998, Fr. John received a letter from Metropolitan Nikitas inviting him to enter into a dialogue of how to become Orthodox. After learning of Fr. John’s background, Met. Nikitas advised that Fr. John begin learning either Greek or Russian in order to be admitted to an Orthodox seminary. After the original contact, Metropolitan Nikitas and Fr. John were out of contact for some time, but met in person in 2003, where Fr. John shared with His Eminence how he had been evangelizing others to the Orthodox faith. Again there was a long silence, and then in 2005, Metropolitan Nikitas visited Pakistan again and baptized and Chrismated 300 people into the Orthodox faith in Pakistan. The Orthodox Mission in Pakistan was officially registered with the Government of Pakistan shortly thereafter and Fr. John (although not officially an Orthodox priest yet) continued his pastoral activities, evangelizing others through conferences and seminars.
After being Chrismated in 2005, Fr. John knew he wanted to re-enter the priesthood and so he began preparing for his holy duty. Fr. John was asked to apply to Holy Cross Seminary in the United States in 2005 and 2006, however neither opportunity materialized as Father was declined a visa to the United States both times. Instead, he received the materials to prepare and study for ordination, and in 2007, he was sent to St. Nicholas Monastery in Tripoli, Greece for three months to study and prepare for ordination. However, due to the turnover at the Metropolitinate, Fr. John’s ordination was delayed yet again. After Archbishop Nikitas` transfer to be the Director of the Patriarch Athenagoras Orthodox Institute in Los Angeles, California in 2008, the Holy Synod of the Church of Constantinople elected Archmandrite Nektarios as the next Metropolitan of Hong Kong and Southeast Asia. This shift in hierarchy and structure slowed Fr. John`s plans of being ordained in 2007, however his pastoral activities in Pakistan did not cease. Finally, in November 2008, Metropolitan Nektarios ordained Fr. John as a deacon on November 15 and on the following day, ordained him as priest in Athens, Greece.
Despite a severe lack of financial resources, the Orthodox Mission in Pakistan provides a wide range of support to its faithful and others in the community including education, healthcare, financial assistance and counseling to orphans, aged, infirm or afflicted including various awareness programs. Their own livelihoods have been sacrificed in support of the Church, but they joyously and faithfully stay the course God has laid before them. They have been financially supported solely with Presbytera’s salary, where up until August 31 she worked at a private Roman Catholic school teaching English. However, she was forced to leave the school the day before the start of the new school term because she is Orthodox. In addition, they are forced to find alternative means of education for their three children who are studying at the same institution.
In light of the recent flooding that devastated the entire country of Pakistan, not to mention the countless suicide bombings and otherwise unstable environment, Fr. John and the Orthodox Mission in Pakistan are in need of our assistance now more than ever. Due to a complete loss of salary, the Tanveers need financial support to not only survive, but to also continue and expand the pastoral activities of the Orthodox Mission in Pakistan. Please join us in praying for this faithful priest and his family and by considering how you can support the Orthodox Mission in Pakistan.
Thank you.
ΥΓ. Το Πακιστάν είναι μια επικίνδυνη χώρα για τους χριστιανούς. Ο Θεός να ευλογεί και να στηρίζει τους αδελφούς.
Αναρτήθηκε από ΝΕΚΡΟΣ ΓΙΑ ΤΟΝ ΚΟΣΜΟ στις 11:42 π.μ.