The Brussels massacre, Europe’s lamentation and exploitation of peoples… 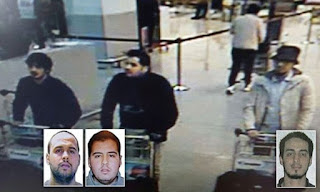 Western Europe has been shaken and trembling of late, after having suffered terrorist attacks by Muslim extremists on its territories.

However it doesn’t appear to have been shaken or trembling over the inconceivable violence that the same Muslim extremists have been inflicting for years on the peoples of Asia and Africa, who have been living under conditions of living hell.

Europe is not shaking or trembling (nor has it apologized or made restitution) for the violence and the exploitation that the “third world” peoples have been subjected to by the European colonialist powers (countries and multinational companies).

Naturally, those same countries and companies who are the true governors of those lands are also exploiting the European peoples, by converting them into masses of uncontrollable consumers.

Minuscule and impoverished Greece (an Orthodox Christian land) was and continues to be a perpetual victim of west European capitalists and colonialists (and additionally a victim of Ottoman Muslims for entire centuries), as have been other countries of Eastern Europe – the majority of which are Orthodox Christian.

Albeit wounded by the economic crisis and at the mercy of the European colonialists, Greece has not turned her back to the thousands of refugees who have been swarming in from Asia and Africa in order to escape from the Islamist threat. In contrast, the wealthy Europeans have closed their borders, terrified and refusing to provide hospitality to them…

Our country – like every other country – also has capitalists and corrupt individuals who exploit our people. We too have our “pros” and “cons”, like every other people. But we also have very many Saints and Martyrs who have lived in our homeland. We may not be perfect; nevertheless, we are at the side of our brethren the refugees, without a thought of seeking possible gain.

And that is the mark of the Orthodox Church: a civilization of love. The love that Jesus Christ had taught us: the love that leads a person to Christ and, through Christ, to the One, true God.

And if there is one thing that our homeland offers to the History of mankind, it is precisely that civilization which shapes hearts and, with the help of Jesus Christ and His Saints, can transform hell into a paradise…

For the thousands of migrants who make the sea crossing to Greece: ‘We are monsters if we don’t do this’ — Greek islanders on front line of crisis
Fr. Eustratios Demou (papa Stratis), a Good Samaritan of migrants in Greece († September 2, 2015). Memory Eternal!
Orthodox Church & Capitalism: Orthodox Fathers of Church on poverty, wealth and social justice


Grace and “the Inverted Pyramid”
Église orthodoxe Pères, la richesse et le capitalisme
Fathers of Church & Capitalism : Interest, Usury, Capitalism
A Letter from an Orthodox Christian to our Native Americans Brothers Orthodox Mission in Tropical Africa (& the Decolonization of Africa)
Miley Cyrus, or: why Orthodox Mission in the West is an urgent need...

A Saint Speaks To Europe From Dachau (1), (2), (3), (4)
The Way - An introduction to the Orthodox Faith
"Partakers of Divine Nature" - About Deification & Uncreated Light in Orthodox Church
Theosis (deification): The True Purpose of Human Life
Theosis, St. Silouan and Elder Sophrony
The Orthodox Christian sentiment regarding the persecutions of Christians by Islamist
Paul, the Christian equivalent to Mohammed
The Penalties for Apostasy in Islam
Jihadists - ISIS & al Qaeda in Africa
Islam (tag)
New martyrs
New Martyrs under Turks